Plans can’t be made in silos 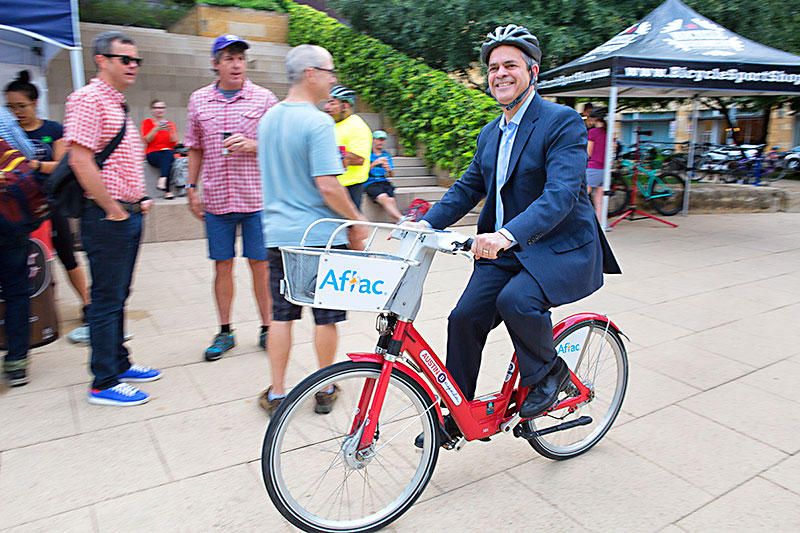 Mayor Steve Adler, riding one of Austin's many modes of transportation, although hopefully not exclusively on the sidewalk on his way to work Downtown. The rapidly developing Austin Strategic Moblity Plan will soon see the city's mobility initiatives coalesce with CodeNEXT. (Photo by Jana Birchum)

It's been a busy week for the city's Planning Commission: a special called CodeNEXT meeting last Thursday, plus a regular meeting Tuesday that briefly dove back into Thursday's discussion. This week, attention turns to the developing Austin Strategic Mobility Plan and Capital Metro's like-minded projects, and how they both might play along with the new code.

Transportation Department Assistant Dir­ec­tor Annick Beaudet provided commissioners with a preview of that mobility plan, an update to the Austin Metropolitan Area Transportation Plan that's been in effect since 1995. The effort is run by Kimley-Horn, the same firm subconsulting on transportation for Opticos Design on CodeNEXT. It was ultimately Kimley-Horn's familiarity with the zoning rewrite that inspired ATD to reach out for the mobility plan; Beaudet called the cross-plan synergy a "best outcome for the city." Kimley-Horn is already a year into what ATD anticipates being a two-year process; Beaudet said the department hopes City Coun­cil can adopt the final plan in the spring of 2019.

ATD has spent the first year of the effort running public outreach, with a focus specifically on underserved communities (including minorities, seniors, youth, and folks with limited mobility), and working closely with Capital Metro's Project Con­nect. The U.S. Department of Transporta­tion mode share numbers (which track how people 18 and older get to work) indicate that 74% of Austin workers commute alone each day, accounting for a bulk of the city's traffic congestion. Population projections hope that by 2040 Austin will achieve a 50-50 split, with only half its residents driving to work; even with that balance, traffic is expected to stay the same unless a plan is installed that changes matters.

The ASMP will include policies, programs, and projects to help adopt the plan, as well as an updated "roadway table." The inventory of Austin's streets will note what they are today and where they need to be in the future to help "manage our growth and transportation demand," said Beaudet. Multimodal options will be addressed by examining the width of roadways, number of car lanes and bike lanes, and types of transit on each street.

Staff are currently in the process of mapping three mode share scenarios to examine what happens if the city:

1) keeps doing what it's been doing;

2) increases investment in centers or corridors;

3) only invests in Imagine Austin corridors and activity centers.

Conceptualized scenarios will be presented to the public in February, and from there ATD will work out an actual plan. That's when CodeNEXT comes into play: The land use code is how ATD acquires right-of-ways for roadways, and easement for transportation usage.

Transportation talk continued on Tuesday with a presentation by Capital Metro Exec­u­tive Vice President Todd Hemingson. Connections 2025 (to be implemented in June, see "Cap Metro Hangs Hopes on 'Connections 2025'," Nov. 3, 2017) and Project Connect (the more long-term, comprehensive strategy) are Cap Metro's two plans to increase public transit ridership and reduce the number of cars on city streets. For example, the agency is currently looking into what happens if today's turn lanes are transformed into bus lanes. Hemingson told commissioners this simple switch could double or triple the movement on roadways, and help maximize corridor use. Their findings will be unveiled in draft form next month for public comment.

Commissioners still had questions for Hem­ing­son. PC Chair Stephen Oliver asked how Cap Metro's planning can be best used to inform the next several months of CodeNEXT conversations. Hemingson suggested both sides look at the corridors again to ensure their plans are fully aligned. He also stressed that housing and job density "generally equates" to higher levels of transit users. Commissioner Trinity White followed by specifically asking about the importance of mixed-use zoning, something CodeNEXT's second draft brought to a number of areas that are currently zoned for commercial only. Hemingson called the mixing of uses "absolutely critical."

Closing out on Thursday, Oliver proposed an updated timeline for the commission to review the third and supposedly final draft of CodeNEXT (out Feb. 12) and get it to Council as soon as possible. Under the city's original timeline, Council was supposed to take the language up in April. But since November's delay, land use commissioners (from both PC and Zoning and Platting) have been concerned about how much time they'll get to digest draft three before issuing their recommendations to Council. Oliver's "relatively aggressive" timeline proposed that Council receives those recommendations by May. If that becomes the case, Council likely wouldn't vote on CodeNEXT until at least July.

PC and ZAP pick up CodeNEXT again on Tuesday, Jan. 30. As for ASMP, Beaudet invites residents to the Central Library (710 W. Cesar Chavez) on Saturday, Feb. 24, to begin the second round of public engagement. And though dates have not yet been set, commissioners will hear more from ASMP and Cap Metro. As Hemingson said, these plans can't be made in silos. "It's a chicken or the egg scenario," he said. "We can't lead one without the other, but I think we're off to a good start."

A version of this article appeared in print on January 26, 2018 with the headline: Plans Can’t Be Made in Silos 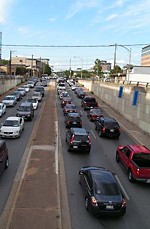 Developing Stories: 'Every Day It's Getting Worse'
Strategic Mobility Plan marks a way out of permanent gridlock