Mayor shares his vision for Austin's next four years 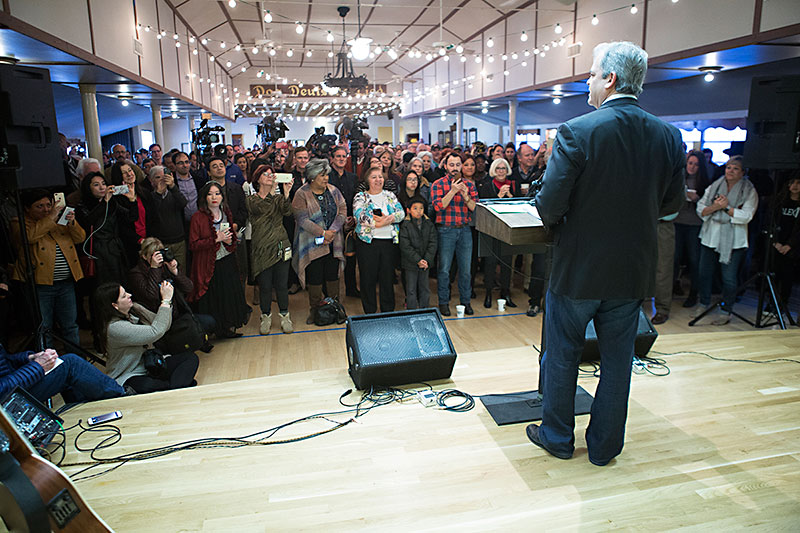 On Sunday afternoon, Mayor Steve Adler formally initiated his 2018 re-election campaign before a packed house at Saenger­run­de Hall. Introduced by supporters ranging from state Sen. Kirk Watson to U.S. Rep. Lloyd Doggett, Adler asked the crowd to help him "keep doing the job we started," recounted city accomplishments since 2014, and announced his priorities for another four-year term.

The next day, I sat down with Adler at Austin Java's City Hall location for a conversation about his campaign priorities, his sense of Austin's current challenges, and plans for another term. He said he welcomes the coming months. "Campaigns provide an opportunity to talk with the community, to get your message out, and to get feedback," he said. "It's where community issues are laid out, and I do enjoy the process – and it means that if re-elected, I'll be a better mayor."

In his kickoff speech, Adler had described what he called "the Austin paradox." Asked to elaborate, he said, "The city is growing rapidly – every city in the Southwest is growing. You can't stop growth, but it can put at risk what we like best about Austin. The paradox, for us, is how do you grow and still preserve what makes Austin special?"

“The paradox, for us, is how do you grow and still preserve what makes Austin special?”

The mayor said it's unrealistic to expect the growth to simply stop. "There's only one way to make that happen – we'd have to make Austin an undesirable place for people to live." He rejected the notion that city economic incentives or Chamber of Com­merce marketing is bringing new residents. "That's not what's making Austin grow," he insisted, and pointed out that the current Council has agreed to only a single incentive deal (a 10-year, $856,000 agreement with Merck for its IT Hub, generating 600 jobs and an estimated direct benefit to the city of $1.95 million).

"Austin is beautiful – there are the lakes, Barton Springs … and people like our quality of life, and even support the city government's policy positions. People want to live here," he continued. "Our challenge is to manage or plan that growth, and still preserve what we are. Pretending that we're not going to grow is not a good option."

Looking forward to the campaign and perhaps beyond, Adler said that in addition to focusing on Austin's major challenges – affordability and mobility – he's aware of having to "defend the city and our values" against pressure from the state and now the federal government, on such issues as immigration, property taxes, and even cultural matters (e.g., the "bathroom bill"). He said that in 2014 he had not anticipated having to do as much non-local work – at the Cap­it­ol, in D.C., even abroad (on climate change) – "but we have to defend the city, and to do that we have to form alliances statewide, nationally, and even internationally."

Nevertheless, he reiterated, his primary focus remains on the city's two major challenges: affordability (especially in housing) and mobility. "We've dug ourselves into a hole on both of those," he said, and, mixing his metaphors, "We're not going to turn the ship around on those right away. We have to act deliberately, and for the long term."

As he had Sunday, Adler said he and his wife, Diane Land, had decided to take on another campaign because they remain eager to continue the work. He said he hadn't realized quite how demanding the job would be – "I expected to have more time to relax, or just walk along the lake" – but said he and Land had decided that within the limited period of the job (whether four or eight years), it is "worth the effort." He said that despite rumors he might have wanted to move to the Legis­lat­ure or even a Washington job (had Hillary Clinton been elected), "I never encouraged those conversations. This is the job I want to do; this is where you get the opportunity to actually get things done."

In the early going, Adler's sole challenger (thus far), former Council Member Laura Mor­rison, has criticized the mayor and Coun­cil for insufficient transparency, and "backroom" deal-making, citing Adler's attempt to negotiate a compromise with the ride-hailing companies (Uber and Lyft) and the recent private/public search for a city manager. The mayor responded that this Council has been "extraordinarily transparent," and insisted that the ride-hailing negotiations (which failed) had been publicly posted to Council in detail.

"The city manager search was awkward at best," Adler said, but defended Council's decision to accept the advice of the search firm for confidentiality: "The choreography of the search was poor, but the intent was to get the best possible candidates, and we did lose some candidates who did not want their names to be public too early."

One central campaign issue is likely to be CodeNEXT, the ongoing revision of the land development code. Adler describes it as absolutely necessary, "but it's a process, not a product," and he believes the collaborative public, staff, and consultant effort will eventually deliver to Council a better code. "If it's not better than what we have now, we're not going to approve it," he said. "I believe in the people of this city, and I believe most people remain willing to engage in this process."

Adler summarized his perspective: "This city has really significant challenges, but we can't lose sight of our advantages. We have one of the best economies in the country, and a really high quality of life, overall. … A lot of things are going really, really well.

"Austin is a magical place, a special place," he repeated. "I believe in the people that live here, that we will make the right choices to preserve what's special about Aus­tin, while managing growth."

See more of our conversation with Steve Adler at austinchronicle.com/daily/news.

A version of this article appeared in print on January 19, 2018 with the headline: Steve Adler on Austin