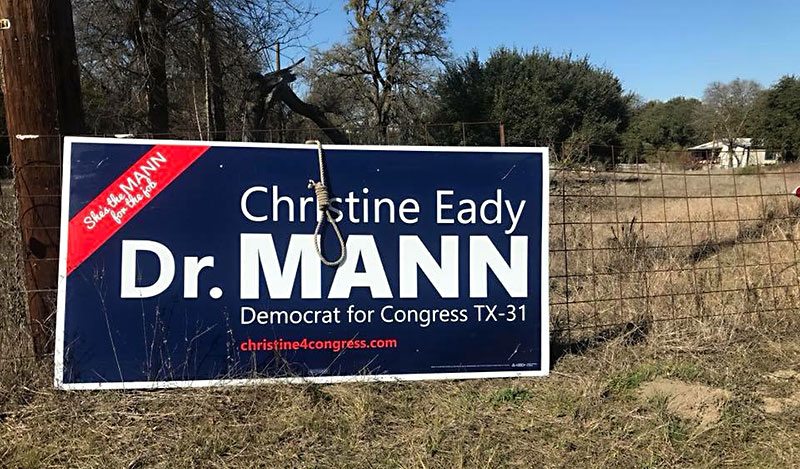 On the way to a meeting last Friday, Dr. Christine Eady Mann's husband called to tell her there's a problem: Someone had draped a noose on her campaign sign in Leander. The Democratic candidate, vying to unseat U.S. Rep. John Carter in CD 31, was stunned. "I really didn't want to believe it," she said later. "At first I went the denial route and thought maybe someone misunderstood what happened. When it finally sunk in, I was horrified. It was hard to compute that someone would do something like this."

The Williamson County Sheriff's Office is investigating this as a racist hate crime and has provided increased patrol around the area. The sign stands outside the home of Jena Recer and wife, Karen, who have faced anti-LGBTQ taunting and vandalism, including eggs thrown at their house. Mann, who's white, says she has "no idea" who to suspect as the culprit but points to possible motives. "My campaign manager is African-American," she said. "I also think people feel threatened that a woman is running, and that marginalized people are making our voices heard." Mann is a physician and political activist who was inspired to run her first campaign after Trump's election. She's made criminal justice reform and voting rights for minorities part of her platform.

Mann shortly thereafter fell victim to a similarly charged threat on her Facebook page, where she'd posted a picture of the sign and noose. A commenter identified as "John Clark" wrote: "The only problem I see with this is she's not at the end of it," accused her of "using black people to further her communist liberal hate," and suggested that "there's nothing a little rope won't fix." Mann reported the comments to the FBI and WCSO. She says Confederate flags often wave from cars and homes around Leander, and noted that elsewhere in the district, which stretches from North Austin to Temple, Ku Klux Klan fliers were passed around a Bell County neighborhood, where a black county commissioner candidate had been campaigning.

While Mann is taking extra precautions and working with law enforcement as needed, "this hasn't scared me at all. I'm not going to back down," she said. "We have to say we're not going to tolerate this hate in our community. It's not going to intimidate us. We need to stand up for the values we believe in." 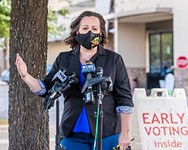 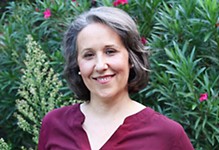