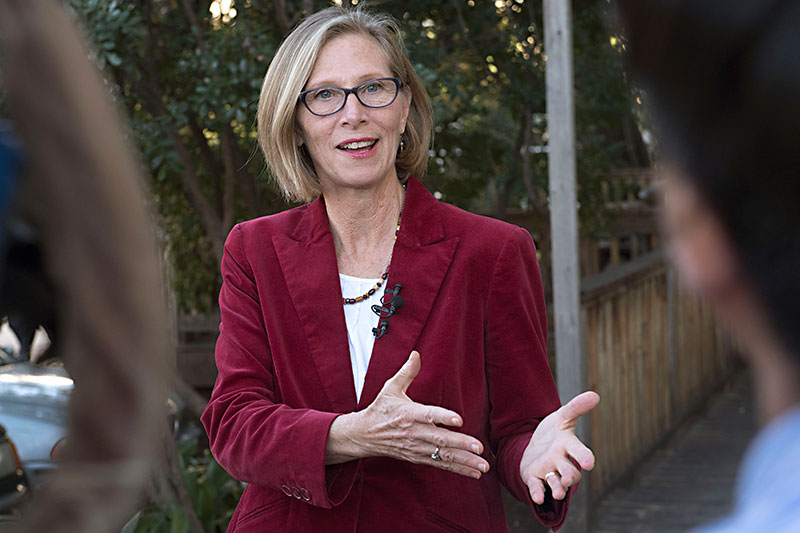 On Monday, former City Council Member Laura Morrison made official what has long been speculated – she filed the paperwork initiating her November challenge to incumbent Mayor Steve Adler. A court ruling overturning the city's fundraising limitations (formerly six months) has expanded the campaign window. Adler's official kickoff is this Sunday, and Morrison says she'll be holding hers in February.

After filing her appointment of a campaign treasurer (BookPeople CEO Steve Ber­cu), Morrison spent Monday afternoon talking to reporters at the bookstore and its coffee shop. In her initial press release, she said she was running to "reset that path that Austin is on, so that our future enhances the quality of life for the people who live here, rather than diminishes it."

Our conversation began informally with her specific campaign prospects – "I've done my own research, and I wouldn't run if I thought it was not doable" – and then moved across a wide range of city issues: the (baleful, in her judgment) prospect of an Amazon headquarters; the current state of CodeNEXT; what else might be done to increase affordable housing; addressing traffic congestion; reducing economic and racial inequality; and more. Serving from 2008 through 2014 (and the advent of a districted Council), Morrison has the advantage of having been there before – and the disadvantage, since spending time as a public official inevitably means making decisions that please some, but displease others.

The thread running through Morrison’s conversation is that she believes the city’s public processes are breaking down in preference for backroom negotiations with insufficient public input.

In recent months, Morrison has been most associated with her opposition to the current state of CodeNEXT, the ongoing land development code revision currently scheduled to reach Council this spring. She believes the process has gone off the rails – that instead of distinguishing between "areas of stability versus areas of change," the drafts are reflecting "massive upzoning" of the whole central city, and abandoning policies intended to support affordability (e.g., requiring affordable units in exchange for building entitlements). She says CodeNEXT is certainly "one of the issues that I needed to be a part of, in trying to make a change." She also mentions the decision to include Butler Park among the parcels of land under consideration for a potential professional soccer stadium: "Whether it happens or not," she said, "we shouldn't be considering handing parkland over to private developers."

The broader thread running through Morri­son's conversation is that she believes the city's public processes are breaking down in preference for backroom negotiations with insufficient public input. Before CodeNEXT, her most recent public activism was in the 2016 fight to preserve city ride-hailing regulations against the demands of corporate giants Uber and Lyft, when she opposed the tentative deal worked out between Mayor Adler and the two companies. "There were two issues when that fight began," she said. "Public safety, and defending city regulations. By the time of the referendum [to overturn the regulations], there was a third – the millions spent by Uber and Lyft to push the petition and the vote."

She believes "secretive backroom processes don't work in Austin," pointing to the recent debacle of the "confidential" recruitment search for a new city manager. While she was reluctant to criticize Adler or the 10-1 Council members by name – a reticence likely to soften in coming months – she said her own "leadership style" differs from the mayor's, specifically in what she called her emphasis on "transparency, inclusiveness, and collaboration."

She also described the 2012 Council's decision that initiated CodeNEXT – adoption of the Imagine Austin comprehensive plan, and a $2 million budget to rewrite the code accordingly – as a holistic project to make the code match the plan.

"Instead it went into a black box," she said, "and is costing $8 million to date." She also criticized an overemphasis on "residential density" at the expense of "all the priorities of Imagine Austin," among them "green infrastructure, public health, affordable housing ... all the critical priorities."

Morrison said that recent Council practice reflects an abdication of responsible oversight, citing the recent rejection of the Austin Police Association contract. "It shouldn't have gotten in a situation of an 11th-hour rejection," she said. "Council was kept apprised of the negotiations [in executive session], and should have intervened earlier to set priorities."

Asked if she thought her explicit emphasis on policies aimed at improving the quality of life for "the people who live here now" implies a favoritism toward long-term residents over newcomers, or even a generational divide, Morrison said: "The concern is across all ages, and is not generationally based. We need to work on solutions that address all situations and ages."

In response to Morrison's announcement, Adler issued a brief statement: "Austin is a special place that I love, and I am honored to be Mayor. Our city has many challenges, and I look forward to getting back on the campaign trail and continuing to fight for Aus­tin." Considering her chances against a popular incumbent, Morrison said, "This is not a popularity contest, but I have ties to people all across the city, and I have lots of faith and trust in informed voters. There is lot of anxiety across the city about what the future holds, and I will make addressing that concern a priority."

See more of our conversation with Laura Morrison at austinchronicle.com/daily/news.

Where Have We Heard That Before?
Perennial notes in city politics ...