Meet-and-confer breakdown brings new money into the city budget. But how much? 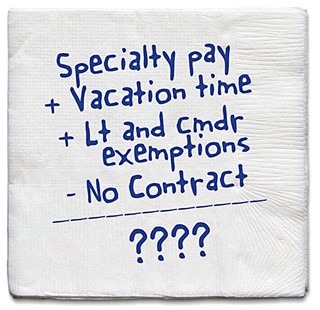 Any consideration of where this money goes hinges on the idea that Council would even have the appetite to make changes.

When the city's meet-and-confer agreement with the Austin Police Association expired over New Year's weekend, it opened a can of worms the city had kept shut for two decades. While the base and coveted step pay provisions officers have enjoyed during that time are currently baked into state law, there were a slew of special pay items, which reward officers for certain positions or skills, embedded into the old contract that now hang in labor limbo. City Council will decide in the coming weeks whether to keep many of those in place.

The activist coalition pushing for contract reform would like the city to hit the brakes on any such action. In a memo sent to Council and the mayor on Jan. 3, Grass­roots Leadership's Chris Harris suggested that organizational math points to "millions of dollars allocated under the old contract" that are now fair game for Council's reallocation into other programs that could address public safety: "from improvements in forensics, to neighborhood lighting, permanent supportive housing for the homeless, drug & mental health treatment, youth programs, parks, pools and other human services." Harris puts forward a $10.5 million estimate for special pay items, based on Council's budget questions and a Dec. 21 memo from interim City Manager Elaine Hart. "I think even [during the budget process] there was some notion on the part of the Council that with all the public safety contracts that things might not go as planned," Harris relayed when we spoke on the phone last week. "There were some questions raised about what would happen in the instance that there wasn't a contract and contracts weren't renewed, things like that."

Hart acknowledged in her memo that the city is currently at the mercy of state law when it comes to offering special pay provisions, and notes that Council will have to act to keep special items like field training officer pay, assignment pay, education/certification pay, and shift differential for working overnight. Beyond that, while Harris' memo targets $1.3 million in longevity pay, Hart's says that the item is allowed under state law and will continue.

APA President Ken Casaday acknowledged that Council has the discretion to reallocate what he called "any cost savings," but he also expressed doubt that more than $10 million could get freed up as a result of the contract's breakdown. "I think it's going to be very hard to pin down the true number," he said. "There's so many cogs." He referred to another part of Hart's memo, where she notes that the city can expect to see a "significant increase" in overtime costs due to commanders and lieutenants losing their exempt status under civil service law, which would come out of the budget elsewhere. Harris notes in his own footnote that the estimates rely on multiple assumptions.

Any consideration of where this money goes hinges on the idea that Council would even have the appetite to make changes. Members have been scarce since the break, but Jimmy Flannigan did tell me that his intention was never to reduce police salaries, but rather to make sure they were growing at a sustainable rate over time – and he believes his colleagues would agree. "There's kind of the broader, short-term versus long-term, how do we navigate this process to ensure that the Council and the union are having productive conversations that lead to a positive outcome," he said. "It's hard to have those conversations over Christmas break, which was my biggest frustration about the union's decision to suspend negotiations."

As for Grassroots Leadership and other coalition members, their work is far from over. Harris defined his memo as "just the beginning of some renewed efforts on our part to put some alternatives in front of the Council as far as how to move forward in this new world we find ourselves in," and hinted at possible action this week that could involve the groups laying out new suggestions for transparency and accountability measures.

"We want to move quickly to replace what's been lost, and not just replace it but put something in place that we feel will be even stronger."