The Epic of Dawnna Dukes

And what a year it’s been 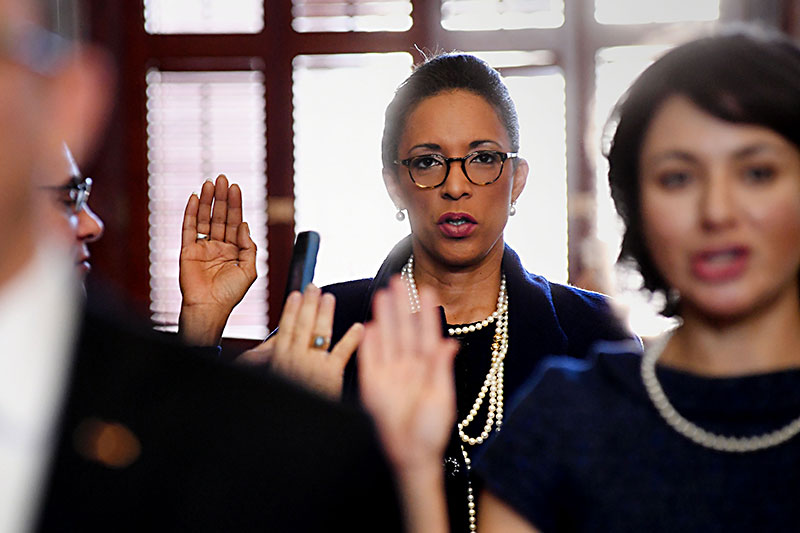 As the old song goes, how can we miss you if you won't go away? Rep. Dawnna Dukes, D-Pflugerville, announced in late 2016 that she was going to step down from the Texas House for health reasons stemming from a 2013 car crash. Her decision, she made clear, had nothing to do with the ongoing investigation by the Texas Rangers and State Auditor's Office into claims she had abused her office, and had legislative staff running personal errands for her. So jaws dropped when she turned up on the first day of the 2017 session and never did resign.

Of course, opening day was one of the few times Dukes did show up at the Capitol. Trav­is County District Attorney Margaret Moore filed 15 charges against her a few days later: 13 counts of tampering with a governmental record, and two alleging abuse of official capacity. Thus began a bizarre summer of legal shenanigans, with rejected plea deals and multiple attempts by Dukes' own lawyers to dump their client. Eventually, Moore was forced to end the prosecution when it turned out that the relevant laws and their interpretation by House administrators were vague and possibly contradictory. Dukes walked away with only a small fine and an agreement to repay some staff salaries to the state. Then she alienated herself from fellow Dems by accusing fellow Travis County state Reps. Donna Howard and Celia Israel of conspiring against her with the Statesman. She filed as a candidate to keep her seat on Monday, Dec. 11, the final day of primary filing.

Heading into the March primary, the big question is whether Dukes can shake off the damage. It's not like the end of the criminal prosecutions has made her political future any safer. Immigration attorney Chito Vela and former Austin Mayor Pro Tem Sheryl Cole had both announced that they would run to replace Dukes in the special election that would have happened had she quit when she said she would – now both have filed to run against her in March, as have Manor ISD Trustee Ana Cortez, lobbyist Casey McKinney, and political newcomer Warren Baker. Already Dukes has endured endorsements for Cole from U.S. Rep. Lloyd Doggett and NAACP chair Nelson Linder, while Vela recently won the vital support of AFSCME Local 1624 – the first big step toward picking up the backing of the influential Central Labor Council. Both Cole and Vela have said Dukes' charges were not the issue: It was her increasingly poor attendance record at the Capitol, and threadbare legislative agenda. But when voters hit the polls in March, many Democratic activists fear ingrained loyalty to the Dukes brand will see her over the finish line one more time.