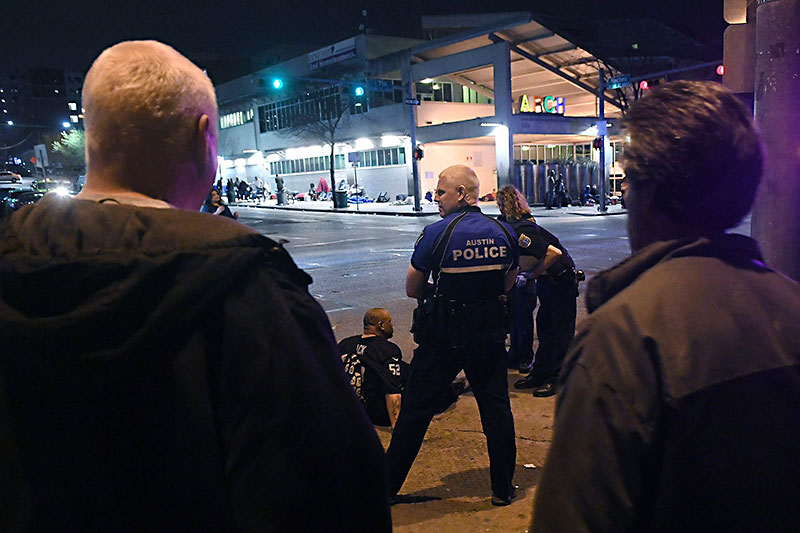 Onlookers watch as police make an arrest Downtown outside of the ARCH. (Photo by John Anderson)

Early this year, an epidemic of bad reactions to the synthetic cannabinoid K2 brought chaos to the city's Downtown community. Austin-Travis County EMS and the Austin Police Department nearly buckled under the stress of answering dozens of calls a day – highly concentrated in an area, they soon found, where dealers were dumping their relatively inexpensive product onto the vulnerable individuals living homeless near the ARCH and Salvation Army. Symptoms from the substance, which is inaccurately marketed as synthetic marijuana, can include vomiting, seizures, and delusions. K2 has been banned since 2012, and the state fixed a legislative hurdle to investigating samples of it in 2015, but it persists due to its price point and the fact that it doesn't show up on drug tests. Its effects hit the Red River Cultural Dis­trict particularly hard. "Playback" columnist Kevin Curtin shined light on the problem beginning in February, as venue owners pleaded for the city to fix the unsanitary conditions in the district and do more about its persistent problems.

Unable to live with the status quo, the city's public safety entities went to work, beginning a year of police stings, marathon arrests, and public outreach. APD instituted temporary extended patrol hours at the ARCH, which helped the department arrest more dealers. APD arrested 19 individuals in May, another two dozen in October, and in November executed a mammoth bust that confiscated more than $1 million worth of the substance. APD Assistant Chief Justin Newsom spoke to a crowd at the ARCH, telling them the risks their dealers wouldn't reveal.

EMS had its own hands full installing a real-time tracker of incidents and instituting a code word for the calls across the department so medics could more quickly identify spikes in use. Previously, exhausted medics were going from call to call, sometimes encountering people they'd dropped off at the hospital with overdose symptoms just hours beforehand, with little or no data to work with. Officials have reported progress on Red River in recent months, though they're also quick to point out that it's a cyclical issue that could, and likely will, strike again.

One Night on Red River
Will Austin's live music row live to tell?