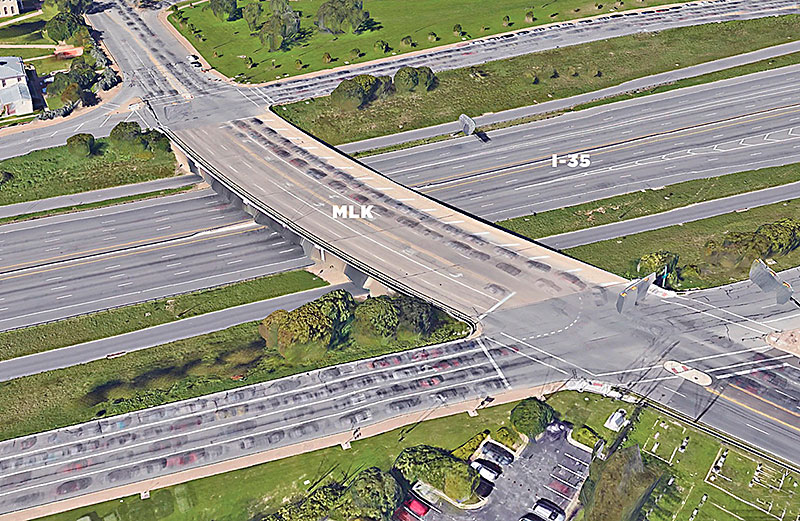 Since upgrades were put in place during the last year, the intersection of I-35 and MLK has shown a 61% crash reduction compared to the year before. (image via Google Earth)

Out of last year's $720 million Mobility Bond, the city set aside $15 million to address a list of about a dozen high-crash intersections. And there's some early good news, according to the Austin Trans­port­a­tion Department: Preliminary data shows drastic decreases in the number of accidents at the four major intersections already outfitted with shiny new safety controls like turn islands, upgraded crosswalks, medians, and pedestrian hybrid beacons. Though the data is still limited, the numbers show Austin making progress toward its goal of eliminating traffic deaths.

Crews have already tackled I-35 and Martin Luther King Jr. Boulevard; Highway 183 and Cameron Road; Lamar Boulevard between Rutland Drive and Rundberg Lane; and Lamar Boulevard and Parmer Lane. Transportation Department staff "annualized" the numbers and found some striking numbers. The MLK intersection shows the most drastic decrease in the year-to-date numbers, with 61% fewer crashes compared to the year before. Crashes at 183 and Cameron decreased by 57%. At Lamar and Parmer, crashes dropped 43%. Lamar between Rutland and Rundberg experienced the most limited results at 22%.

“It’s pretty exciting to see in the data that there are less actual people in Austin dealing with traffic crashes, at least at those intersections.”

Jay Blazek Crossley, who is working to establish a transportation and urban planning think tank, Farm and City, said the results are a great return on the city's investment. "Is there any public health intervention that people do that has such rates of success with relatively so little money?" he said. "It's pretty exciting to see in the data that there are less actual people in Austin dealing with traffic crashes, at least at those intersections." He said the goal now is to see if the same results can be applied to other dangerous areas in the city.

And boy, are there more areas to tackle. City staff recently released a draft of its 2018 Local Mobility Annual Plan, which is a yearly report chronicling the use of the $137 million chunk of bond money aimed at these safety improvements. According to the draft, staff can hope to complete a maximum of 18 intersection safety projects with the current $15 million in funding. Twenty-eight are identified in its "top crash location" priority list. The $15 million allocated for intersection safety and Vision Zero – the city's road map for getting to zero traffic fatalities – is just part of that $137 million chunk that also provides for sidewalks, safe routes to school, urban trails, and other safety projects. In the report, which is in its review and comment phase until Jan. 14, staff explains that some projects will overlap in order to spend the money in the most effective way possible.

Traffic: Why We Drive the Way We Do (and What It Says About Us)
Understanding the sociological mechanics behind traffic problems and why they exist everywhere