After flood of allegations, House and Senate pressed to revise rules 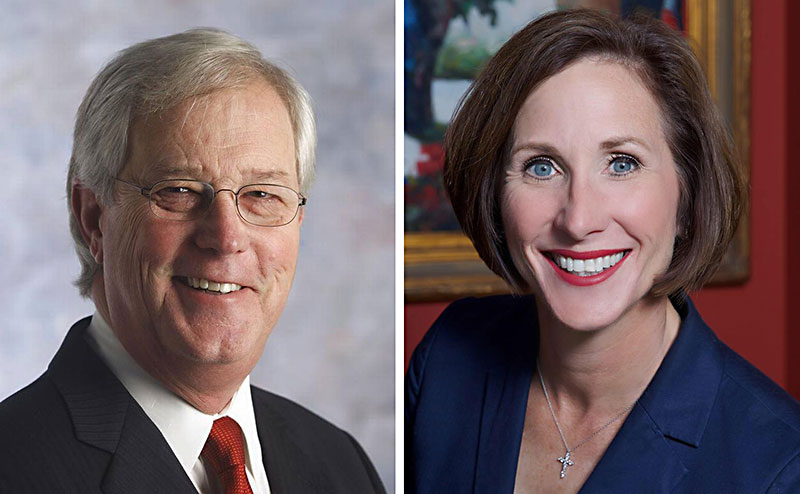 Genevieve Cato felt excited about her new professional chapter when she started her first job in politics as a state House legislative aide in 2013. However, she soon became the target of unwanted harassment from an upper-level staffer, who made a habit of staring directly at her chest during every Capitol meeting. "I felt shocked, vulnerable, and uncomfortable," Cato remembered. "It got to the point where I made excuses to go to another part of the Capitol to cry because I was so upset by this. I really didn't know what to do or who to go to." Cato was terrified at the prospect of confronting her boss and too intimidated to confide in the legislator she had just begun to work for, so she remained silent. "I was young and scared."

Cato is far from alone in her experience. And Texas politicians and staffers have been far from immune from the deluge of allegations that have recently swept the nation and unseated powerful and predatory men from positions in Hollywood, media, and Capitol Hill. Several women have recounted instances of inappropriate and unwanted behavior by male lawmakers, including forcible kissing, groping, and degrading comments in the House and Senate, as reported recently by the Daily Beast and Texas Tribune. Sen. Borris Miles, D-Houston, and Sen. Carlos Uresti, D-San Antonio, are among those specifically identified as alleged abusers in this state; both men have denied the allegations.

“If you had told me a year ago that Texas officials would be talking about sexual harassment policies at the Capitol I would have never in a million years believed you.” – Genevieve Cato

Despite what appears to be a pattern of regular and pervasive behavior at the state Capitol, not one formal complaint of sexual harassment has been filed in either chamber since 2011. The reason rests partly in an outdated and ineffective complaint process that relies on public officials with little authority and few incentives to enforce them. After all, lawmakers are in a uniquely autonomous position, accountable to voters in lieu of supervisors. And as often is the case, fear of retaliation has prevented many victims from coming forward. The onslaught of women-led revelations has prompted the Texas House – a chamber that has continually passed laws infringing on women's bodily rights – to revise its harassment policy earlier this month.

"If you had told me a year ago that Texas officials would be talking about sexual harassment policies at the Capitol I would have never in a million years believed you," said Cato, who now works for NARAL Pro-Choice Texas. "I'm encouraged by this step and am glad they are taking it seriously now. But part of me finds it hard to believe that lawmakers didn't know this has been happening for years – it's the worst kept secret at the Capitol."

The House Administration Committee, which is led by Rep. Charlie Geren, R-Ft. Worth, approved new rules that clearly define sexual harassment – including sexual jokes, gifts, and "intentionally brushing up against a person" – and offer ways for victims to seek recourse through a complaint process. Complaints about staffers can be sent to Geren or the House personnel department; complaints about members can be sent to Geren or committee vice chair Gary VanDeaver. All complaints will be "investigated by impartial individuals." If necessary, external resources (such as an outside attorney or investigator) can be used to ensure impartiality. Identities of victims and witnesses will be protected from disclosure to the "greatest extent allowed by law," the five-page policy reads.

For one former House legislative staffer, clearly defined policies may have encouraged her to come forward. Leaving a sine die celebration at the Continental Club in 2011, she thought a state House member was reaching for her hand to kiss it. Instead, she said, he licked her hand and held onto it, pleading with her and her group of female friends to not leave the party. (Now a Capitol lobbyist, the victim wishes to remain anonymous to protect her job.) "It was totally disgusting and shocking," she said. "I couldn't believe he had the gall to do that as an elected official in a crowded public place." At the time, she wasn't notified of any House harassment policies and never came forward. "I don't know what else could have been done to him other than my former boss chewing him out."

As a 20-year-old Capitol intern during the 2011 session, Taylor Holden similarly wasn't briefed on House harassment policies before beginning work, an option she hopes becomes available to future interns. While touring her around, she says, an aide commented that the Capitol was a "non-stop party" where "everybody fucks everybody" and proceeded to make a sexist remark about a fellow female staffer. Quick­ly disenchanted, Holden quit her internship. She never reported the incident to her boss because she felt that she had "no power" as an intern. "I worshipped the Cap­it­ol and always wanted to work in politics, but after that experience I felt betrayed," said Holden. She now works for a progressive organization in Colorado.

Holden believes women filing complaints would be better served by a third-party, neutral arbiter than legislators. "You don't want the fox guarding the hen house," she said. "Lawmakers who depend on their relationships with other lawmakers to get things done can't oversee the process in a fair way." The third party should also be a constant presence at the Capitol, she suggested, tackling the culture of inequality and misogyny.

Also under the new policy, all House members and staff are required to attend sexual harassment training by the end of January, and every two years afterward. There won't be much enforcement of that, although records of who attended the trainings will be made public, leaving citizens the opportunity to pressure those who fail to take the course.

Rep. Donna Howard, D-Austin, helped craft the rules as a member of the House Admin­istration Committee. "Updated policies were sorely needed so we acted quickly to do some damage control," she said. "What we had before was not something that would have given any victim much confidence to feel comfortable coming forward." While she and fellow local Rep. Gina Hino­josa were the only women on the 11-member committee, Howard says several other female House members voiced concerns on a conference call prior to the hearing, and that those recommendations were included in the final product.

Howard applauded the progress, which includes scrapping erroneous information that listed a now dormant agency as a victim resource but also recognizes significant remaining gray areas such as how best to discipline or sanction violating lawmakers – beholden to voters not bosses – a matter that may take the consideration of the full House. While the Texas Constitution allows each chamber to "punish members for disorderly conduct," and expel a member with a two-thirds vote, that option is not explicitly noted in the updated policies. Hinojosa, who has a background in employment discrimination law, notes that legislators could also face civil liability (under Chapter 21 of the Texas Labor Code) and monetary sanctions for sexual harassment. And both lawmakers say the updated policies deserve an in-depth look over the interim and plan to come up with additional clarification.

Though she hasn't personally been a victim of sexual harassment at the Capitol, Howard has experienced gender discrimination. "I was having to speak up louder to make sure I was heard; I had to insert myself into certain meetings or deliberations to make sure I was included," she said. "There are very few women in leadership positions at the Lege, so I do believe women have been bypassed by less qualified men." Women make up only eight of the 31 Senate seats and just 20% of the House, despite the fact 50% of Texans are women. "I believe the biggest contributing factor to an environment where there's a problem with sexual harassment is not enough women in power," Hinojosa remarked.

Meanwhile, Lt. Gov. Dan Patrick has asked Senate Administration Com­mit­tee Chairwoman Sen. Lois Kolk­horst, R-Bren­­ham, to review the Senate's sexual harassment policies, while Sens. Sylvia Gar­cia, D-Houston, and Kirk Watson, D-Aus­­tin, called on Kolkhorst to hold a public hearing. "The Legislature has clearly failed to create a safe environment for women in the Capitol. That must change," said Watson. Kolkhorst heeded their calls on Dec. 14, letting senators voice concerns in a public forum about the lack of accountability and reporting procedures for how offices handle sexual harassment. But the upper chamber has yet to issue any updated policies.

Cato stresses that as the policies are revised and added to that lawmakers consider input from victims. "It's really important to make sure those who have experienced harassment and abuse are part of the conversation, instead of just those in power."