Can they turn Texas blue? 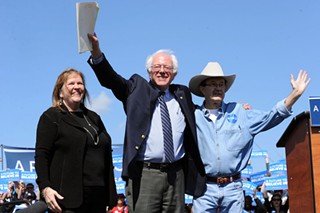 Jane O'Meara Sanders (l), Bernie Sanders, and Jim Hightower at a Bernie Sanders rally at the Circuit of the Americas on February 27, 2016 (by John Anderson)

That's La'Shadion Shemwell, elected in June to the McKin­ney City Council in Collin County. He adds: "Having been arrested, being a minority, having tattoos and dreadlocks, being a poor person with all the odds against me – if I can do it, then anybody can do it."

Shemwell is among candidates and activists featured in the Dec. 18-25 cover story in The Nation, "Building a Blue Texas" by John Nichols. Nichols traveled the state with Jim Hightower, Nina Turner, and other members of Our Revolution (www.ourrevolution.com), the organizational spin-off of the Bernie Sanders presidential campaign. The national board has designated the Lone Star chapter as its first state affiliate, and Nichols reports on its aggressive, optimistic determination to run progressive candidates statewide and in local nonpartisan elections. "I think people know that if we break through in Texas, anything is possible," Our Revolution President Turner tells Nich­ols. "We have to do the work here if we are going to renew the Democratic Party."

Nichols follows the group on an organizing tour of the state, through East Texas and elsewhere, talking to Central Texas activists like Austin Community College trustee Julie Ann Nitsch and congressional candidate Derrick Crowe. Nitsch tells him of the renewed energy coming from young Texans. "There are people who haven't trusted the Democratic Party, but they trust Our Revolution."

As Hightower sees it, the Our Revolution campaign is renewing the commitment once represented by the state party's progressive wing. "There's an energy – you can feel it," he says. And though Nichols' story was written before the Alabama Senate election, the Doug Jones victory there could well be harbinger in Texas ... and across the country.

A version of this article appeared in print on December 22, 2017 with the headline: Texas Revolution?