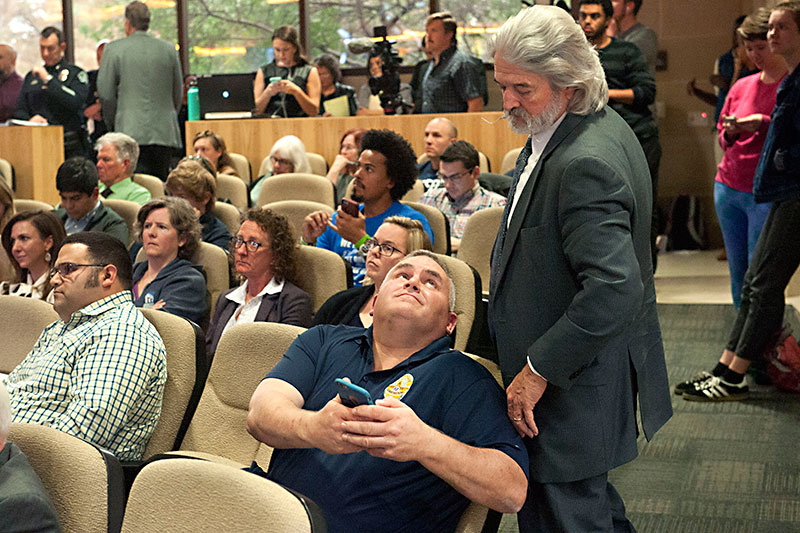 Barring some last-minute Christmas miracle, the city's meet-and-confer agreement with the Austin Police Association is dead. Over the weekend, union membership voted overwhelmingly (1,305 to 110) to reject City Council's overtures for a renegotiation. Even if the two sides reconcile early in 2018, the contract that expires Dec. 29 will be scrapped. And while they could eventually get back to the table to negotiate a new agreement (technically from scratch, though not really), as of Dec. 30 the city will go back to living under the state civil service law that regulates public safety entities – something that hasn't been the case since the late Nineties. Everyone engaged in the process, from APD Chief Brian Manley to the coalition of community activists that pushed for the contract's end, is busy in the lead-up to the holiday break, taking stock of what Texas Local Government Code Chapter 143 means, and how it will affect their interests.

“The men and women of the Austin Police Department are going to show up to work on Dec. 30 with the same heart, same mind, and same commitment to this community’s safety as they did Dec. 29.” – Brian Manley

In a letter to the city manager, APA attorney Ron DeLord wrote that union membership is "disappointed that the mutually beneficial 5-year contract was not ratified," and that it would walk away from an offer for three additional extensions of the current deal. Despite that, DeLord said membership is interested in talking again next year, and requested Council extend step pay and special pay for another year, or until a new agreement can be reached. Union leadership hinted at this possibility in the lead-up to Tuesday: Last week's vote by Council to reject the agreement in its current form flew in the face of history and a strong and united effort by Manley and APA members, who noted the hiring, promotions, and accountability measures the city would lose without the contract. Topping that, Manley told the Public Safety Commission in early December that it could cost $16 million if all of the officers currently eligible for retirement chose to do so in order to max out on expiring allowances like sick pay. On Tuesday, APA President Ken Casaday reported that 20 officers, mostly airport leadership, had retired within the last few days. That's in addition to the usual tally (around 50) who've already retired this year. Casaday predicted more retirements as the countdown to Dec. 29 continues.

Activists note that the number of certified retirements falls far short of earlier estimations that "many" of the nearly 150 officers eligible would take that option. Kathy Mitchell, who helped organize the effort to reform the contract on behalf of the Texas Criminal Justice Coali­tion, suggested that the situation is less dire than union reps would like for city residents to believe. Some of the changes, like eliminating downgraded suspensions and the 48-hour rule that allows officers involved in a critical incident time to review evidence before making a statement, are positive in her view. "The earth is not shaking," she said. "What we have done is we have looked at Chapter 143, and we have seen there are some things that will be better and some things that will be worse for the time being, and there are some opportunities to explore on the horizon."

As for the Citizen Review Panel, which will be dismantled, Mitchell and others have suggested the panel lacks the authority to be effective anyway, and they aren't concerned with its dissolving. The panel ideally functions as a liaison between APD and the community, and has had access to Internal Affairs materials, though it reviews them in executive session, and cannot bring its concerns to the public. Rebecca Webber, one of its longest-serving members, has expressed frustration with the way its recommendations often languish. Activists had suggested giving the body subpoena power to give it more teeth, though DeLord said that's unworkable under state law. The old agreement barred Council from creating any parallel process to the CRP, so there are sure to be ideas thrown around in the next several weeks as to what an alternative process could look like. DeLord welcomed the input, but said, "I think they're going to be surprised at how little legal authority they're going to have." Activists chafe at the notion that they're in the dark about the consequences, maintaining that no oversight is better than the version of it that's been written into the contract.

Manley said on Tuesday that he'll keep working with city legal to figure out how the impasse affects a number of internal processes, including whether he will have to arbitrate if officers receive legal representation in Internal Affairs interviews. He held a neutral tone when discussing the aftermath of the decision, declining to assess the effect it will have on Austin's standing in the public safety sector, and instead reiterating his past support of the proposal. (He also said he took part in the union's weekend vote, but didn't say which way he voted.) "What I am 100 percent confident in is the men and women of the Austin Police Department are going to show up to work on Dec. 30 with the same heart, same mind, and same commitment to this community's safety as they did Dec. 29 and those days prior when we were under the meet-and-confer contract," he said. "That will not change."

The activist coalition that formed to voice concerns around the contract will also work to come up with concrete suggestions for reforms that may be allowed moving forward. If the city and APA decide to go back to the bargaining table, that group will again bring their initial list of reforms – several of which were embedded in the proposed contract – to the conversation, including authority for the Office of the Police Monitor to question officers, and CRP access to IA interviews. "Either way, there's still a lot of work to be done," said Chas Moore of the Austin Justice Coalition. He called Council's vote last week "a huge step" toward creating a more equitable working relationship.

An alliance of council members with intersecting accountability and fiscal interests made this situation a reality when few thought it was possible. Jimmy Flannigan said he's still concerned that the contract didn't allow enough financial flexibility to hire the officers his constituents want. Greg Casar, one of the leading voices on the dais for more police oversight, said he hopes APD and Council can work together to find ways to increase hiring and promotions diversity outside of the contract. Come Jan­uary, Council will have to reckon with special pay provisions like mental health and shift differential, which aren't yet baked into city ordinance but are still allowed under state law. If Council wants officers to keep those incentives, it will have to act. "Council sent a really powerful message that the community deserves transparency and accountability," Casar said. "And that we need to make sure that we both have competitive wages at the police department, but also enough flexibility in our budget to address urgent community needs that also have to do with safety."