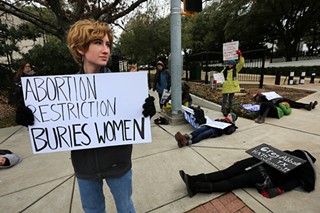 Texas women, the state continues to be obsessed with your fetal remains. Lawmak­ers deeply desire authority over the final fate of the bloody fluid and embryonic tissue that gets expelled after abortions and miscarriages – so much so that they passed a law during the last legislative session, found within omnibus Senate Bill 8, that forces women and health providers to bury (or cremate) those remains, instead of depositing them into a sanitary sewer or landfill, as has safely been done for years.

The Health and Human Services Com­mis­sion held a public hearing on the rule on Dec. 11, at which anti-choice testifiers, echoing the state's argument, claimed the new regulations (incinerating fetal tissue and throwing them into a mass grave) would grant "dignity" to the unborn. Opponents said the law is not only a "cruel" and "medically unnecessary" undue burden, but also infringes on religious freedom. While the Texas Catholic Conference of Bish­ops has offered to finance fetal burials, testifiers noted how the offer doesn't align with every woman's religious or spiritual beliefs. "As a Jewish woman, I would not want my fetal tissue to be incinerated in a mass grave," said Lucy Stein of Progress Texas. "That would violate my religious faith."

Abortion providers say there's also an economic burden, passed down to patients as a result of the possible change; they've identified only one facility in the state willing and able to provide cremation services at a price comparable to current costs. "As we have seen time and time again, anti-abortion politicians will stop at nothing to shame women for their private medical decisions," said Yvonne Gutierrez, executive director of Planned Parenthood Texas Votes. "This mandate is just the latest assault."

Does this all sound familiar? The HHSC passed a similar rule last year, despite a similarly overwhelming majority testifying in opposition. Abortion providers represented sued the state and were successful. In a scathing order issued in January, U.S. Judge Sam Sparks called the rule a "pretext" for restricting abortion access, and blocked its implementation. So, yes, lawmakers this session passed a fetal disposal law – albeit with tweaked language and definitions – even though a GOP-appointed judge had struck down the same thing just months before.

The state had originally requested that the 5th Circuit Court of Appeals nix Sparks' ruling, but they voluntarily dismissed that appeal on Dec. 6, hedging their bet on the rule's second installment, SB 8. Accord­ing to court records, CRR intends to amend their initial complaint and file a motion for preliminary injunction against the new law "promptly after" the new rules are implemented; or if they're not issued before the end of the year, then "promptly in the new year."

HHSC spokesperson Christine Mann said the commission will accept written public comments until Dec. 18. Once approved by the HHSC executive commissioner and posted in the Texas Register, it will take 20 days for the law to take effect. A legal challenge is likely the only way to halt the law. As more than one individual noted on Monday, women last year spoke out against the nearly identical rule in droves, and it fell on deaf ears. As women, they said, "our voices just weren't heard."