Lewis Conway Jr. has yet to officially file as a candidate in next November's election for City Council District 1, but this week the city began running preliminary research into whether he can indeed challenge incumbent Ora Houston. Conway, as noted last week ("There's Never Been a City Council Candidate ...," Dec. 8), is a convicted felon; sentenced to 20 years in the early Nineties for voluntary manslaughter. And while both he and his attorney Ricco Garcia were confident that he can run, since he's had his voting rights restored post-conviction, the city wasn't so sure. In fact, an inquiry to the city's media office yielded little more than a "we don't know yet"; the possibility had never been considered.

City Clerk Jannette Goodall started sorting through the issue at some point over the past news cycle, and on Tuesday issued a memo to City Council and Mayor Steve Adler to say that her office has held discussions with both the city's Law Department and the Texas Secretary of State's Office. Though it's no official ruling (and city Media Relations Manager David Green stressed that there cannot be an official ruling until Conway files), the initial prognosis is looking grim from the city's end. Goodall reports that "the requirements under Texas law for discharging disabilities associated with being a convicted felon differ for voting and candidacy," and that Section 141.001(a)(4) of state Election Code mandates that anybody running for public office "must have not been finally convicted of a felony from which the person has not been pardoned or otherwise released from the resulting disabilities."

She continues: "This means there is no automatic restoration of the right to be a candidate, as there is for voting purposes, after a full discharge of one's sentence. Absent a pardon, the candidate must have obtained a judicial release from his disabilities in order to run" for City Council.

Reached by phone on Tuesday, Conway said he and several attorneys have been working on a two-pronged workaround for the anticipated stipulation: first, by applying for a pardon from Gov. Greg Abbott (not likely), and second, by seeking clemency from a judge to serve on a jury, which he believes would constitute a justifiable release from a resulting disability of his conviction. (He said there remains some confusion over the definition of a disability, since there is no pertinent judicial ruling, since there's yet to be a convicted felon to run for City Council.) Moreover, Conway sees his effort to obtain candidacy as an extension of the city's Fair Chance Hiring ordinance, which he helped usher through Council last year and prohibits businesses from using criminal background as a condition for making a job offer.

As to whether those efforts can prove successful, no one can know for sure until he files. 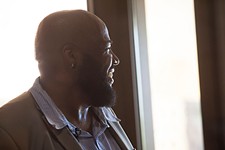