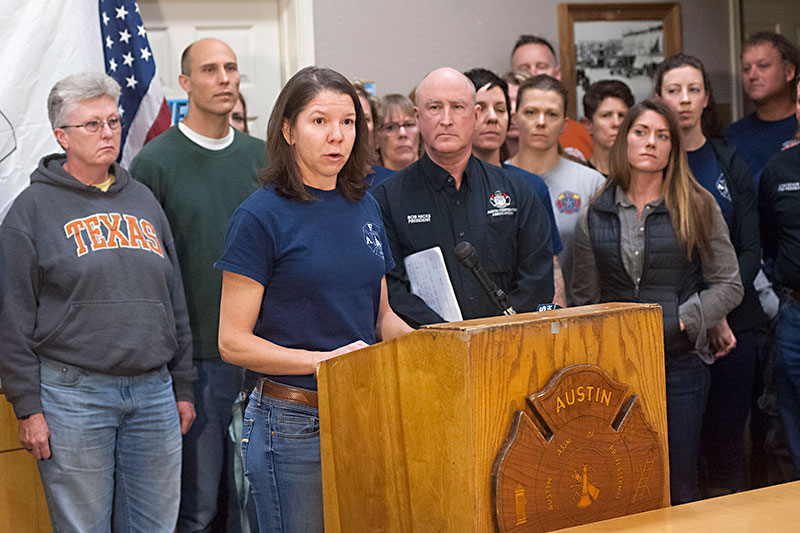 Austin firefighter Erin Dempsey speaks Monday at a union press conference to deride AFD leadership for its failure to investigate allegations that former AFD Lt. James Baker groped multiple female patients under the guise of medical examinations in 2013. Firefighters say a proper investigation could have prevented Baker from filming female colleagues in the shower, as took place in September. Baker has been charged with invasive video recording, a state jail felony. (Photo by John Anderson)

The two final candidates vying to be the next city manager – Spencer Cronk of Minneapolis and Howard Lazarus of Ann Arbor/Austin – met the public Tuesday night, including city staff and other stakeholders, and were re-interviewed by City Council members, who plan to make a final choice by Dec. 19.

Obamacare Enrollment Deadline: Tomorrow, Dec. 15, is the deadline for enrolling in health insurance via the Affordable Care Act. You can get enrollment and information help at www.getenrolledatx.com.

Soccer Stadium Watch: City staff have identified eight city-owned sites that could be in play for a practice facility or stadium for any Major League Soccer team that moves to town. That includes the previously proposed locations at Butler Shores and the Travis County Expo Center. See "Soccer Watch," Dec. 15.

Rhonda G. Patrick was named the founding executive director of the new Austin-Travis County Sobering Center on Monday. The center, located at 1213 Sabine, will open this summer.

PolitiFact Called Out: Austin Reps. Eddie Rodriguez, Celia Israel, and other legislators hit back at Austin American-Statesman reporter W. Gardner Selby for an "antagonistic" PolitiFact article that needlessly "cast doubt" on Democratic gubernatorial candidate Lupe Valdez's Latino migrant worker roots by asking for photographic proof (which she provided). Candidates shouldn't be treated differently just because their stories haven't been heard in Texas politics before, they wrote.

A former Texas judge and religious right figure has been accused of sexually abusing a teenage boy for years. A suit filed against Paul Pres­sler, who served on the 14th Court of Appeals and in the Texas House in the Fifties, alleges he assaulted former Bible student Duane Rollins over the course of several decades. Pressler denies the accusations.

Austin's cemetery rules are getting revamped, and the final draft has been posted on the City Clerk's website for public feedback through Friday, Jan. 12. Visit Public Notices at www.austintexas.gov/department/city-clerk. Email comments to Danne.Williams@austintexas.gov.

Death Watch: Texas executed seven men in 2017, its fewest (along with last year) since 1996. The state also stayed seven executions.