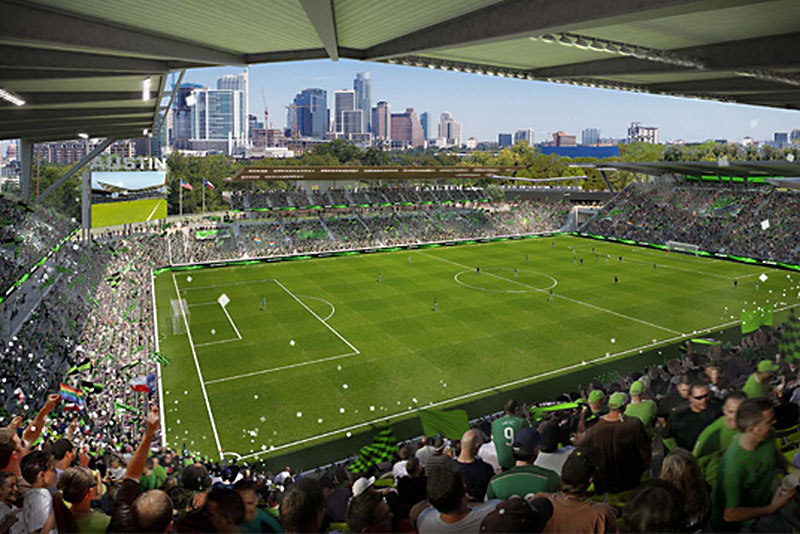 Picture this (without the green kits, maybe): a soccer stadium on Butler Shores. Precourt Sports Ventures – the entity that owns the Columbus Crew SC, currently considering a move from Columbus, Ohio, to Austin – has identified the south shore park just west of Lamar as its ideal spot for a new $200 million soccer stadium. Opposition abounds, however, and already proposals are being drawn up for a lavish complex in East Austin. See "A Tale of Two Soccer Stadiums," Dec. 8, for more.

City Council has a full plate for the next two weeks (final meetings of the year) with today's session (Dec. 7) teeming with contracts, zoning cases, and perhaps revelation of the finalist candidates for city manager. And next week will likely feature an extra Wednesday meeting to spread the work, and the public testimony concerning the proposed Austin Police Association contract. "Council: They Bring Their Ukes Along," Dec. 8.

Dr. Dana Kadavy, who served as the director of Biological Sciences at local private lab Signature Science for 14 years, has taken a new position with the Austin Police Department, and will now oversee the department's still-operating forensic labs in an ongoing effort to restore public confidence after the DNA lab shuttered last June.

Chito Vela officially filed as a candidate for state House District 46 on Tuesday, and simultaneously resigned from the city's Planning Commission in the process. Council Member Greg Casar, who appointed Vela to the commission, has tapped Conor Kenny to replace him. Kenny until recently served on the Design Commission, and Casar has yet to appoint his replacement. That spot will remain vacant until the council member does.

Valdez for Guv? Dallas County Sheriff Lupe Valdez officially filed to win the Democratic nomination for Texas Governor on Wednesday, Dec. 6. Valdez will step down from her current role to run after 13 years of service. The 70-year-old is a former migrant worker, U.S. Army captain, and federal agent, and has butted heads with Gov. Greg Abbott over federal immigration detainers.

If It Quacks: Rep. Blake Farenthold, R-Texas, was recently caught using taxpayer money to settle sexual harassment suits. Some $84,000 in Treas­ury Department funds were spent on a 2015 settlement between Farenthold and his accuser, former communications director Lauren Greene. (Farent­hold has since promised to repay taxpayers.) The news comes as less than shocking for many; the rep once made headlines for a viral photo sporting ducky pajamas next to lingerie-clad women.

Rats! The Texas Health and Human Services Commission building is being overrun with vermin. Several hundred sewer rats have infested the Brown Heatly building on North Lamar, forcing the commission to pay $60,000 for exterminators. (Not a good look for health regulators.) It's suspected that the furry intruders have been attracted by ongoing renovations or minor construction activities.

The Transportation Department released its draft Guadalupe Corridor Improve­ment Program engineering report, which emphasizes dedicated transit lanes, and better bicycle and pedestrian protections. The plan is expected to go before City Council for discussion and dissection in the spring. See "Public Notice: The End of Single-Family?," Dec. 8, for more.