Council: They Bring Their Ukes Along

Today at City Council: It’s gonna be a long one 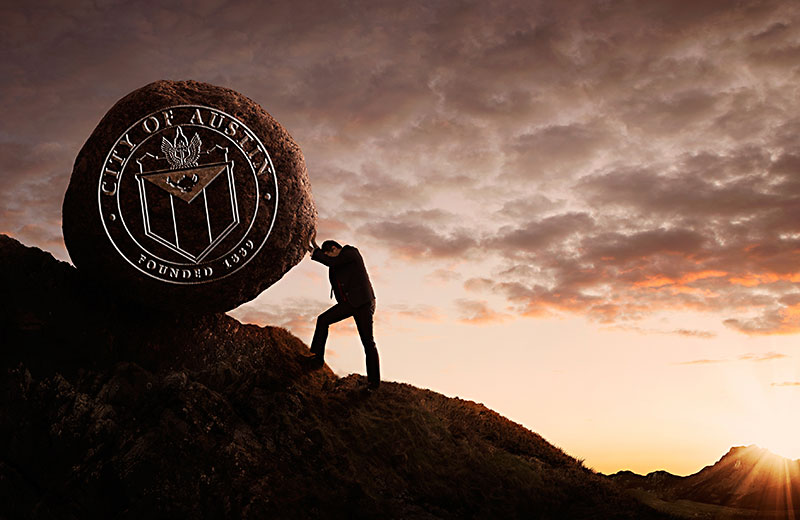 If all goes according to plan – a big If, in this particular territory – the city of Austin will be one step closer to having a new, permanent city manager following today's City Council meeting (Thu., Dec. 7). Two Items (including the morning briefing) address the search, and backstage scuttlebutt suggests the Council will make good on its plan to announce the surviving finalists of the five semifinalists (there were six, but one, former General Services Admin­i­stration chief Denise Turner Roth, has reportedly withdrawn), and perhaps also announce public meetings for that group. ("Meet Your City Manager Semifinalists," Dec. 1). Council members plan to make a final selection before year's end. (For more on the search, see "Point Austin: Double Top Secret Probation," Dec. 8.)

Today's is a hefty agenda (101 Items), although a couple dozen of those are zoning cases concealing both likely postponements and an unknown number of potential land mines. (A couple of council mem­bers, Delia Garza and Ellen Troxclair, are expected to be absent on other business, encouraging postponements.) Nominally on consent are nine 10-year concession contracts proposed by the Aviation Department – seemingly uncontroversial, but substantial enough to draw some discussion.

Council members plan to make a final selection on the next city manager by year’s end.

Not on the zoning agenda – and theoretically on "consent" – is the return of the Champions Tract 3 case, which ran afoul of posting issues (serious enough to have the initial approval voided in court), so it returns here for renewed second and third readings (which might carry over to Dec. 14). Whatever else happens, the Item is likely to be pulled for further discussion – whether neighborhood opposition to the project (or Council's, led by District 10 CM Alison Alter) is sufficient to derail it altogether remains to be seen.

Also returning on consent is the revised Marketing Plan for "Visit Austin" (brand name of the Austin Convention and Visit­ors Bureau), now edited to reflect a $2 million budget cut, and more specifically to eliminate references to the proposed (and embattled) Convention Center expansion. The Visit Austin staff found itself whipsawed in the dais debate over the still-tentative "Downtown Puzzle," following a task force recommendation and Mayor Steve Adler's support for the expansion, facing opposition led by Leslie Pool. While that project remains very much up in the air – it doesn't look like it will return to the dais before next year – the Visit Austin folks will be hoping they can emerge relatively unscathed from today's discussion and thereby continue promoting conventions that the current building can accommodate.

Veteran Council observers will recall the 2012 debates and controversy over the approval of Austin Pets Alive! as stewards of the Town Lake Animal Center. That tenure seems to have settled over time, sufficiently so that today Council will consider a 25-year extension of the arrangement, with options for two additional 25-year periods. Item 33 (on consent, though probably pulled for discussion) would extend APA's contract; Item 99 (subject to a public hearing) would make permanent the Center's use of the parkland on which it currently sits.

• Capitol Recapture: Items 26 and 27 would ratify pending agreements with the Texas Facilities Commission and waive $6.8 million worth of the city's right-of-way vacation fees necessary to move forward on the state's Capitol Complex Master Plan (specifically the Congress Avenue pedestrian mall). In some political fantasy world, Council might hold the project hostage against an end to legislative Austin-bashing and state extortion of AISD funding – but in fact the mall is the aspect of the project most beneficial to the city. Nevertheless, CMs worked it over in detail at Tuesday's work session, and rhetorical annotation may continue this morning.

• Isn't That Really Special? The endlessly simmering special events venue ordinance revisions return for third reading (Item 32), having gone through the grinder sufficiently to satisfy everybody and nobody – with "new issues" reportedly arising in the last few weeks. On Tuesday, staff requested yet another postponement, until April – but CMs pushed back hard, and at least some provisions may arrive today for approval.

• Wasting the Water: As we reported briefly last week ("Headlines," Dec. 1), the misnamed Texas Commission on Environ­mental Quality appears determined to move forward on permitting the City of Dripping Springs to deposit treated effluent into Onion Creek. In Item 29, Council will discuss Austin's ongoing opposition to the permit, in which it is joined by several other parties with interests in clean water.

• Hold Your Fire: Not likely to raise much controversy is a proposal (sponsored by five CMs) to strengthen the city's federal legislative agenda concerning firearms, specifically concerning possession by domestic abusers, and laws governing bump stocks and silencers. One can only wish them Godspeed.

The day's musical honorees are those devotees of Hawaiian and choral magic, the Austin Ukulele Society. We might hear the "Monster Mash," "Love Potion No. 9," "Psycho Killer," or any of a dozen others – a good guess is a holiday medley. Get an early taste at www.austinukulelesociety.com.