The congressman took a few minutes from “Trouble in Toyland” 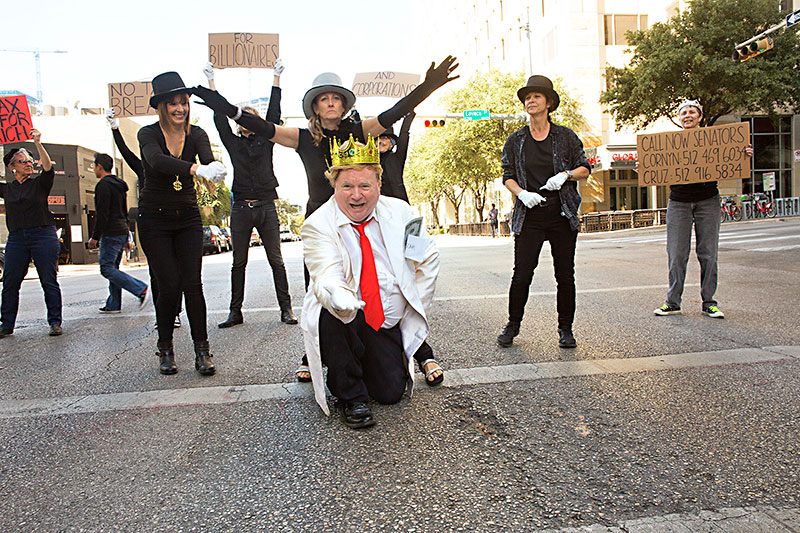 Members of Indivisible Austin blocked traffic at Sixth and Lavaca on Monday to protest the GOP tax plan outside of U.S. Sen. John Cornyn's Downtown office. (Photo by Jana Birchum)

U.S. Rep. Lloyd Doggett was in town last Tuesday for a Texas Public Interest Research Group press conference at Escuelita del Alma, devoted to the TexPIRG's annual "Trouble in Toyland" report on dangerous toys (www.uspirg.org). Afterward, we spoke briefly about recent congressional business, beginning with the September failure of the GOP majority to repeal Obamacare. He emphasized that Austinites should not be discouraged, and need to maintain the pressure on elected officials to do the right thing. "It was a great victory on health care, and reason to have hope, with people speaking out and refusing to take no for an answer, when millions would lose health care coverage," he said. "While the courageous votes by [GOP senators] John McCain and Susan Collins made a difference, that would not have happened without the steady demands of people across the country that the Affordable Care Act be protected."

He said the same should be true of the tax bill. "The impact is likely to be more far-reaching than the repeal of Obamacare," he continued, "and whether we can stop it in the Senate depends on continued public outcry, against legislation to give more to people at the top and multi-national corporations, and to pile on mountains of debt at the expense of middle-class and working folks … and the destruction of the social safety net." Asked if he found it hard to focus on constituent service like the "Trouble in Toyland" effort while the entire structure of representative government appears threatened by the Trump administration, Doggett said, "Occasionally, I'm able to make a small difference for a family here, when I can't change a practice in Wash­ing­ton. … The fact that we kept every [House] Democrat and picked up 13 Republicans against this [tax] bill, is encouraging, and sets the foundation for action in the Senate. I remain hopeful that we'll get enough people saying no, and that we'll be able to stop the bill."

A version of this article appeared in print on December 1, 2017 with the headline: Doggett: Keep the Pressure On