Does Your Boss Pay You to Miss Work?

They may have to soon 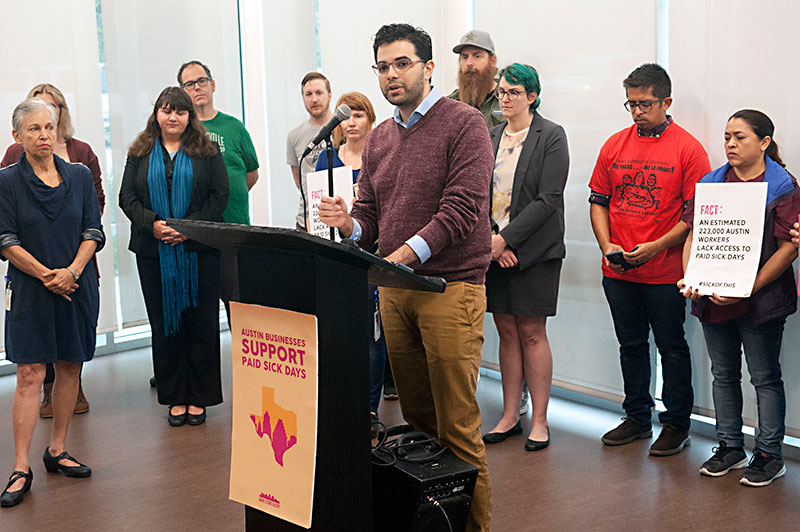 Stakeholder meetings for a citywide sick pay ordinance that would require private employers to compensate their employees for time missed for health reasons began this month, and a united front has already mounted in opposition. The same groups that tried to throw a wrench into 2016's fair chance hiring ordinance have adopted a more engaged approach, proactively challenging the feasibility of another measure that could, in their view, place a significant financial burden on Austin businesses. That's largely the work of the Aus­tin Chamber of Commerce, which last year tried (and failed) to get City Council to postpone its adoption of fair chance hiring, which now requires that local employers make a conditional job offer before running a criminal background check on any applicant. The chamber has since brought on former Council Policy Aide Tina Cannon as Senior Director of Government Relations in an effort to get more involved – and sooner – in discussions at City Hall.

Greg Casar, who shepherded fair chance hiring through Council, also sponsored the resolution (passed Sept. 28) directing staff to hold a series of community input sessions to determine the parameters of a sick day policy for Austin employers. (Staff will present their findings to Council in early December; a draft ordinance is expected for consideration by February.) At the first stakeholder meeting, held Nov. 2, Casar stressed the value of having people from diverse backgrounds sharing their opinions throughout the process. "The ideal is for people to be able to feel comfortable not going to work when they are sick or a loved one is sick, for the betterment of that person's life, the economy, and people's health," he said. "But the question is, how do we best get there? I know there are people here who, when it comes before Council, will be for it; people who might be against it; people who might be for it with particular tweaks. The best thing we can do now is to come together."

An estimated 223,000 Austin workers do not currently have sick days they can use to balance their health and income.

So much for that. In an email sent Nov. 6, Cannon informed chamber members: "This is a time sensitive matter which will impact the way your company handles [paid time off] and sick leave and we need you to take immediate action." That same day, the Austin Technology Council relayed the same message to its members, encouraging them to advocate for a "flexible" workplace. (ATC Chief Executive Officer Barbary Brun­ner later explained that her group and the Chamber shared the same perspective, and that it made sense to repeat the language.) Also on Nov. 6, the Texas Restaurant Association published a video (since taken down*) outlining the dangers of a mandatory sick pay policy – warning that an ordinance could threaten restaurants' low profit margins and jeopardize employees' schedule flexibility. "This [proposed] ordinance has big implications," said the video's host, Sabrina Washington. "It's likely that similar ordinances will pop up across the state over the coming months and years, and we are ready for this fight."

But not every enterprise is fighting the idea from the onset. On Nov. 15, a coalition of small businesses, including Wheats­ville Co-op, Black Star Co-op, and the Purple Fig Cleaning Company, held a press conference at the People's Community Clinic to announce their support. Meaghan Perkins, speaking on behalf of Beetnik Foods, contradicted TRA's claims, saying a sick pay ordinance would be a boon for industry workers and customers alike (as a safeguard against contamination). Work Strong Austin, the alliance of advocacy groups in support of the ordinance, has shared research corroborating Perkins' view, indicating that adoption of a sick pay policy has led to a measurable decrease in infection rates in other cities. Dr. Pritesh Gandhi, who practices at People's, said that the medical community around the country has recognized the importance and necessity of the reform and that it is an issue that overwhelmingly impacts low-income workers. "A recurring theme with our patients, many of whom work in low-wage jobs and support and build the infrastructure of this city, is that often the choice has to be made whether to go to work sick, or stay home and don't get paid," he said. "It's a really difficult choice for our patients."

Philip Flesher supports a policy. He's the president of Exstratus, a cloud cost optimization firm in Austin. Shortly after the press conference at People's, he confided that he thought the Technology Council's opposition was rooted in a reason that wasn't quite logistical. "I think sometimes there's a values question with many business owners who do tend to be more fiscally conservative," he said. "It's a principle thing more than a 'this will actually impact me' thing." Brunner later objected to that assessment, saying that whatever the draft ordinance ends up looking like will impact the administrative side of technology businesses by "taking human resource time away from other employee benefits programs and training programs."

Following the second stakeholder meeting, on Nov. 16, Cannon said she's been disappointed with how they've been run, calling them "less than productive. ... I think the number one question that has to be asked is 'Should this policy exist?' And it has yet to be asked at any of these forums." Critics of the measure point to their own studies on the policies in San Francisco and Con­nec­ticut, which emphasize that the changes in these areas haven't been cost-free.

But it may be too early for Cannon or anyone who agrees with her to ask that question. The resolution seeks community feedback on what a sick pay policy could look like – not whether or not there should be such a policy. That decision will fall on Council and the public beginning next year.

The TRA re-posted its video on Thursday morning, shortly after this story was published.

A version of this article appeared in print on December 1, 2017 with the headline: Say You’re Sick