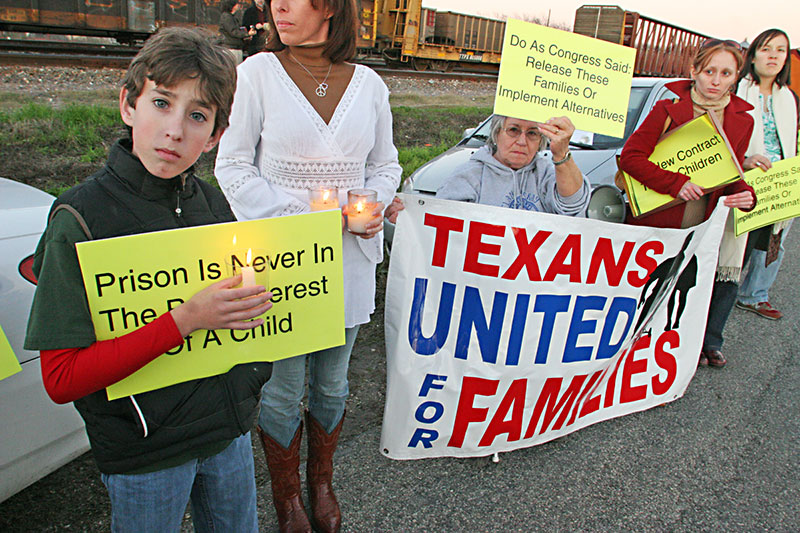 Protesters outside the T. Don Hutto Residential Center in 2007 (Photo by Jana Birchum)

When members of Grassroots Leader­ship met with undocumented detainee Laura Monterrosa on one of their recent routine visits to the T. Don Hutto Resi­den­tial Center in Taylor to monitor human rights abuses, she initially stayed silent about the alleged abuse she was facing. She told me through an interpreter on Tuesday that a pending asylum case, and memories of those in her shoes who faced retaliation for speaking out – in the form of deportation threats or transfers to another facility – kept the 23-year-old detainee from sharing her story.

But then an anonymous caller informed CoreCivic, the private prison company that operates the all-women detention facility, that Monterrosa was being sexually assaulted by a guard. She then broke her silence and confided to Grassroots in early Nov­em­ber, penning a letter that describes a pattern of abuse since June. "She harassed me, telling me threatening words and forcing me to have unwanted relations with her," Monterrosa wrote of the female guard. "She looked for or took advantage of every moment she could to touch my breasts or my legs. … I got tired of all of this and asked her 'no more,' because I was very scared, but she didn't care and I told her that I was going to talk to the captain, but she laughed with a sarcastic laugh and said 'Do you think that he will believe you? Please, they never will.'"

Monterrosa’s is just the latest in a long string of alleged abuses at the for-profit detention center.

When prison officials got the anonymous call, they "threatened her with solitary confinement in medical isolation," a term CoreCivic uses instead of solitary confinement, said Sofia Casini with Grassroots Leadership. (CoreCivic, founded in part by T. Don Hutto himself, has a tendency to employ terms that soften their meaning – including its own name, adopted last year as part of a rebranding effort from the more direct Corrections Corporation of Amer­i­ca.) Casini said she's seen that room before. "It's tiny and very cold at a painful level. It's designed to break the women down."

Eventually, Monterrosa's attorney coordinated an investigation with two Williamson County sheriff's deputies and officials from U.S. Immigration and Customs Enforce­ment, but Casini says ICE's presence felt intimidating: "The ICE side was extremely victim-blaming and questioned her testimony as either lying or consensual to undermine her credibility." Monterrosa provided multiple witnesses, including a former Hutto guard, but the perpetrator remains employed, according to Grassroots. CoreCivic, which operates Hutto for ICE, directed inquiries to the federal immigration agency, but regional spokesperson Nina Pruneda reminded that the agency does not comment on pending investigations. "The agency is committed to ensuring all individuals in our custody are treated in a safe, secure, and humane manner," she added. "Accusations of alleged unlawful conduct are investigated thoroughly and appropriate action is taken to ensure the safety and security of those involved and the others in ICE custody."

Grassroots Leadership is currently calling on Williamson County Sheriff Robert Chody to launch a transparent investigation into the alleged abuses. "Anything less than a full investigation is really concerning," said Casini. WCSO spokesperson Patricia Gutierrez declined to comment on the potential of that investigation.

Meanwhile, Monterrosa says her life is "like a hell right now," and that she's been subjected to tight surveillance, searches, and discrimination. "They aren't treating me the same as others," she said. "I feel extremely controlled. They want to blame me for making the complaint."

Hers is just the latest in a long string of alleged abuses at the for-profit detention center. In 2010, a former prison guard who allegedly groped women in his custody while transporting them to the bus station was arrested, and in 2007 a CCA employee was fired after inappropriate sexual contact with a female detainee. Nationwide, sexual abuse in detention centers is not only underreported but also underinvestigated. Between May 2014 and July 2016, the Department of Homeland Security's Office of Inspector General received 1,016 reports of sexual abuse filed by people in detention – an average of more than one complaint per day – but investigated only 24, according to a study by the Community Initiatives for Visiting Immigrants in Confinement.

"This kind of abuse retraumatizes asylum-seeking immigrant women, most of whom are already fleeing sexual assault, domestic abuse, and gender-motivated violence," said Robert Painter, an immigration attorney at American Gateways. Indeed, Monterrosa said when we spoke that she fled a situation of abuse in her native El Salvador, including being prostituted by family members and giving birth to a daughter as a result of her uncle's rape. "I came here looking for protection and safety in this country. Many of us have come from mistreatment in our countries, and it's not right that we're suffering the same abuses in this detention center."

Painter's group monitors for abuses at Hutto, and has heard claims of sexual assault, lack of medical care, and mistreatment by some CoreCivic employees. "This latest incident highlights the failure of detention centers as an overall strategy in dealing with immigration enforcement. Placing these women in prisonlike conditions makes them vulnerable to this type of abuse." Casini echoes that point, calling the detention system "ripe for these power imbalances. The stakes are so high for these women who are seeking asylum that they often will fear speaking up." Monterrosa indicated that many of the 500 other women at Hutto are being "manipulated psychologically" and are not speaking out about abuse due to fear of deportation.

While advocates pressure the WCSO to launch a full investigation, Monterrosa's alleged abuser reminded her of the power she wields over the detainee. "She began to tell me she liked me, and that whatever she liked belonged to her," she wrote in her letter; "she says that she is good friends with the boss."