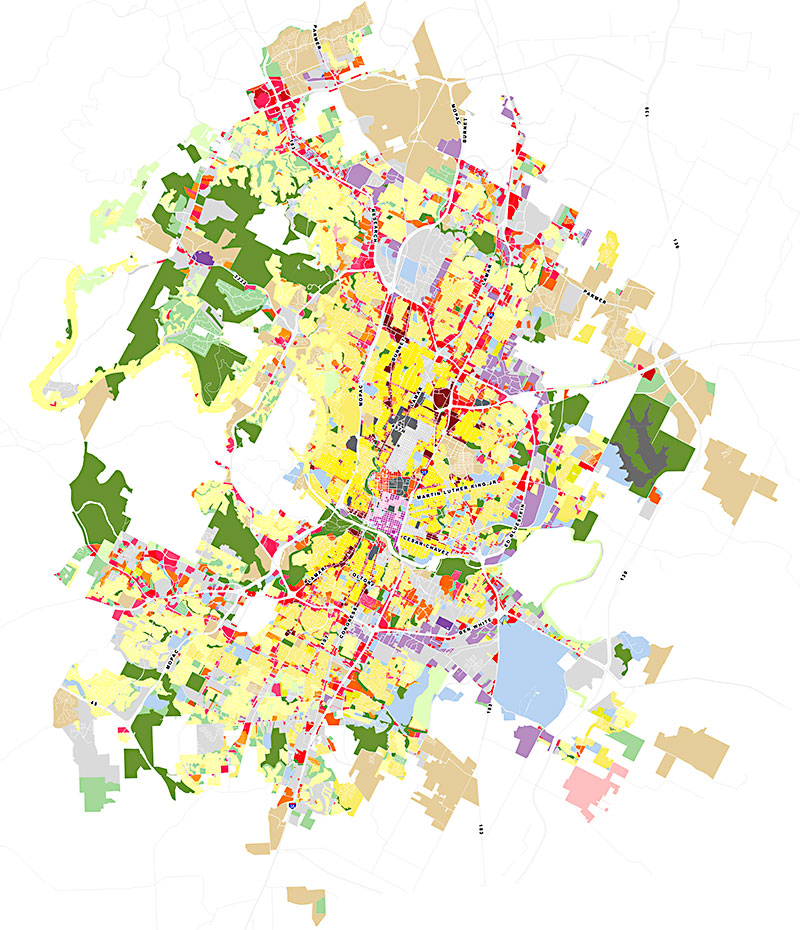 Should all go according to plan, hardly a certainty when it comes to issues of land use here in Austin, city staff will unveil the third and final draft of the proposed land use code rewrite on Tuesday, Nov. 28. But there's mounting buzz this week that CodeNEXT's most up-to-date timeline, announced in September after draft two came out, may get pushed back – significantly, with a third draft not hitting the streets until possibly the next calendar year – to let staff and code consultants get the rewrite right. Yet project lead Greg Guernsey denied that talk during Tuesday's meeting of the city's joint land use commissions. Asked about the swift schedule by Zoning and Platting Chair Jolene Kiolbassa, Guernsey curtly replied, "So, I have one schedule. It's been posted. If anything changes, I'll let you know."

“CodeNEXT is sufficiently important that we should take the time to get it right.” – City Council

And so, for now, we will wait until Guernsey lets us know. [Update: Guernsey let us know on Wednesday night.]

Though staff have spent the past two months touting a release date of late November – at meetings, on printed handouts, and via the CodeNEXT website – a delay in the release doesn't necessarily mean the timeline has been extended. According to City Council Resolution No. 20170622-043, adopted in June, code writers actually have until Jan. 11, 2018, to present the newest and final draft to the Planning and Zoning & Platting commissions tasked with overseeing the rewrite. Mayor Steve Adler's communications director Jason Stanford said on Monday that their office anticipates the latest draft "as early as this month and as late as mid-December."

But the aforementioned resolution underscores the significance of Austin's new land development code, stating: "CodeNEXT is sufficiently important that we should take the time to get it right." This message has been echoed throughout commission meetings, neighborhood forums, and stakeholder groups for months. ZAP went as far as to request a timeline extension in their most recent recommendation. Kiolbassa told the Chronicle afterward that the entire 10-page document serves as evidence that the rewrite needs more time to become an "organized and complete land development code."

Pressed on which areas specifically need additional attention, Kiolbassa cited equity between East and West Austin as a primary concern, as well as that in the city's outer neighborhoods. "We should be turning them into pedestrian-friendly growth centers instead of keeping up the auto-centric pattern, but that's what CodeNEXT does," she said. The chair believes the best option is to continue working on the rewrite without pressing deadlines: "Having deadlines has not worked."

During the Planning Commission's Oct. 24 meeting, Commissioner Nuria Zaragoza also argued for more time to better understand the proposed code and provide "thoughtful and deliberate" recommendations. Her plea to remove dates from Chair Stephen Oliver's schedule was shot down, though Oliver did confide on Monday that he doesn't believe "more time helps people work through tough problems.

"We could work through this for years just for the misery of it," he said. He wants to be "solution oriented" with the rewrite and draft three release, and to implement an organized schedule, which he and Planning commissioners have spent the past couple of weeks crafting in order to plan out their next steps.

In addition to the recommendations of city commissioners, numerous reports were filed in advance of CodeNEXT's Oct. 31 deadline for public feedback on draft two. Few of those suggest that the proposed code is ready to be implemented. Local environmental groups Save Barton Creek Assoc­i­a­tion, Clean Water Action, and Environment Texas submitted a joint letter to staff, noting that draft two moves Austin closer to achieving Imagine Austin's green-city goals, but that there are still "some major gaps." The letter states that increased density could create an increased flood risk if new, missing-middle developments "are not held to the same drainage requirements" as larger-scale projects. The Austin Housing Coalition (nearly two dozen organizations, including LifeWorks, Foundation Com­mun­i­ties, and HousingWorks Austin) submitted recommendations on better achieving the city's affordable housing goals. Chair Nicole Joslin writes that AHC "appreciates the opportunity to provide feedback" but reminds that "the majority of our comments and questions" were not addressed in the code's second draft. "You will find many of them reiterated here." Though AHC commends the expansion of the area in which affordable housing credits are available, they believe more work is still needed. Their recommendations include additional S.M.A.R.T. Housing fee waivers and an expedited review process, additional incentives and less parking requirements for accessory dwelling units, and increased "opportunities for legally-restricted affordability west of MoPac."

Joslin was one of many to sign up for public comment during the joint meeting on Tuesday, Nov. 14. She reiterated AHC's recommendations and provided a smooth segue into the meeting's discussion on affordable housing. Developer and former CodeNEXT Advisory Group member Terry Mitchell gave a presentation documenting the nationwide city housing crisis, noting that across the U.S. and here in Austin, those with median household incomes cannot afford to buy the median home. Mitchell argued that to meet the city's housing needs, Austin must increase density and create smaller and various types of units throughout all 10 council districts. He believes the most beneficial breakdown of these houses would be 70% greenfield development (previously undeveloped sites) and 30% infill. Mapping consultant John Fregonese followed with a brief presentation on his newly adjusted mapping numbers, based on real market value based on real sales prices, updated building prototypes to more accurately reflect CodeNEXT, recalibrated planned unit developments, and adjusted rents based on neighborhood submarkets vs. average rents. The overall calculations came out mostly the same, with the new "equivalency" capacity calculations – trying to map proposed zoning as closely as possible to what we currently have on the ground – totaling 193,085 housing units, as opposed to original draft two calculation of 195,725 and the existing code capacity of 103,955.

Tuesday's joint meeting concluded just before PC's 6pm meeting, where the code's proposed density bonus program continued to be discussed. Consultant Lorelei Jun­tu­nen and Lauren Avioli from the Austin Neighborhood Housing and Community Development Department attempted to answer the five most recurring questions on the code's affordability incentives. Most of that proved repetitive, but one new and welcome piece of information came from NHCD Assistant Director Rebecca Giello, who confirmed that her department is working on a large technology project to better track affordable housing initiatives and code requirements.

Before returning to regular PC scheduling, Oliver said he's already heard from affordable housing advocates who weren't behind the project. "I want to know why and what would it take to get the people who do this on the ground every day to say, 'Great program, good idea.' Because if the main users hate it every time they think about it, I don't want to think about it.

"In the last couple months I've heard more and more squeaky wheels on it, and that worries me. I'm not saying we can't get there, but maybe the solution isn't quite on the table yet."