Health risks and pain for patients

Whole Woman's Health medical director Dr. Bhavik Kumar oversees four Texas abortion clinics, but he spends most of his time working in the Austin location off I-35. Shuttered in 2014 after more than a decade as a result of House Bill 2, the local clinic reopened in May following the U.S. Supreme Court ruling striking down parts of the anti-choice law. Most of his patients are local residents or visitors from nearby.

Growing up in Texas, Kumar heard stories from friends and family about how difficult it was to access abortion compared with other states, which grew his desire to pursue medical school, with the hope he could help ensure Texas women receive the health care they "deserve." During his nearly three years in practice, Kumar has performed about 4,000 abortions, with somewhere between 300-500 of those through a procedure called dilation and evacuation, or D&E, the safest and most common type of second-trimester abortion, performed at around 15 weeks of pregnancy. Doctors dilate the cervix and remove the fetus with surgical instruments during the typically one-day, outpatient procedure.

However, Senate Bill 8, a package anti-abortion law passed by the Texas Legislature this session, includes a ban on D&E and imposes criminal penalties in the form of a state jail felony (punishable by a minimum of 180 days, and up to two years in jail, and a fine of up to $10,000) for doctors who violate the provision, with the exception of vaguely defined "medical emergencies." Rath­er than needlessly over-regulating clinics, as with HB 2, the new ban takes a different tack, one born from the National Right to Life Committee: attacking abortion methods outright by arguing that a safe medical procedure is "inhumane" to a "live" being – the fetus. The ban forces doctors to jeopardize patient health and safety by violating their standard of care, all in the name of ideological and politicized state law.

“I am concerned about the health of women in Texas.” – Dr. Mark Nichols

That's why Kumar and fellow abortion providers, including individual physicians and Whole Woman's Health and Planned Parenthood, represented by the Center for Reproductive Rights and Austin attorney Pat O'Connell, took Texas to court in August, arguing the unconstitutional ban poses an undue burden on abortion-seeking women. (Due to the criminal punishments, plaintiffs also name county district attorneys, including Margaret Moore, in their suit.) They secured a short-term win from U.S. Federal Judge Lee Yeakel, who prevented the law from taking effect as scheduled on Sept. 1. Providers returned to Yeakel's court last Thursday, Nov. 2, for a five-day trial on the merits of Whole Woman's Health v. Paxton, and to permanently stop the law from going into effect. (The case is expected to conclude on Wed­nes­day, as this issue goes to press.)

The only medically proven alternative to D&E is mimicking delivery, called induction of labor. The more painful and expensive procedure, which accounts for only 5% of second-trimester abortions, must be performed in a hospital and can last up to three days. Alternately, the law would allow D&E if doctors cause fetal demise first, a typically painful injection of either the drug Digoxin or potassium chloride (KCl). Those procedures are not only medically unnecessary but also add risk, pain, price, and logistical barriers, with little to no benefit, testified plaintiff physicians. And in the case of Digoxin, a woman could end up delivering the fetus outside of a health care facility. 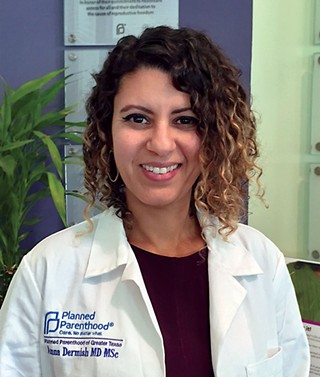 Kumar established the many barriers Texas women must already face to get an abortion, including the state-mandated 24-hour sonogram waiting period; securing time off work and child care, and cost. Fetal demise could add to those barriers by tacking on a third medical visit, higher expense, and risk of complications, such as infection. And even more grisly, KCl injection has caused cardiac arrest in some cases. "The benefits do not outweigh the risk," said Kumar. Using Digoxin "would not help the health and safety of my patients."

Fellow Austin abortion doctor Amna Dermish, regional medical director for Planned Parenthood of Greater Texas, echoed the concerns. She discontinued the use of Digoxin injection above 18 weeks in 2015, after middle-of-the-night calls about patients experiencing pain. She testified that she wouldn't feel comfortable administering the drug past 17 weeks if the ban goes into effect, and would likely refer some patients out of state. "It would put my patients at unnecessary risk," she said.

The fetal demise procedures are more complex and require extra training, and could also be fatal if administered incorrectly, noted Dr. Mark Nichols, an Oregon-based physician. "I am concerned about the health of women in Texas," he said. Fetal demise is rarely ever performed before the 18th week, meaning doctors would be forced to tread largely untested and unstudied territory. Speaking to that risk, Dr. Robin Wallace, medical director of the Southwestern Women's Surgery Center in Dallas, compared the proposed methods with medical experimentation: "I think it would be inappropriate and would be experimenting on my patients unnecessarily."

For the "Dignity of the Unborn"

The state has long argued for abortion laws under the guise of women's health and safety, but they tossed that strategy aside when defending the D&E ban, beginning with their weak first witness, a former abortion doctor turned anti-choice activist. Having performed 1,200 abortions, including D&E, Dr. Anthony Levatino said he reversed course on the procedure three decades ago after his adopted daughter was killed in a car accident. He now spends his time as an anti-abortion speaker castigating the procedure as "absolutely brutal" and "gruesome." Strikingly, Levatino's Mon­day testimony was devoid of any medical reason why D&E shouldn't be performed – offering purely emotional and ideological reasons. Attorney General Ken Paxton, in a rare visit to the courtroom, further weakened the state's flimsy defense after that day's testimony, when he said the measure is meant to protect the "dignity of the unborn." (The name of the law itself is indicative of its lack of scientific grounding; "dismemberment" abortion is not an actual medical term, as some doctors corrected throughout the week.)

The state's other witnesses didn't help their case, either. Plaintiffs established that the two medical ethicists in support of the D&E ban, Dr. Farr Curlin of Duke Divinity School and Carter Snead, a professor at Notre Dame Law, were anti-abortion activists. (Snead even led an international "boot camp" institute devoted to breeding "advocates for the unborn.") Yet somehow, they testified, their views on abortion didn't influence their ethical opinions on the stand. Dr. Mikeal Love, an Austin "natural family planning" OB/GYN, is a regular legislative witness in support of abortion laws and has donated to Texas Alliance for Life, making him a hardly neutral witness. Plaintiffs criticized Duke professor Dr. Monique Chireau for "cherry-picking" data on fetal demise – a procedure she had never performed – to downplay its harm, and noted she had been paid $600 per hour by the attorney general to compile studies she had never previously laid eyes on. Chireau believes abortion is "an act of violence" and promotes scientifically unproven ideas that the procedure causes mental health defects, a review of her background shows.

Aside from the lack of impartiality and expertise in abortion care, no witness presented concrete evidence that the proposed law advances the health and safety of women – a requirement reaffirmed by the U.S. Supreme Court.

Yeakel, by now a regular arbitrator of the state's anti-choice laws, previously blocked the ban – writing it would leave women with more "complex, risky, expensive, and difficult" abortion procedures – leading observers to believe he will likely again rule favorably for abortion providers. Either way, both sides are expected to appeal to the conservative 5th Circuit Court of Appeals, an all-too-familiar journey for abortion laws in Texas. Meanwhile, pro-choice advocates stand ready to fight in the face of a state that has again prioritized the life of a fetus above the life of women. Texas is framing this case like it's "no big deal" that women will be put at risk – and they're doing it in a "really cavalier way," Amy Hagstrom Mil­ler, head of Whole Woman's Health, told me outside the courtroom. Hagstrom Miller, who took the HB 2 case all the way to the Supreme Court and won, said with confidence that her team is ready to do the same with SB 8. "The [SCOTUS] case solidly and clearly decided you need medical evidence when passing abortion laws, and Texas is blatantly ignoring it," she said. "Dare I call it swagger."

A version of this article appeared in print on November 10, 2017 with the headline: Health Risks & Pain for Patients