Federal Judge Lee Yeakel on Oct. 31 dismissed April Bal­combe's lawsuit against the county alleging sexual harassment and retaliation. Despite considering the case "de novo" (to rule without deferring to the magistrate's finding), the judge still adopted Magis­trate Judge Mark Lane's recommendation to dismiss in light of Title VII of the Civil Rights Act's personal staff exemption, which bars elected officials and their staff from suing a government entity.

Balcombe worked as a court reporter for County Judge Elisabeth Earle in 2015. Shortly after she was hired, Balcombe claims, she was sexually harassed by court deputy bailiff Vince Wade. The sexual advances stopped after an incident that March, but Balcombe has cause to believe Wade then began breaking into her office and tampering with her computer. Balcombe filed a formal complaint with Earle a few months later, and alleges Earle began retaliating against her in response, ultimately resulting in her termination in October 2015. She sued the county last September. Despite having evidence of Wade's harassment and tampering (Balcombe set up surveillance cameras in her office), Balcombe was never given a chance to share it with the court. In September, Lane recommended that Yeakel grant the county's summary judgment and dismiss her claim because, he concluded, the duties she conducted in her role as court reporter made her a member of Earle's personal staff.

Yeakel's ruling contends he considered the entire case as well as applicable law. He's chosen to overrule Balcombe's objections, grant the county's summary judgment, and "accept and adopt [Lane's] report and recommendation." Balcombe said after the ruling that she feels "defeated," and is discussing next steps with her attorney.

A version of this article appeared in print on November 10, 2017 with the headline: Lee Yeakel Dismisses April Balcombe’s Suit 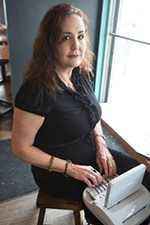