Activists out to Derail Police Contract 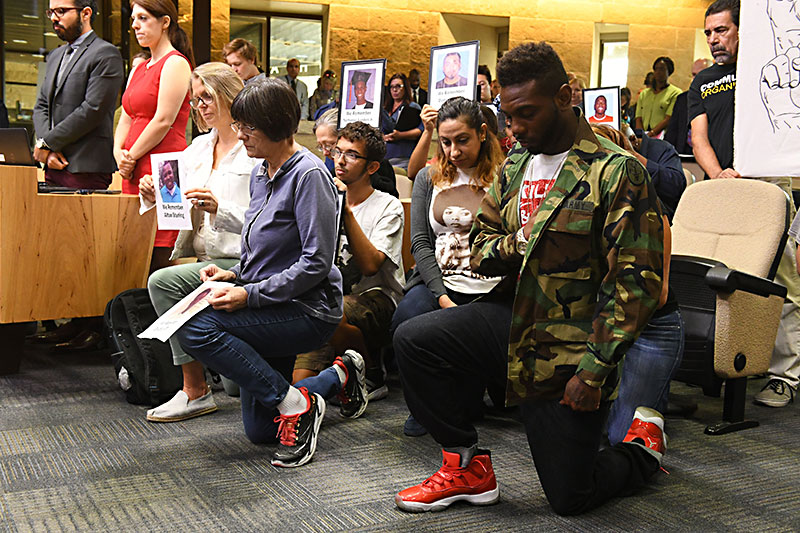 Demonstrators kneel before the start of the Oct. 19 City Council meeting, to protest police misconduct. (photo by John Anderson)

Disagreement was rife over the Austin Police Association's pending contract Mon­day night at the Public Safety Commission. The full body hadn't read the thing, raising questions about whether they could even vote on a recommendation. They ultimately punted the issue onto December's agenda, three days before it hits City Council.

Commissioners did hear a briefing from Labor Relations staff, including the agreed-to measures that originated through community input. A coalition of groups spent the full summer in the ears of council members and city negotiators ("180 Days Later," Sept. 15), and some of their goals did make it into the final agreement. But activists maintain the union's concessions are not enough, and have been calling for Council to send terms back to the table, or to scrap the union's contract entirely. Monday's meeting presented their first formal opportunity.

Commissioner Kim Rossmo, a former Van­couver cop who now teaches criminology at Texas State, proved a vocal presence, questioning whether the groups represent the true feelings of Austinites, and fretting over their efforts to derail contract negotiations at this point. "We kept hearing about community input, but I've never heard of these groups. And [they] certainly have not communicated with my community or come to our neighborhood association," he said. "So really what they're expressing is not 'the' community. ... It worries me that they're getting involved in contract negotiations. We elect city representatives. We elect a mayor. There's a whole process in place for dealing with government business in a democracy. And the last thing we want are hiring problems or labor unrest or uncertainty or morale issues. Because that will cause us more problems in the long run."

A city negotiator reminded that Council asked for public input, and that these were the groups that weighed in with written suggestions. Austin Justice Coalition founder Chas Moore also rebuked Rossmo. "I find it very offensive that somebody that hasn't heard of my organization [would] speak so wildly about it when we have been to every district and have had town halls in every district about this topic," he said. "I also find it very interesting and compelling that an older white gentleman hasn't heard of the Justice Coalition, because he's not directly affected by these issues and police brutality in this city."

“What are people’s lived experiences? That should be just as valid, if not more valid, than seeing a spreadsheet.” – Daniela Nuñez

Commissioner Daniela Nuñez said she's not only familiar, but hopes the commission can take the coalition's points of view into account. "It should be a wake-up call to people on the Commission to be proactive and try to engage with groups," she told the Chronicle after the meeting. "Maybe they don't think exactly like you, but that's part of our job. Requesting data is a part of what we do, but it's also, what are people's lived experiences? And that should be just as valid, if not more valid, than seeing a spreadsheet that doesn't tell the full stories."

Rossmo remained skeptical the following afternoon, and by and large, those spreadsheets do show that the city majority is happy with its present policing. But he's more concerned with efforts to derail any agreement, again warning of unintended labor consequences around the city.

While commissioners play catch-up on contract minutiae, Moore and his cohorts turn their attention toward council members. They've been meeting individually with staff, hitting community meetings throughout the city, and organizing demonstrations, such as the Council kneel-in in late October, when members took a knee in Council chambers with the families of victims of police violence.

Joining that protest was CM Greg Casar, who earlier this summer advocated for more transparency and accountability in the contract. Casar said this week that the negotiators should "probably" return to the table. "This movement and these groups of activists have won really important things through this process that people never would have thought they would've won before," he said. "On the other hand, some of the things that they've won seem so basic and so commonsense that it's almost hard to call them wins in the first place." Casar said the coalition's presence before Council at the onset of negotiations helped secure those victories. "These organizers ... have achieved so much more than people expected, and I think we need to give them a chance to achieve even more than that."

His colleague Ann Kitchen found herself a target of those efforts two weeks ago at a community forum in a South Austin church, a few days after the union and city agreed to terms. Kitchen declined to comment on this story but appeared heavily engaged at that meeting, asking questions of the panelists and speaking directly with coalition members. "Really, the goal is to get people in those districts to understand the issue, and more specifically to tie it to the role the union contract plays into the issue of police brutality and misconduct," said Chris Harris of Grassroots Leadership. "Then for them to go their to council members, because ultimately the Council is going to decide what happens."

Harris and others count Kitchen's participation as a win, and also the resolution the Travis County Democratic Party recently passed, which calls for increased accountability within the contract, and following Obama administration guidelines for police transparency and accountability.

Njera Keith, who founded the advocacy group Black Sovereign Nation, acknowledged that the union's concessions so far might seem incremental to some, but that the groundwork is essential. "We're looking at it as this radical thing – eliminating meet-and-confer," she said. "That's not going to completely change the culture of policing either. That's not going to mean that next year, however countless more black and brown people are not going to die or be traumatized by APD. But what it will mean is we're breaking this power structure the APA has had on lock for some time. And that is extremely important if we want to see incremental change continue to happen on any meaningful level." 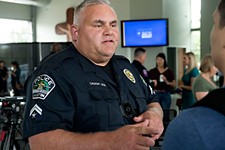