Van Boven vs. the Texas Medical Board 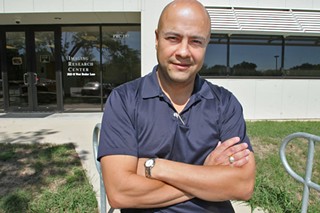 The Dr. Robert Van Boven story took another discouraging turn last week, when the Lakeway neurologist was turned away in his attempt to persuade the Texas Medical Board to consider ratification of the Sept. 15 ruling by state Administrative Law Judge Hunter Burkhalter. Burkhalter's ruling exonerated Van Boven of charges by two patients in 2015 that he had engaged in "boundary violations" during their treatment, or had behaved "unprofessionally" with a third. Burkhalter had reiterated his ruling (made following a weeklong hearing earlier this year) last week, overruling exceptions to his decision made by the TMB staff. In a letter to interim TMB Executive Director Scott Freshour, Burkhalter made two minor corrections to details in his ruling that still entirely exonerated Van Boven, and otherwise declined to "rehash" reiterated arguments he had already rejected. ("Judge Clears Van Boven of Mistreating Patients," Sept. 20)

Since pursuant to the initial TMB restrictions against Van Boven and the glacial pace of the TMB review, the doctor has been effectively unable to practice medicine for 19 months, and he asked that his case be added to the Oct. 20 agenda of the TMB, so that his name could be cleared and he could resume his practice. Freshour suggested instead that Van Boven wait for the December board meeting – and that in the meantime, he might be provided with a "chaperone" to monitor his interactions with patients. Under the law, the TMB's only authority is to either accept Burk­halter's ruling granting exoneration as is, or appeal it to a state district court.

In response, Van Boven's attorney, Mark Beaman, wrote directly to the board members to plead the doctor's case on an emergency basis, writing "this restriction has devastated Dr. Van Boven's practice and his ability to generate income." Not only did the board refuse to act (citing open meetings notice requirements), they did so via a press release justifying their refusal on the grounds that Burkhalter's final ruling had not been anticipated soon enough. More­over, the board statement suggested they would engage in a full review of the judge's ruling: "The board wants to make clear that it will not be pressured into a premature consideration," they wrote, even citing recent news "headlines" about sexual harassment as further justifying their delay.

What happens next is uncertain, although the TMB appears to have bought itself even more trouble. Rather than wait for December, on Wednesday Van Boven filed a lawsuit against the TMB, charging the board retaliated against him, violated his rights to due process, and engaged in a "civil conspiracy." The latest action follows his already pending lawsuit against Baylor Scott & White, currently the managers of the Baylor Scott & White Medical Center at Lakeway, the for-profit hospital at the center of Van Boven's story. The doctor is not shy about defending himself.