Argument over use of medical funding will continue in court 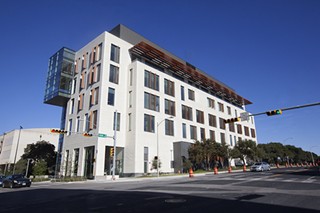 The other shoe finally dropped last week in the ongoing dispute over Central Health­'s underwriting of the Dell Med­ic­al School at UT-Austin, a process approved by Travis County voters in 2012 but which – opponents and now plaintiffs argue – is not in accordance with state law. Three county residents (Rebecca Birch, Richard Franklin III, and Esther Govea) are the named plaintiffs in the lawsuit, but attorney Fred Lewis (now assisting Philip Durst of Deats, Durst, and Owen) has been blasting the health care district (and Travis County) for some time, insisting that the funding is being misdirected.

Sarah Eckhardt said she believes Central Health and UT-Dell are doing exactly what they told voters they would do in 2012.

Lewis' persistent claims are reiterated in the brief initial pleading – essentially, that as he reads state law, Central Health funds (collected via property taxes) can be spent only on direct health care for indigent county residents. The district and the county have consistently responded that not only has the current arrangement with Dell Med been approved by county voters, that in fact it represents the most effective way of providing health care for people otherwise unable to access care – and they point to several initial programs successfully delivering that care.

"The issue in this case," argues the petition, filed in the state's 345th District Court, "is not whether it would be cool or wonderful to have a medical school in Austin ... defendants are not complying with Texas law and are expending funds on items unrelated to its statutory authorization of providing health care to our poor and most vulnerable residents." Central Health provides $35 million a year to UT-Dell under its affiliation agreement with Dell Med and the Seton Healthcare Family (newly renamed "Ascen­sion Seton"), and the plaintiffs argue that the funding (and the medical school's spending) is not "specifically authorized" under the Texas Constitu­tion and state law. They're asking for an injunction against Central Health (and its CEO, Mike Geeslin), and presumably an end to further funding of the medical school.

Responding to the announcement of the lawsuit, Central Health said it welcomes "finally resolving this issue," and said the legal action would not "deter Central Health from its mission of providing access to high-quality care for Travis County residents with low income." The district's statement pointed to its growing service to low-income residents, and said that it is "confident Central Health's investment in Dell Medical School at The University of Texas is legal and appropriate," citing the relevant ballot language of the 2012 property tax referendum that authorized the medical school. "Last year we funded care for 143,642 Travis County residents with low-income," read the statement, "about 1 in 10 people in our county and a six percent increase over 2015."

Central Health argues that its funding of the medical school is in direct and necessary service of its mission to provide health care to the poor; presumably that claim will now be legally tested in court.

Central Health is overseen by the Travis County Commissioners Court, and Travis County Judge Sarah Eckhardt said she welcomes the lawsuit as an opportunity to settle the controversy. "This is a conversation that the County needs to continue," she said, "as this is a very big public/private partnership and we always need to see proof of the dividends." Eckhardt said she believes Central Health and UT-Dell are doing exactly what they told the voters they would do in 2012. "I think that some people in the community would like to roll back that decision."