April Balcombe may never get her day in court. On Sept. 27, one year after filing a federal lawsuit against Travis County alleging sexual harassment and retaliation in the workplace during her employment as a court reporter for County Judge Elisabeth Earle, Magistrate Judge Mark Lane recommended that the court dismiss Balcombe's claim in light of a Title VII Civil Rights Act loophole known as a personal staff exemption. Turns out, Travis County has a similar exemption on its books.

Balcombe began working as Earle's court reporter in January 2015. She was excited about the career change, and the regular work hours and health insurance benefits that came with working for the county. But a few weeks into the job, Balcombe says, she started receiving unsolicited sexual attention from the court's deputy bailiff, a member of the Travis County Sheriff's Office who was also staffed in Earle's office. It began with uncomfortable advances: The bailiff, Vince Wade, would tell her how "sexy" she looked and compliment her legs and breasts. That March 30, Wade allegedly kissed Balcombe on the neck and told her, via text message, that she "smelled good."

Balcombe's suit alleges that Wade shortly thereafter ceased advances and began acting "cold and distant." She claims he yelled at her in court several times and filed a complaint against her because she "dressed too sexy." Items from her office began disappearing, prompting her to set up surveillance. Several video clips she shared show a man – who Balcombe says is Wade – entering her office while she was out, rummaging through her desk and cabinets, and at one point crawling beneath her desk with what looks like a CD. For the next few months, Balcombe claims, her computer was routinely hacked and files, including several surveillance videos, were deleted.

That July, Balcombe submitted a formal complaint to Earle and Court Administrator Debra Hale. She was temporarily placed on administrative leave and questioned by the County Court's civil litigation attorneys. Upon returning to work, Earle changed Bal­combe's hours and gave her additional duties, which Balcombe considered retaliatory. "It felt like they were trying to overwhelm and sabotage me," she said. She recalls being locked out of the women's restroom after Earle changed the locks, and, according to Balcombe, "gave keys to all other staff except me." Balcombe also said she received little computer support despite her fears of being hacked – at least until she contacted the FBI's cyber security department. (Balcombe believes an investigation is still ongoing.) She was fired on Oct. 25, 2015, three days after her lawyers sent Earle a cease and desist letter for her perceived retaliation.

The county's response, filed last October, alleges a different story: that Balcombe showed "performance deficiencies" and became "increasingly more hostile and resistant" to the job, and to Earle. (The response also says Earle "took immediate corrective action" to make sure Balcombe and Wade never worked together again.) The county claims she was fired for two subsequent mistakes during the week of Oct. 12. Earle said she couldn't comment on pending litigation, but did write: "No harassment of any kind will be tolerated by my office. Ms. Balcombe's allegations were taken very seriously, were independently investigated, and were found to be without any merit."

The case currently hangs in limbo. Lane, appointed to assist with pretrial hearings, has recommended that Judge Lee Yeakel grant the county's motion for summary judgment and dismiss the case, arguing that as a court reporter Balcombe was part of Earle's personal staff and therefore barred by Title VII's personal staff exception. The loophole protects cities, counties, and states from being sued. According to the county's motion for summary judgment, filed in July, the "term 'employee' shall not include any person elected to public office ... or any person chosen by such officer to be on such officer's personal staff." That is, you're not an employee if you were elected into office – or if you were individually chosen to work within that office.

Balcombe said she and her previous attorneys decided against filing the civil suit in Travis County to avoid any conflict of interest. However, her current lawyer Robert Goodman said there's a chance the personal staff exemption could have been a nonissue in a district court. He said there is "not an exception to the definition of employee under Chapter 21 of the Texas Labor Code, which essentially has the same prohibitions against discrimination." Though Goodman said it isn't "directly relevant" to Balcombe's suit, Travis County does have a similar policy. According to Chapter 9 of the Human Resources Policies and Procedures, the county's policies do "not apply to the employees of any Elected Official unless that Elected Official expressly adopts it in writing."

It's unclear if Earle had adopted the policy. She did not specifically address that in her response to me, and both Tracey Calloway, the county's HRMD director, and Hale said it would be "inappropriate to comment on pending litigation." But Earle's July affidavit reads: "Balcombe also signed an 'At-Will Acknowledgement' ... recog­niz[ing] and acknowledg[ing] that Chapters 9 and 15 [of the Travis County Code] do not apply to [her]." Earle did confirm that she adheres to the Travis County Criminal Courts Personnel Manual, which the county adopted this June, and which forbids employee harassment of any nature and promises a Criminal Courts investigation.

Making matters more complicated is the consideration of whether court reporters indeed fall under "personal staff." Only the 8th Circuit Court of Appeals has addressed the issue, and that case (Hemminghaus v. Missouri) relied on six factors set by the 5th Circuit during Teneyuca v. Bexar County, to determine whether an employee falls into the exception. The court reporter in the 8th Circuit case was deemed to be personal staff. The Department of Labor issued opinions in 1998 and 2005 stipulating that court reporters do not represent judges in the public eye, but Lane argues that Balcombe's chamber roles were "distinguishable from the court reporter role addressed in the opinion letters" and did represent Earle, referencing Hemminghaus and Teneyuca.

Yeakel is expected to issue a ruling within the next few months. If he sides with the county, Balcombe says she will appeal to the 5th Circuit Court of Appeals "only for other people.

"This is definitely an issue that needs to be brought to the public's eye and needs to be changed," she said, "regardless of whether I'm spit under the personal staff exemption or not. Nobody should fit under that exemption." 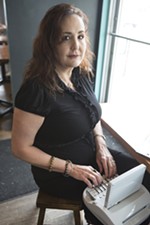