Hernandez to ICE Reversal Critics: “This Is Not Over” 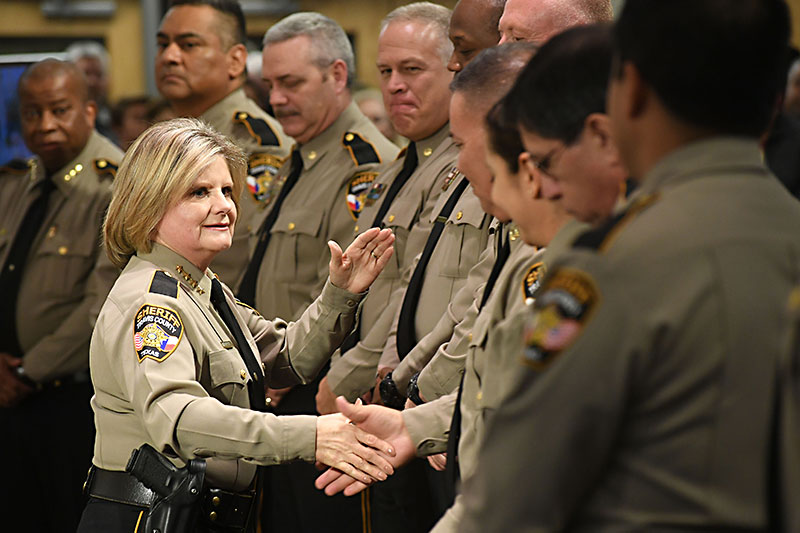 Tempers flared at a town hall panel last week put on by the city's Commission on Immigrant Affairs, when Travis County Sheriff Sally Hernandez – onstage alongside APD Chief Brian Manley and Mayor Steve Adler – had her trust called into question by audience members over the recent reversal of her agency's Immigration and Customs Enforcement detainer policy, following a federal court ruling. "There was a lot of tension at the beginning of the meeting," recalled Karen Crawford, who chairs the city commission. "Community groups accused her of giving up and no longer sticking to her promise. There was some distrust. [Hernandez] seemed to want to get across that she hasn't given up and this was the smartest decision to make at the time – that she's erring on the side of the law, so when [the SB 4 suit] goes to full trial soon, she doesn't walk into the courtroom as a lawbreaker."

“Whether we like it or not, my policy changed because the court’s ruling made honoring ICE detainer requests state law.” – Travis Co. Sheriff Sally Hernandez

On Sept. 25, just two weeks before the town hall panel, the U.S. 5th Circuit Court of Appeals partially rolled back a lower court's ruling on the so-called "sanctuary cities" law, Senate Bill 4, (arguably) forcing cities and counties to honor all immigration detainer requests. Hernandez complied with the ruling, nixing her previous position limiting automatic cooperation to those charged with or convicted of capital murder, murder, aggravated sexual assault, or human trafficking – a policy that gained national recognition for its failure to be deferential to anti-immigrant state officials. But she didn't make the new decision with ease; rather, the ruling resulted in a "sick, sinking" feeling in her stomach that she says continues to linger. "I don't like the change any more than any of you do," she told the critical crowd, as if her policy reversal was more akin to begrudging obligation than obsequious compliance. "Not at all."

Nevertheless, her office's compliance has led to censure from parts of the community and even the media – as evidenced in a recent story in The Intercept charging that Hernandez "broke her promise" to keep ICE out of jails. Count immigrant rights advocacy group Grassroots Leadership among those dissatisfied with Hernandez's reversal: spokesperson Cristina Parker says the 5th Circuit's opaque wording means Hernandez had a shot at sticking to her previous policy.

The panel wrote in its ruling that "The 'comply with, honor, and fulfill' requirement does not require detention pursuant to every ICE detainer request. Rather [it] mandates that local agencies cooperate according to existing ICE detainer practice and law" – and legal opinions are mixed on how the 5th Circuit's ruling should be interpreted. The vague language leads some attorneys, including SB 4 suit plaintiffs with the Mexican American Legal Defense and Educational Fund, to conclude that the appeals court allowed local jurisdictions latitude to decline detainers that could violate constitutional rights or other laws on a case-by-case basis; others believe it indicates that local jails must follow all ICE detainers. "The ruling is unfortunately unclear," said Parker. "But as far as we're concerned, there's no reason [Hernandez] couldn't side with other legal minds.

"It's disappointing and damaging to the community that she would choose to go with one interpretation over another."

However, taking the risk of interpreting the ruling the other way could land Her­nan­dez in hot water – and probably swiftly, as Gov. Greg Abbott and Attorney General Ken Paxton have been publicly and aggressively gunning specifically for the sheriff for months in the state's fight to uphold the discriminatory law. Offending sheriffs could face class A misdemeanor charges, which carry a fine of up to $4,000 and up to one year in jail.

In an email sent this week, Hernandez wrote, "Whether we like it or not, my policy changed because the court's ruling made honoring ICE detainer requests state law." She called allegations that she "broke her promise" about detainers a "gross misrepresentation. ... I campaigned on the promise that I would change the ICE policy of the Travis County Sheriff's Office and I did. I implemented that policy knowing it was lawful to do so," she said. "The court's ruling on SB 4 has made it state law for me to revise that policy."

Invested parties eagerly await more clarity on the ruling. The 5th Circuit will analyze the law's constitutionality on Nov. 6, hopefully elucidating the murky language in the process. Hernandez likens the saga to a boxing match: We're in round three, she said. When the bell rings again, she'll be back in to fight. "SB 4 continues to move through the courts. This is not over by a long shot." 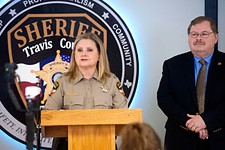 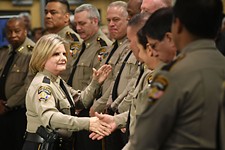 Sheriff Sally Hernandez Continues to Do "What’s Right"
Besieged by the state GOP, Hernandez shows no sign of backing down from her immigration policies