Texas “must not become a sanctuary state for abortions,” says A.G. 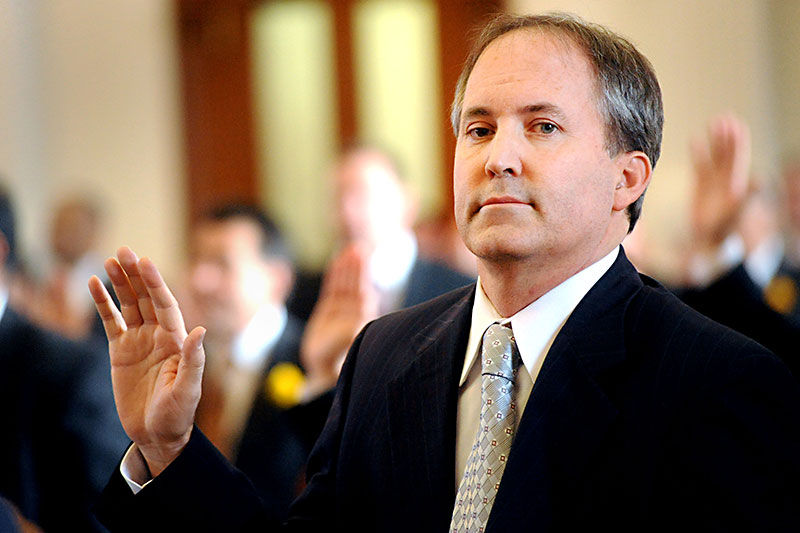 Held "hostage" by the Trump administration, an undocumented Texas minor seeking abortion has finally been granted her constitutional right after struggling to obtain abortion care for one month. In a reportedly growing trend, the federal government's Office of Refugee Resettlement blocked the young girl from accessing abortion, a move fully backed by Texas officials. Seizing the situation as an opportunity to double up on his anti-choice and anti-immigration red meat, Attorney General Ken Paxton declared in a court brief that Texas "must not become a sanctuary state for abortions."

Last week a California federal judge refused to hear the girl's emergency legal plea requesting the abortion care due to venue, leaving the migrant teen's fate in the hands of a Washington, D.C., court. Critical of federal attorneys, U.S. District Judge Tanya Chutkan said during a hearing held on Wednesday that she was "astounded" that the office was forcing the girl to carry her pregnancy to term, and ordered officials to transport her to an abortion clinic "promptly and without delay."

Paxton declared in a brief last week that Texas “must not become a sanctuary state for abortions.”

According to court records, 17-year-old Jane Doe, who fled from Central America unaccompanied, was blocked from going to an abortion clinic while at a federally funded migrant center in Brownsville. Instead, Doe was sent to a religious, anti-choice crisis pregnancy center, where she was "forced" to look at a sonogram. "Defendants have been talking to me about my pregnancy. I feel like they are trying to coerce me to carry my pregnancy to term," said Doe of officials with the ORR, under the umbrella of U.S. Health and Human Services. Doe wishes to remain anonymous, fearing retaliation from her abusive family. However, she claims ORR officials already revealed her pregnancy to her mother and have pushed her to do the same.

As per Texas law, Doe obtained the necessary court authorization (called a "judicial bypass") for the abortion and had scheduled a state-mandated sonogram appointment with a physician for Sept. 28. The procedure itself was scheduled for the next day. But Doe says the shelter forbade her from attending the appointment, even when her court-appointed guardian offered to provide transportation.

Austin attorney Susan Hays, the legal director of Jane's Due Process, helped Doe secure her judicial bypass, and notes that her story is not a one-off incident. Rather, it appears to fit a pattern within the Trump administration's anti-choice "fanatical" Office of Refugee Resettlement. "From prior experience we knew ORR was acting really strange when it comes to reproductive health care, so we anticipated that something bad could happen and were on high alert," she said.

In March, the group similarly aided a pregnant unaccompanied minor in securing a judicial bypass, only to discover ORR had ordered that she be prevented from taking her second dose of abortion medication then forced her to undergo a gynecological exam. "This is some Handmaid's Tale, dystopian stuff," Hays said. The office is led by Scott Lloyd, an anti-choice figure appointed by Trump in March – who made at least one personal visit to a young woman who was seeking abortion in an effort to dissuade her. Lloyd's reign has prompted a policy shift that has deterred shelter staff from "supporting abortion services pre- or post-release; only pregnancy services and life-affirming options counseling," a departure from Obama policies. According to documents sent by Hays, nonmedical, anti-abortion crisis pregnancy centers dominate the list of ORR-approved counseling centers. "We learned that ORR staff were asking [Doe] what she was going to name her baby and emotionally haranguing her to talk to her mother," said Hays.

The ACLU of Northern California added Doe to their 2016 lawsuit against ORR for not providing the full range of health services, in the hopes of receiving an emergency action to allow her to proceed with her abortion and a nationwide injunction to ensure ORR doesn't block any others in her position. However, on Oct. 11, U.S. Magis­trate Judge Laurel Beeler failed to grant the temporary order because the girl lives in Texas, but did make note that the government has no business blocking Doe. "The government may not want to facilitate abortion, but it cannot block it," Beeler wrote. "It is doing that here. There is no justification for restricting Ms. Doe's access."

The clock is ticking for Doe, who is estimated to be 14 weeks pregnant and has already been forced to delay the procedure by a month. Texas law prohibits abortion after 20 weeks, making the court order particularly time sensitive, especially in light of the many obstacles Texas women face when accessing abortion, including a 24-hour pre-abortion sonogram. Many of the minors like Doe are escaping violence and abuse; advocacy groups estimate 60-80% of Central American migrants are victims of sexual assault.

"The Trump administration's action is shocking – a young woman is essentially being held hostage and forced by federal officials to continue a pregnancy against her will," Brigitte Amiri, senior staff attorney with the ACLU Reproductive Freedom Project said shortly before the ruling. "And this case isn't the only one. Nationally, the federal government is obstructing young immigrant women's access to abortion."

Paxton led six other states, including Louisiana and Oklahoma, in defending ORR. "If 'Doe' prevails in this case, the ruling will create a right to abortion for anyone on Earth who enters the U.S. illegally. And with that right, countless others undoubtedly would follow," he wrote. However, the feds are legally required to provide unaccompanied minors with basic necessities, such as housing and medical care, including family planning services and abortion.

Hays believes Paxton acted "unethically" when he blasted out a public email last week announcing his opposition to Doe's case and revealing sensitive information, including her location. "Technically, as AG he's charged with ensuring the confidentiality of bypass cases," she said. "You don't talk about it publicly and you sure don't go and send a press release about it. It's unconscionable."

A version of this article appeared in print on October 20, 2017 with the headline: Judge Grants Abortion to Undocumented Minor Held “Hostage”