Pearl Moen: Out of Jail Already?

Your parole hearing hardly means you’re out on parole 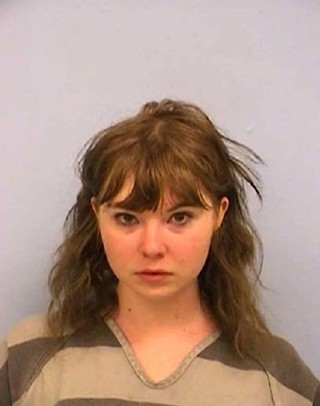 Pearl Moen is up for parole Nov. 8, and nobody's really happy about that – including the assistant district attorney who secured her conviction.

Moen is the Hyde Park teenager arrested last February for the Nov. 14, 2015, stabbing of a woman outside of a friend's apartment. Moen stabbed the victim 21 times before fleeing back to her house, where, an arrest affidavit filed Feb. 29, 2016, notes, she wrote in her journal: "I'll start with the exciting bit. I stabbed an innocent woman to death earlier today. ... It was absolutely fantastic. Murder gives me a high unlike any other. It feels like this crisp unreality. Flashing & sparkling. Adrenaline & shock. Fight or flight mode. How do I even go about describing it. The whole thing was unreal. I'm so proud of myself."

Except she didn't actually murder anybody. The victim, a nurse whose name has been intentionally left out of all reports on the attack, even when she's being interviewed, made it to a hospital and underwent emergency surgery to save her life. (Subsequent procedures would treat a collapsed lung and permanent damage to several nerves and tendons, according to APD's affidavit.) Moen went on living her life for another three months, until she got herself into what police describe as a "disturbance" with her mother, which resulted in bodily injury – and her mother, having recently seen a flier posted about the stabbing with a description of the suspect, called APD to say her daughter owned "many knives" and at one point "made a joke to them about the stabbing incident by taking out a knife and pretending to stab" her boyfriend. Detective Robert Holsonback obtained a search warrant for the home, where Moen was found and arrested on a family violence charge. Investigators combed through the house and found her journal; it contained "detailed descriptions" of the stabbing as well as a hand-drawn picture of a male and female lying on a blanket on the sidewalk next to a hedge – a scene that matched that of the attack down to the victim's clothing.

Moen, now 20, was held on a $1 million bond, and indicted in May 2016 on two charges: Aggravated Assault – Serious Bod­i­ly Injury With Deadly Weapon, and Crim­inal Attempt – Murder. The case went to Assistant District Attorney Joe Frederick, a career prosecutor who's worked in the Travis County D.A.'s Office since 2007. (He now heads the child abuse unit under current D.A. Margaret Moore, but served as trial chief for the 403rd District Court under Rosemary Lehmberg, and carried over a few cases, including Moen's.) Frederick offered a plea deal: 15 years for attempted murder, which carries a maximum sentence of 20.

Texas has a statute in its Code of Crim­inal Procedure that's commonly known as "3G" – that is, Article 42.12(3)(g) of the lengthy code. It designates crimes that the state deems to be "very serious." Capital murder is listed here, as is aggravated kidnapping, injury to a child, sexual assault, criminal solicitation, or "any felony where a deadly weapon was used or exhibited during the commission of the crime or during the flight from the crime." Code stipulates that those found to have committed 3G crimes be ineligible for parole until half of their sentence has been served, "good time" or not. Non-3G crimes allow convictees to be up for parole 1/4 of the way through their sentence, minus good time, which could ultimately reduce one's time spent between incarceration and their first parole hearing from 1/4 of their sentence to 1/8.

Oddly, attempted murder does not rise to the level of a 3G crime, unless there's an affirmative finding that a deadly weapon was used. Frederick did not know that when he offered the plea bargain. In fact, as he explained quite candidly last Friday, he didn't actually realize the peculiarity until early on this summer, when Moen's victim contacted him to ask why Moen was due for a hearing.

"Had I known it wasn't a 3G, I would never have gone for attempted murder," he admitted between mea culpas.

Frederick called the state's Board of Par­dons and Paroles this summer to encourage a delay on Moen's hearing, to no avail. He's since filed a protest of her eligibility, and on Friday called her "highly dangerous." Meanwhile, neighborhood groups in Hyde Park have sent letters to the BPP requesting Moen's parole be denied. (Such letters were due Oct. 7.)

Both Frederick and D.A. Moore were adamant this week that Moen's eligibility in no way portends her actual parole, and anecdotally between neighbors and media coverage of the case, it does seem as though there's some conflation between the reality of a hearing and the likelihood of an approval. (Said Moore: "We think the likelihood of her being paroled is very low.") The BPP posted a 34% approval rate last year, with violent aggravated non-sexual cases drawing 36% and those classified as violent non-aggravated non-sexual registering at 27%. (Moen's case would be classified as non-aggravated.) Commissioners employ an in-depth, 16-point scoring system to determine if individuals should be granted their parole, considering age (both current and at the time of the offense), offense, criminal history, disciplinary records, and efforts made toward rehabilitation.

Moen is currently being housed at the state's Hilltop Unit in Gatesville, about an hour northwest of Georgetown. The prison offers mental health rehabilitation, but a PIO for the Department of Criminal Justice said he couldn't discuss what sort of treatment Moen was receiving; doing so would violate the terms of HIPAA.