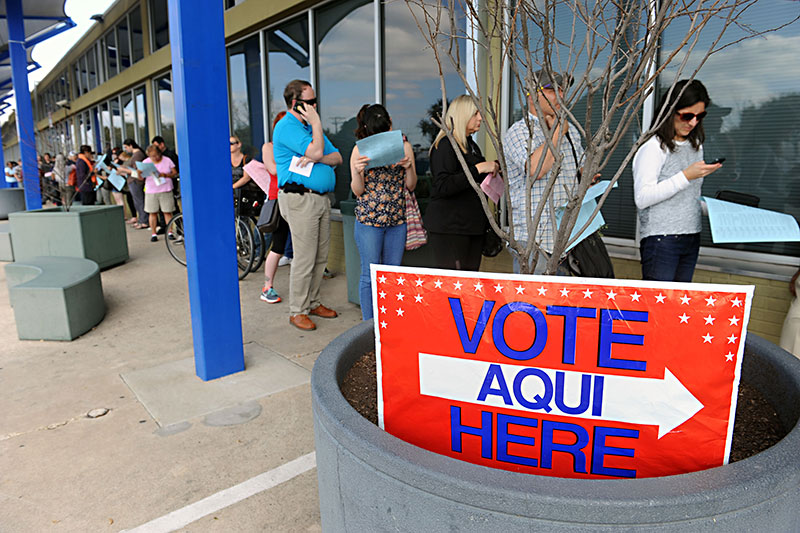 Election security, especially when it comes to electronic voting, is not just a matter of trust. Following last year's elections, and reports that Russian intelligence agencies probed and tested U.S. election systems, it's now also a matter of national security. Yet last week, Travis County Clerk Dana DeBeauvoir told county commissioners that she was canceling an initiative to give local voters a revolutionarily and trustworthy system because no firm would step up to design and implement the software and infrastructure it would require.

It was to be an open-source electronic voting machine with the kind of verifiable and independently auditable paper trail that transparency groups have for years demanded.

That system is called STAR-Vote: an open-source electronic voting machine with the kind of verifiable and independently auditable paper trail that transparency groups have for years demanded. Prior to 2001, Travis County shipped every single paper ballot from every polling station in the county to a central location, then put them through an optical scanner – a process that Rice University professor and STAR-Vote team leader Dan Wallach called "a logistical nightmare." In 2001, the county became one of the first in Texas to adopt the Hart InterCivic eSlate system, picking it over the biggest competitor, the Diebold TSx. That's proven a wise choice in hindsight; the TSx later faced accusations of being disturbingly easy to hack.

The STAR-Vote initiative began in 2009, when the county elections division convened a work group on electronic voting. Two years later, DeBeauvoir's office started looking at a replacement for the eSlate; nothing on the market fit their needs. So rather than replace eSlate with an inferior product, DeBeauvoir got proactive about the next generation of voting machines. Wallach met DeBeauvoir around that time at an elections technology conference. "She stood in front of an audience of mostly computer technology people and said, 'I want your help. We need to make something better,'" Wallach remembers. "And that's not a message that people in my field normally hear."

In 2012, at DeBeauvoir's behest, Wallach assembled a team of cryptographers, statisticians, and developers to explore what a secure, cost-effective, and robust system should look like. A year later, at the USENIX Electronic Voting Technology Workshop in Washington, D.C., Wallach presented the group's initial criteria. First, the system had to use cost-effective, off-the-shelf equipment. (At the time, an electronic voting machine cost around $3,000, versus $1,000 for a tablet.) Second, the voter registration database must be online so voters could cast their ballot in any precinct, but the voting machines must also work offline to guard against any hacking. Third, the machines must run reliably for an entire election day. Finally, and most importantly, the machine must create a simple, clear, and verifiable paper ballot, and provide the voter with a receipt that will allow them to verify their ballot later. The 2013 document was just the starting point, said Wallach, as the team entered "the much more difficult and involved process" of turning a 12-page academic paper into a 200-page plan of action.

Wallach's group was the think tank. It would require external firms to build the system. In 2015, the county issued a request for information, asking potential vendors for their input. Then, last year, DeBeauvoir's office issued a request for proposals, and received a total of 12 bids. But as she told county commissioners on Oct. 3, that's where STAR-Vote fell apart.

The RFP broke the bid down into five modules, so that even if one vendor couldn't develop and supply the entire system, several vendors could form a consortium to build a joint project. Unfortunately, when DeBeauvoir looked through all the bids, key components were always missing. Without those sections, STAR-Vote could not happen in Travis County, and her office was going to have to look to the existing and established market for a replacement system. The plan right now is for a new system to be purchased, put in place, and tested before the 2020 presidential elections. However, DeBeauvoir said, "The main things that we were going to get from STAR-Vote, a paper trail and better security, are non-negotiable."

Wallach doesn't blame DeBeauvoir for ending the initiative – instead, he says she should be lauded for not only seeing the need for secure elections, but also working so hard to implement change. "It's not her job to build the dream election system," he said. "It's her job to keep the trains on time, and make sure that elections happen." If he's frustrated with anyone, it's the handful of major players in the electronic voting machine market for not implementing these changes themselves. Those companies, Wallach said, are too wedded to their current business model of selling expensive equipment – Travis County calculated that STAR-Vote would cost $10-12 million to implement, compared to $14-16 million for a standard product – and long-running support contracts. "They could have read our paper in 2013," he said. "There's no patent. There's no intellectual property protection. They could have been working on it for years, but they didn't."

However, STAR-Vote is already having an impact on the national discourse. In Sep­tem­ber, the U.S. Election Assistance Com­mis­sion issued a new set of voluntary voting system guidelines that included many of the precepts upon which the Travis County system was to be built – particularly, the requirements for a verifiable, independently auditable paper trail. DeBeauvoir said, "I'm not sure that being ahead of our time has been helpful, but it has allowed other elections officials to articulate that this is what they want, and this is what the voters want."

So STAR-Vote isn't dead. With the basic groundwork done, Wallach is optimistic that another jurisdiction, or even a nonprofit or philanthropist, in the U.S. or beyond, will pick up the project. "A good idea is a good idea," he said.

A version of this article appeared in print on October 13, 2017 with the headline: STAR-Vote, DOA

Now Streaming in Austin: Hell on Wheels
Join us tonight for a live tweet of the Roller Derby doc

OMG That's So Gay! Inside the Mind of a Queer Comedian
Online
Policing in Austin & the Upcoming City Budget Process at Online
The Queer and Trans Community Closet at Out Youth
MUSIC | MOVIES | ARTS | COMMUNITY
NEWSLETTERS