Traffic fatalities have not gone down like one would have hoped

Ahead of next Thursday's Vision Zero Task Force meeting, former Texas Monthly publisher and general civic rabble-rouser Mike Levy has sent a note to city staff demanding a presentation by the Transportation Department assessing "why its efforts to reduce traffic fatalities in Austin have been a failure, with MORE fatalities through this date in 2017 (48) versus the same date in 2016 (47), despite a very large budget commitment by the Council to support the plan developed and submitted solely by Transportation." Levy, who serves on the task force, had undoubtedly seen the city's press release on Sept. 15, reading: "This is Austin's 46th fatal traffic crash and the 48th fatality of 2017. At this time in 2016, there were 47 fatal traffic crashes and 47 traffic fatalities." Later, a research analyst with APD told Levy that the numbers in such press releases aren't always current. As of Sept. 19, there have been 48 fatalities in a total of 46 fatal crashes. At this point last year, there were 51 fatalities in 50 fatal crashes. "It's a differential of three," Levy lamented. "So it's still not much."

Some have taken issue with the critical nature of Levy's email, which questioned city staff's urgency in dealing with the problem. "The survivors of these fatalities probably are thinking that if the COA bureaucracy was not taking a 'long term view,' but had a sense of urgency and immediacy ... to prevent even one fatality, their loved ones would still be with them," he wrote. Vision Zero ATX's Nic Moe wrote in response that "publicly calling out staff in such a rude and condescending manner ... is neither a pragmatic way to get your point across nor an appropriate way to recruit allies to your cause," and defended the city's "holistic approach" to tackling traffic fatalities – infrastructure, enforcement, and education – as the only true way to change the status quo. 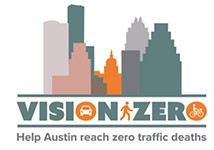