Putting Together the Downtown Puzzle Mayor Steve Adler's complex strategy for a Downtown investment plan has plenty of tentative and moving parts, and a better working metaphor for the project – rather than a "Puzzle" – might be a "Rube Gold­berg." But if he can manage to wrangle the various aspects through a skeptical City Council and a dubious public, the mayor argues that the financial returns will bolster city revenues while addressing a brace of intractable Downtown dilemmas that for years have foundered for lack of funding: persistent homelessness, precarious music clubs, unfulfilled heritage resources, limited walkable destinations.

“Austinites keep asking us to address these problems, but they also insist that we keep property taxes as low as possible. The Puzzle provides a solution.” – Mayor Steve Adler

That's a thumbnail summary of the Puzzle's grand ambitions, and though not every piece is directly interlinked, the mayor has portrayed the project as an interconnected plan to transform the face of Downtown. This is a brief overview; the News stories that follow break out the various pieces for particular attention.

The Puzzle proposal has been in development for more than a year. Laying out the grand design to Council last December, Adler described it as a "comprehensive, integrated vision of ... the future of a part of the downtown core and how it might serve as a major engine for preservation and progress. We've been considering these various issues separately for some time, but like a puzzle, maybe the pieces make the most sense when you see how they all could fit together."

That post to the Council message board was followed by several months of outreach and community input, culminating in a June 2017 report by the Visitor Impact Task Force – 18 representatives of a range of community interests, from the tourism industry, cultural arts, environment, public safety, etc. The VITF recommended to Council most of the major elements of the Puzzle, including a plan for implementation: Supplementing and reallocating the hotel occu­pancy tax would take pressure off the city's operating revenues and property taxes, while addressing underfunded needs. "The combined effect of the Task Force recommendations," wrote VITF Chair James Russell and Vice-Chair MariBen Ramsey, "provides for the continued success of the Austin Convention Center and Visit Austin, maintains the funding for the City's well-established Cultural Arts grant program, and allows for the additional funding for music and historic preservation."

Paying for the Puzzle

The Puzzle had its beginnings in networking over funding to address Downtown homelessness, in the wake of the successful effort (begun under Mayor Lee Leffingwell) to end homelessness among veterans – even as a growing "K2" crisis in the blocks surrounding the ARCH on Seventh Street increased stress on Downtowners, businesses, and public safety resources. Said the mayor, "Austinites keep asking us to address these problems, but they also insist that we keep property taxes as low as possible. The Puzzle provides a solution: an ongoing funding stream that does not raise property taxes. In fact, it would require tourists to pay for these problems that affect tourism."

Formally announcing the Puzzle in July, the mayor said, "We have figured out how to put the Downtown Puzzle together by making tourists pay to house the homeless and by harnessing the power of Austin to benefit all Austinites. This plan won't raise your property taxes, will expand our tax base, and makes a big down payment on the moral imperative to house the homeless." The primary tourism source of that funding stream is the hotel occupancy tax, currently at 15% in hotels citywide, and most of it currently dedicated (as contemplated in state law) to the city's Convention Center and its promotional arm, Visit Austin (the rebranded Austin Convention & Visitors Bureau).

State law allows for an increase in that hotel tax to 17% – only in connection with a Convention Center expansion. Should an expansion be approved, the Austin Hotel & Lodging Association has voted to use that HOT premium to establish a Tourism Public Improvement District, which would share the revenues with the city, funding that is less tourism-restricted than the HOT – presumably to address homelessness while, over time, also helping support the arts, the music industry, and heritage sites such as the Mexican American Cultural Center and the Palm School. "The Convention Center is the key that unlocks other funding for other needs," said Adler. "People are beginning to see it as a way to unlock funds for homelessness Downtown, and the ARCH, and permanent supportive housing."

Although the full Puzzle is a maze (or Downtown street grid) of moving parts, the major elements (with some funding estimates) include:

• Using the funding generated by the HOT increase to address homelessness (annually $4 million, rising to $8 million in 2021).

• A parallel effort to extend the Waller Creek Tax Increment Financing District to underwrite a "chain of parks" with TIF funds and private matching funds.

Those are the major elements of the Puzzle (the mayor's broader ambition includes Medical Center "Innovation Zone" infrastructure, and renovations to Sixth Street and I-35). The centerpieces are the Convention Center expansion, and the use of the consequent increased HOT funding to initiate and drive the other proposals.

Over the last year, the collaborative planning of the proposal included homeless service providers, Downtown business reps, preservationists, cultural arts mavens, hotel reps, public safety officials, and more. As plans move forward (the next formal discussion at Council is Sept. 28), the mayor is counting on a broad range of support already committed to the Puzzle's primary elements. Unanimous, it's not – testimony at the Aug. 31 meeting split between enthusiasts already on board (e.g., the Task Force), and opponents adamantly objecting to any Convention Center expansion, whatever the ancillary benefits.

That Council meeting also unwrapped an unexpected monkey wrench: a Council proposal to reallocate a larger portion of the current HOT revenues toward "historic preservation." Initially blindsided, the mayor was reassured by an amendment that would protect the potential HOT-related implementation of the Puzzle, and by a subsequent budget-reading reduction of the total reallocation. Nevertheless, some opponents are threatening a petition-initiated referendum to block the expansion and kill the project – meaning Mayor Adler's Puzzle remains a work in progress.

A version of this article appeared in print on September 22, 2017 with the headline: Putting Together a Puzzle 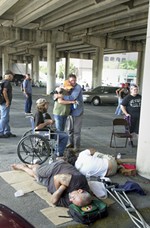