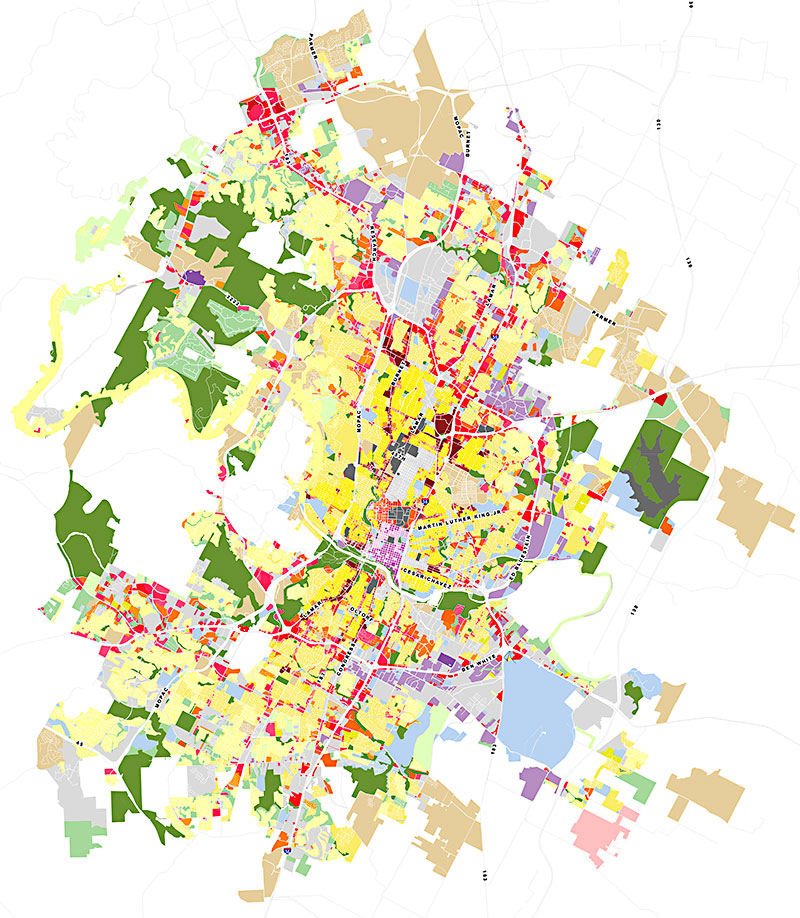 Meet the new zoning map, quite different from the old zoning map

Draft two of CodeNEXT has been out for less than a week, and already the re-rewrite is causing rifts between city groups and neighborhood associations. Yet everyone, from Mayor Steve Adler to code consultants and city staff responsible for the land use code overhaul, continues to reiterate much of the same messaging: CodeNEXT, through all its faults, remains a work in progress.

At 1,394 pages, the second draft has done away with transect zones, and has divided the city between Residential House-Scale, Residential Multi-Unit, Mixed-Use, Main Street, Regional Center, Commercial & Industrial, and Other base zones, each with different categories that vary by intensity. Draft language suggests that the new zones were designed to "implement the City's Comprehensive Plan by providing a mix of intensity of development and a mix of uses that are compatible with the character" of the city.

The code, through all its faults, remains a work in progress.

The eighth zone, Title 25 – known as the city's current LDC – has been reduced, but remains in certain areas (such as neighborhoods covered by Neighborhood Conserva­tion Combining Districts) and certain planned unit developments. Consultant John Miki noted during a press meeting on Tuesday, Sept. 19, that the latest draft now includes the South Austin Combined Neigh­borhood Plan, zoned for Title 25 in draft one. The new version also includes more opportunity for housing growth by implementing mixed-use zones to allow some residential in previously commercial-only districts. Alina Carnahan, CodeNEXT's public information specialist, said that areas such as Lamar & Braker, William Cannon & Manchaca, and Lamar & 34th Street represent "geographically diverse" areas of town, which will now see "clusters of mixed-use." Mapping consultant John Fregonese added that mixed-use zoning will come in handy as large warehouse-sized stores like Toys "R" Us, which filed for bankruptcy earlier this week, go out of business. Once these stores have shuttered, the lots they previously occupied will provide more "marketable" opportunities for housing.

Consultants say they're also working to further protect neighborhoods from demolition – a major community concern from the first draft. Miki explained that one new incentive to keep existing houses intact, using a modified version of the McMansion Ordinance, would give property owners extra leeway to build an addition onto an existing two-story house by going farther back on the lot or allowing a single-story house to build a second story in the rear, only if they preserve the original structure in the front. "What you can't do is come in and tear down the entire lot and build a two-story house from the front all the way to the back," he said. "We see that as a way to incentivize the preservation of existing housing."

Shaping additional preservation tools is something Miki said consultants will continue working on with staff and city commissioners in advance of draft three, due for release Nov. 28. Other works in progress include accessory dwelling unit standards, which will be consistent across all zones. The biggest question regarding ADUs appears to be their maximum square footage – proposed in draft two to be 1,150 square feet, which could produce missing middle housing for families. That seems large, but to build an ADU that size would require a large lot, and for the existing house to be under a .25 floor-to-area ratio (the square footage of buildings, divided by the square footage of the lot).

But the changes are still not enough to comfort concerned residents. One speaker during the public comment portion of Tuesday's joint work session of the city's land use commissions (the Planning and Zoning & Platting commissions), called the code "screwed up." Community Not Commodity, another neighborhood coalition, voiced its displeasure with the draft on Monday, when it abruptly canceled a Tues­day morning press conference designed around unpacking the latest draft because "CodeNEXT 2.0 is so bad it cannot be properly analyzed in time." Their email also listed a litany of issues ranging from an overall lack of summaries of changes to the missing data regarding flood mitigation and any information regarding displacement concerns. CNC spokesperson (and Austin Neighborhoods Council board member) Mike Lavigne told the Chronicle that the new draft "only further incentivizes demolitions and displacement in favor of attracting newer, wealthier, and, frankly, whiter residents."

CNC aren't the only ones upset over the omitted summaries. After consultants Miki and Fregonese gave their two-hour presentation on Tuesday night, PC Chair Stephen Oliver scolded CodeNEXT staff and consultants for not including 1) a summary of public comment from draft one; 2) an explanation of the criteria used for the draft two map that may be different from the first; 3) a list of topics that are not yet finalized; and 4) a summary of changes from draft one to draft two. Oliver said that a summary of changes from the staff's perspective is "absolutely critical." His request was not a line-by-line comparison of new work, but an overview of major changes. The necessity, he said, extended beyond helping commissioners get a handle on draft two. "The public needs to know, needs to see it," he said. "The public needs to understand why."

CodeNEXT's executive project lead Greg Guernsey promised to have some summary of changes and map criteria to commissioners within a week. With more than 6,900 comments from draft one's text and map, tracking comments and their resolution could be trickier, but Miki noted that a system was used to track comments and could likely help answer where they contributed to draft changes. Land use commissioners have their next joint meeting scheduled for Tuesday, Oct. 3. Meanwhile, you can see the code and map, and comment on both, at codenext.civicomment.org.