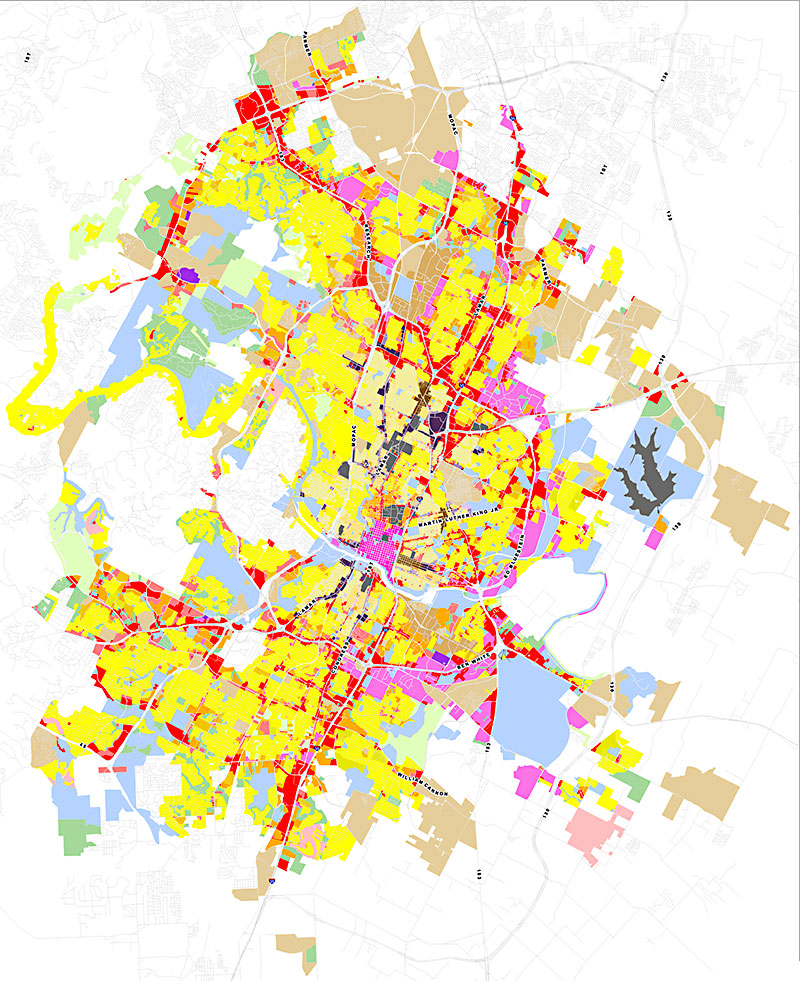 The Planning and Zoning & Platting commissions received a rapid preview of CodeNEXT Draft 2.0 (to be released Sept. 15) during their joint work session on Tuesday, Sept. 5. The meeting, scheduled for an hour-and-a-half, was pushed back nearly 40 minutes until enough commissioners from both ZAP and PC arrived to make a quorum. After the last PC commissioner trickled in, consultant John Miki gave the quickest presentation yet on the proposed land use code rewrite.

As previously reported, the greatest change from the first draft is in the removal of transect and non-transect zones. Instead, zones citywide will be subject to a "consistent approach," which will include prescriptive building envelopes similar to the McMan­sion "tents," and standard lot sizes. According to Miki, the upcoming draft will group zones into "theme" categories and then smaller groups. For example, the second draft will introduce Residential House-Scale Zones – R1, R2, R3, and R4 – with the numbers representing the "typical" number of units allowed on that particular property. Addi­tional proposed zone categories are Resi­dential Multi-Unit, Mixed Use, Main Street, Regional Centers, Commer­cial & Indus­trial, and Other (which will cover conservation lands, parks, and "former Title 25" – i.e., areas still using today's zoning).

Mixed Use will replace the previously proposed Commercial Zone; that distinction has been altered to allow for some residential use in these areas. This change is a direct response to feedback asking that CodeNEXT increase housing options throughout the city (though it remains to be seen if additional housing options will spread to West Austin). Miki told commissioners that this change is "really important" because it "allows us to think about what happens throughout the entire city. Where can we have more housing opportunity?" Mixed Use will be broken into groups – MU1-MU5 – ranging in intensities, with the biggest difference between groups being the height allowed – a common thread for most zone themes in this model.

To maximize conformity overall, the new draft has simplified and standardized height limits and lot dimensions and has made building forms and placements more flexible. Miki said consultants were committed to adding "more consistency, more flexibility, and a 'single spectrum'" to the second draft. As he put it, "CodeNEXT improved upon the existing land development code and simplified existing tools, but maybe it still had too many tools so we've simplified it even more." With these changes, consultants and CodeNEXT staff hope to ease homeowners' stress that the rewrite will make many existing properties nonconforming.

Later on, consultant John Fregonese discussed the mapping work his firm has been doing in tandem with the rewrite, specifically comparing Austin's current LDC with the CodeNEXT first draft, and the incoming second draft. According to calculations he made last month, the latest rewrite could produce more than 179,000 units of missing middle housing, which more than satisfies the city Strategic Housing Blueprint's recommendation of 135,000 new units, though Fregonese shied away from calling the homes that would be created "affordable." The existing code, he said, "falls a bit short." The new housing stock will be almost all in multi-units and mixed-use spaces – because, Frego­nese informed commissioners, "you frankly don't have room to do any more" large lot, single-family homes. "You've run out of those big parcels of land." But in draft two, Austin residents will be provided with smaller, single-family units (i.e., townhouses, duplexes, ADUs, cottages, etc.). "There's a lot of that missing middle in [draft two], and it's kind of substituting for that single family." He added, "I imagine if people really, really want that they'll go beyond Austin. But if you want to live in Austin, you have some options."

In the remaining minutes, Fregonese clarified that the mapping had taken into account FEMA's 100-year flood data, but in light of Hurricane Harvey he also hopes to map out 500-year flood data. The updated map will be released concurrently with draft two.

Consultants and staff gave essentially the same presentation to City Council on Wednesday, with a little more time for questions, but not a lot of new detail. The next joint meeting between PC and ZAP is scheduled for Tuesday, Sept. 19, four days after CodeNEXT staff unveil the second draft on Sept. 15.