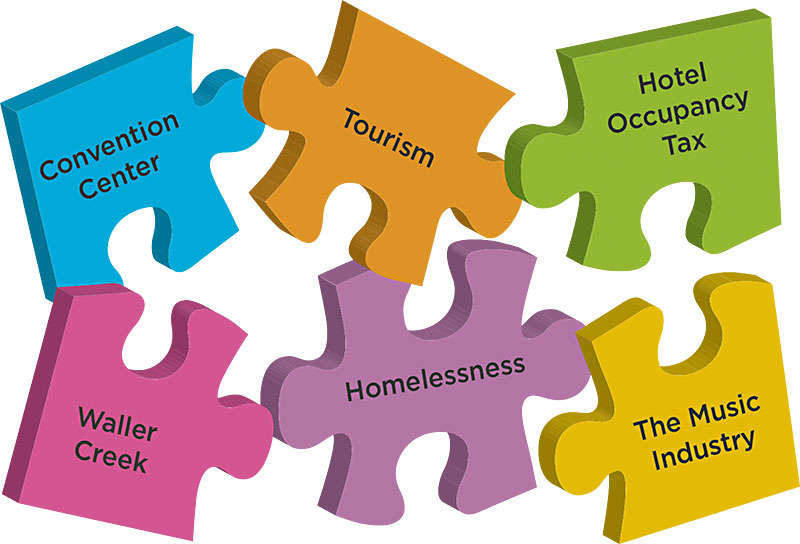 Still not coming together …

There's no regular City Council meeting today (Sept. 7), and hardly room for one, as this week has been preoccupied with special-called meetings on the FY 2018 budget (Tuesday and Thursday) and another (Wednesday) on CodeNEXT (second draft expected this month). Council members are trying to determine whether they can find sufficient funds to maintain existing programs, let alone fund new initiatives, while the financial horizon is turning partly cloudy (e.g., estimated sales tax revenues, always a volatile income stream, look slimmer, and Hurricane Harvey aftermath likely won't help). The CMs are also hoping to have sufficient consensus on a host of potential budget amendments – a broad variety of potential additions, subtractions, and shuffles – to be able to proceed with the formal budget "readings" with a minimum of fuss, next week (Sept. 11, 12, 13).

Already jettisoned is the grand plan for a "property tax swap" with Austin ISD, which Mayor Steve Adler withdrew a couple of weeks ago, when it became clear that the financial and political groundwork couldn't be clarified sufficiently to get a swap in place this year. ("Council: Downtown Puzzle or Rubik's Cube?" Aug. 28). That leaves the city manager's proposed budget – with a median home tax-and-fee increase of 4.6% – as the current working document, with Council's daily revisions of the "Concept Menu" as the work-in-progress ("City Budget Squeezed Between Basic Costs and State Neglect," Aug. 11).

Under the staff's estimates, there remains only $5 million in uncommitted operating ("General") funds for Council to distribute among many millions more in unmet needs – everything from quality-of-life initiatives, authorized but unfunded police officer positions, social service programs surviving on "one-time" funds, and the always underfunded Parks and Rec Department. Council members are floating various proposals to move money around, cut back some things to make others possible, and horse-trade resources toward various changing priorities …

That's this week's work, although last week's is lurking in the shadows. In the headline action at last Thursday's regular meeting (Aug. 31), Council unanimously agreed to move a percentage of hotel occupancy tax funds (which have been growing) into a pot designated for "heritage preservation" (as required under state law). The allocation is 15%, to come out of funds currently allocated for the Convention Center and its marketing wing, "Visit Austin" (aka the Austin Convention & Visitors Bureau, or ACVB). That decision came after days of dais tension over potential conflicts between a straight HOT transfer and the mayor's proposed "Downtown Puzzle" – a more complex scheme that (in very brief) would raise the HOT rate (currently 15%) to 17%, expand the Convention Center, trigger local hotels to form a Tourism Public Improve­ment District, and create a funding stream to address homelessness as well as support the local music industry and other cultural endeavors.

The dais was split on the HOT move – with Adler particularly anxious, and tensely sparring with his colleagues, over its potential effects on the Puzzle – until there was agreement that staff would first analyze the effects of the funding shift on the overall plan (and CC and ACVB programs) before any actual budget allocation. That's supposed to happen this month (with the postponed Puzzle returning to the dais Sept. 28); meanwhile, Council will be making its budget decisions under quite a bit of uncertainty, including still-being-negotiated public safety contracts (Austin Police Assoc­ia­tion, Austin Firefighters Association, and Austin-Travis County EMS Association).

That's a lot of moving parts, as well as plenty of additional business. More highlights from last week's meeting:

• About That Budget: Council adjourned early Friday morning (just before 1am), closing on its second and final budget hearing, gathering public testimony on late-night priorities. There was a strong thread for more parks funding; another from criminal justice advocates to freeze the police budget and end the meet-and-confer process altogether; countered by testimony for more police officers (most specifically the 12 positions authorized last year but never funded); and heartfelt support for increased social service (public health) spending and related initiatives.

• Homelessness, cont.: The mayor's Puzzle in temporary abeyance, a resolution sponsored by Mayor Pro Tem Kathie Tovo directs staff to research other prospective "dedicated funding streams" to address homelessness; another by Council Member Ellen Troxclair (also the sponsor of the HOT switch) would pilot a program borrowed from Albuquerque, offering temporary employment to homeless persons (the dais added some guarantees about adequate wages); a third (sponsored by D5 CM Ann Kitchen) would find ways to promote public interactions with homeless folks as alternatives to panhandling.

• Tee-Totaling: The evils of Demon Rum provided a running subtext to the meeting. CM Jimmy Flannigan persuaded his colleagues to narrowly rescind a previous zoning decision against a liquor store off Highway 183, on the grounds that the 4-5 minority rejection vote should instead have a full dais hearing (with slim prospects of a reversal); another liquor store, off Howard Lane, died under heavy neighborhood artillery; and the pupils at Winn Elementary will continue to be protected from adult beer drinking at the Wingstop across Manor Road.

• SB 4 to Come: CM Greg Casar proposed a resolution to require staff tracking of all city enforcement actions related to the Lege's SB 4, the new anti-"sanctuary cities" law. With the law largely overruled and under continuing legal challenge, the resolution was withdrawn, perhaps to resurface on another gray day.

The evening's musical honoree, Dickie Lee Erwin, serenaded Council and the public with his tune, "No Regrets" – at least, too few to mention.

A version of this article appeared in print on September 8, 2017 with the headline: Still Puzzling