New Laws From the Lege Set to Go Into Effect

Get to know Texas' new rules 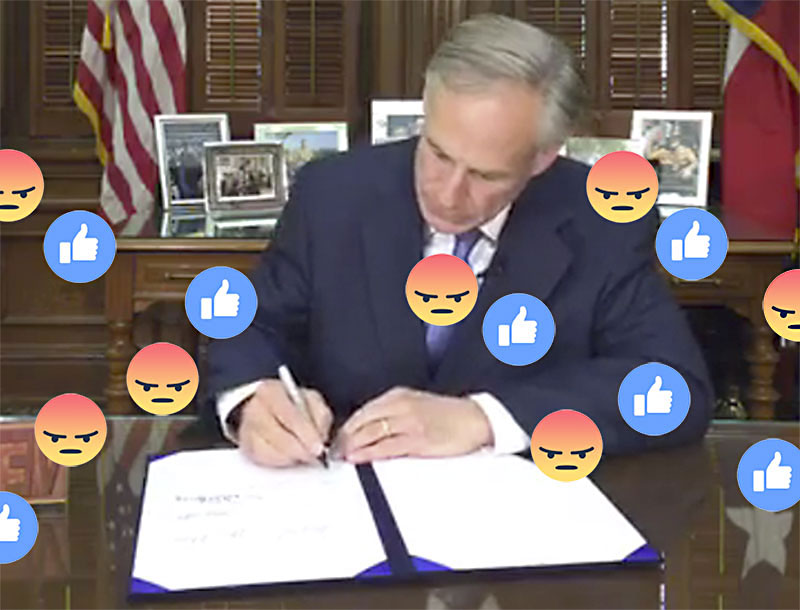 Greg Abbott signed SB 4 into law via Facebook Live in May.

Texting While Driving Ban (HB 62) A long-awaited statewide ban on using electronic devices while in motion; however, it pre-empts a slate of stronger local rules in cities like Austin. – R.W.

"Papers Please" (SB 4)* Peace officers can now ask for proof of citizenship status of anyone they detain, as at a routine traffic stop. And local law enforcement must comply with now voluntary U.S. Immigration and Cus­toms Enforcement detainer requests. The law also applies to college campuses. (Austin and other cities filed suit against SB 4 and await a court ruling.) – Mary Tuma
In a Wednesday ruling (after this story went to press), U.S. Judge Orlando Garcia blocked major portions of Senate Bill 4, which means it will not go into effect as planned on Sept. 1. Read Mary Tuma’s update.

Burying Fetal Remains and Banning D&E Abortion (SB 8)* This anti-choice package law forces abortion patients and providers to bury or cremate fetal and embryonic remains and bans D&E, the safest and most common type of second trimester abortion, without exceptions for rape or incest. Abortion providers have succeeded in stopping a separate and similar fetal remains rule in court (the health department has until Dec. 1 to come up with new rules) and have filed suit against SB 8's D&E ban*. The law also prohibits the donation of fetal tissue from abortion to medical research and redundantly bans intact dilation and extraction (D&X), already illegal in the U.S. – M.T.
On Thursday, Aug. 30, U.S. Judge Lee Yeakel temporarily blocked the D&E ban from taking effect on Friday, Sept. 1. The order will expire Sept. 14, at which point a preliminary injunction hearing will be held.

Protecting Good Samaritans (HB 478) Civil liability protections for those who break into a car to save a child or disabled person. (Texas already makes an exception for criminal charges.) – M.T.

Preventing Lunch Shaming (SB 1566) This was packed into a broader school district management flexibility bill: When parents run out of money to pay for their child's school lunches, they'll be given extra time to come up with the cash so the incident doesn't lead to public shaming for their kid. – M.T.

Anti-Cyber Bullying (SB 179) Ups the punishment for anyone caught harassing individuals under 18 with the intent to provoke self-harm via social media or text messages to a class A misdemeanor, and requires schools to intervene and report possible online bullying cases; allows parents to temporarily halt bullying social media accounts. - M.T.

Anonymous Lotto Winners (HB 59) Winners of at least $1 million can prevent the release of personal information to the public and media. – M.T.

Unlawful Stop and Search (SB 1849) Named after Sandra Bland, who died in a Texas jail, SB 1849 was intended to crack down on groundless traffic stops. Instead, it just focuses on mental health care access. Bland's family has condemned it. – R.W.

Breaking Up the Foster Care System (SB 11) Takes foster care placement responsibilities away from Child Protective Services and hands it to local government and nonprofits. Supporters call it community-driven; opponents call it privatization, and fear religious groups will turn away kids of different faiths and LGBTQ youth. – R.W.

Protecting Medical Staff From Attacks (HB 280) Half of all Texas nurses experience physical assault while on duty. HB 280 establishes a grant program to fund risk reduction and avoidance. – R.W.

Child Welfare Providers' Religious Liberties (HB 3859) Protects child welfare providers' right to discriminate by guarding them from legal repercussion should they deny would-be foster parents on the grounds of sexual or gender identity or religious affiliation. It also lets caregivers deny aid (such as abortion, emergency contraceptive, or hormone access) to youth in their care if it goes against their religious beliefs. – Sarah Marloff

A version of this article appeared in print on September 1, 2017 with the headline: Introducing Your New Laws (as of Sept. 1)