Council Member Leslie Pool has been fending off some heat this week for what critics saw as a poorly timed tweet posted this weekend, as Hurricane Harvey was still dumping on Houston, in which she linked the storm's flooding to Austin planning policy arguments. "To any who dismiss need for Austin's zoning & imperv cover rules, I give you Houston," she wrote on Sunday, linking to a story about rising death tolls from The Guardian. Pool, whose district covers much of North Central Austin, was quickly chided for using the disaster in Houston as a talking point; several responses to the tweet criticized her for pushing anti-density policies that encourage sprawl into flood-prone areas. Even Pool's regular nemeses at the Real Estate Council of Austin took the opportunity to claim a moral high ground, responding in a Monday statement: "Politicizing this ongoing catastrophe while it's still developing is insensitive, irresponsible and flat out inaccurate. It's unlikely that any level of zoning or impervious cover regulations would safely protect a city from the power of a Category 4 hurricane that has dropped more than 30 inches of rain over a 24-hour period." (Experts are now saying more than 50 inches of rainfall hit the region.)

Asked for comment, Pool responded: "We must be focused on helping our neighbors in Houston and the surrounding communities get through this disaster and rebuild. Going forward, we need to have some hard conversations about how we're going to address the flooding dangers posed by climate change, our infrastructure needs, and increasing impervious cover across the region." 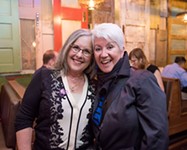