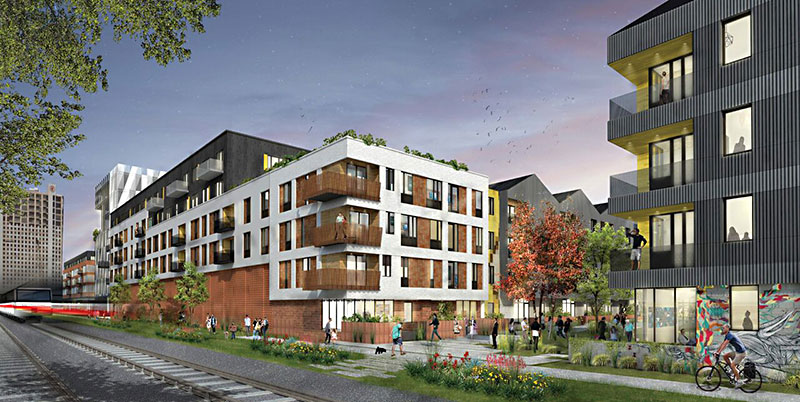 Austin's Habitat for Humanity will add to the affordable housing units built within the Plaza Saltillo Transit Oriented Development after a unanimous vote from City Council last week amended the development's existing regulating plan to include additional density bonuses. Habitat recently acquired 1409 and 1411 E. Fourth – two addresses within the TOD, which stretches from I-35 to Comal. Last Thursday's vote, led by CM Pio Ren­teria, will waive existing standards on the site – possibly including height limitations, parking reductions, maximum density, and yard setbacks, in order to provide a multifamily development, intended for ownership, with 75% of the units offered at a mix of affordable rates ranging from 40-80% median family income. The city manager's office will evaluate current density bonus programs associated with TOD regulations and make recommendations on whether the city should establish a new program category to further incentivize the construction of on-site, long-term affordable housing. For now, however, Council has instructed that these additional bonuses will be limited to the site owned by Habitat.

Renteria told the nonprofit that he's hoping for a "majority" of multi-bedroom units, but stopped short of requiring it (as Mayor Pro Tem Kathie Tovo proposed) for fear of inadvertently halting the development. Tovo agreed, but encouraged Habitat to follow through with family-friendly units, which she said could help keep neighborhood schools like Eastside's Sanchez Elementary open. Sanchez currently faces possible closure due to underenrollment. Habitat's Vice President of Client Services Wayne Gerami addressed the tradeoffs of offering multi-bedroom units: the more space a unit takes up, the more expensive it becomes: "When you're dealing with affordable housing ... there's a limit on how much we can raise the price of that and still call it affordable." But he reassured Council that Habitat will push for "as many bedrooms as we can fit in any given unit."

Prior to Council's vote, Renteria called this a once-in-a-lifetime opportunity "where we have a development that is going to offer the opportunity for homeownership, especially in a condo development right Downtown. ... It's always been my goal here to see these kinds of projects that are going to benefit our people who have lived in our community for so many years and now are being displaced."

Council: Not Only the Grove
Does anybody speak Zimmerman-ese?