Congressional Districts to Get Re-Mapped 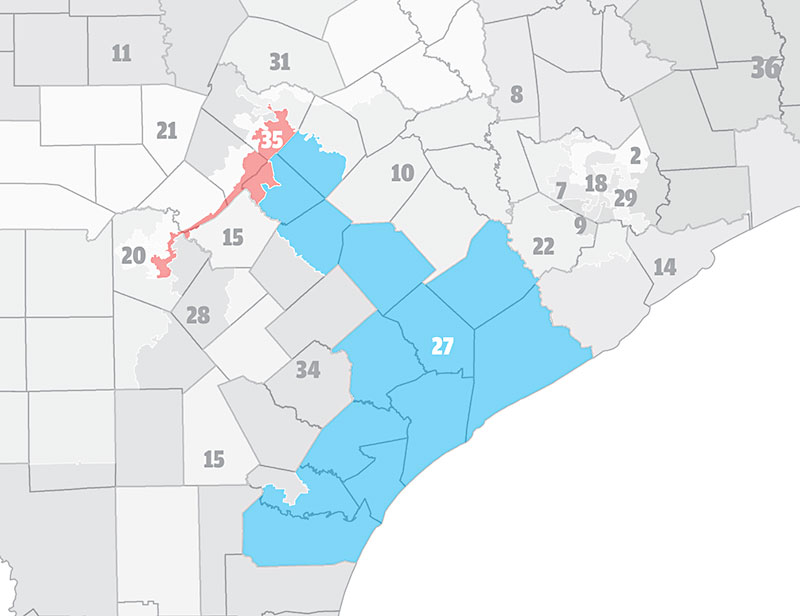 Republican lawmakers illegally gerrymandered two congressional districts – including one in Travis County – to deliberately suppress minority voters. That's the latest in a long line of rulings from federal judges, who now order that the seats held by Austin Democrat Lloyd Doggett and Corpus Christi Republican Blake Farenthold must be redrawn before filing opens for the 2018 primaries. Welcom­ing the decision, Doggett said, "What Republicans did was not just wrong, it was unconstitutional."

The order, signed on Aug. 15 by District Judge Xavier Rodriguez on behalf of a three-judge panel, is the latest blow to the GOP's attempts to control Texas politics. The maps in question were originally drawn by the Texas Legislature in 2011 with a simple underlying plan: first, to rebalance Doggett's CD 35 seat from Austin-based to a bizarre split between Austin and San Antonio (and the thin slice of I-35 between them), making the veteran Dem more susceptible to a Bexar County primary challenger; then, second, to turn CD 27 into a safe seat for Farenthold by bolting together every GOP-friendly precinct between Del Valle and Corpus Christi. Unfortunately for Republican cartographers, they could only do this by violating the U.S. Constitution and the Voting Rights Act.

That's why they faced six years of legal challenges to both congressional and House maps, and why Texas currently uses court-approved interim maps issued in 2013. The state has continued to defend those amended maps, even though the Western District of Texas court made it explicitly clear on their original adoption that they were imperfect, and must be fixed at a later date.

With this ruling, later is now – the judges gave the state until Aug. 18 to say whether the Legislature will be recalled for another special session to draw new maps. If the state does not reach that deadline, the court will reconvene on Sept. 5 to draw the map for them.

Noting that this is the seventh legal defeat for the state since the maps were drawn, and the third this year, Lone Star Project director Matt Angle said that "the court's decision makes clear that intentional discrimination has become business as usual for Texas Republicans."

Even after all those defeats, this ruling was particularly brutal against the state's stance, and singled out now-Governor and then-Attorney General Greg Abbott for the quality and intent of his legal advice. The court also savaged attempts by Abbott and current AG Ken Paxton to claim the 2013 maps fixed everything, writing that the "discriminatory taint" of gerrymandering was not removed by the interim maps, and that the Lege not only failed to act to fix them, but "intended any such taint to be maintained but be safe from remedy." Paxton, predictably, responded that he would appeal the ruling to the U.S. Supreme Court.

Still, Tuesday's result is not a complete success for the plaintiffs. Both the NAACP of Texas and the Mexican American Legislative Caucus had hoped for rulings against other districts near Dallas and Houston. But we're not done with the courts yet: The same three judges are still considering the legality of the state House maps.

A version of this article appeared in print on August 18, 2017 with the headline: Gerrymanderland