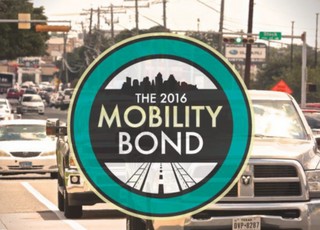 Lest there be any curmudgeons claiming that the $720 million transportation bond did nothing, the city of Austin has come up with a nifty online tool to let citizens track the progress of individual bond projects, from neighborhood sidewalks to major highway improvements. "We want to make sure people have a good idea of what we're doing and where we're at," explained Mike Trimble, director of the corridor program – the $482 million centerpiece of the mobility bond – at the Tuesday unveiling of the portal, named Project Explorer. The city has paid Socrata, a data visualization firm, about $38,000 to create the portal, and another $48,000 a year to maintain it as the bond projects roll out over the next eight years. (Socrata also provided a similar tool, released a week earlier, that allows people to dig deep into the city budget.)

Those hoping to snoop around the city's various mobility projects can go to capitalprojects.austintexas.gov. Click on "local mobility," for instance, and a map of the city will pop up showing planned projects. Click on one of those to see how much progress has been made on the specific project, including how much of the money allocated for it has been spent. The portal also includes the contact information for whichever city staffer is leading the project.

Demonstrating the tool for reporters on Tuesday, corridor program spokesperson Sara Behunek noted that the portal showed all the projects on track and on budget. "And it's going to stay that way for the full eight years," she said, with a chuckle.