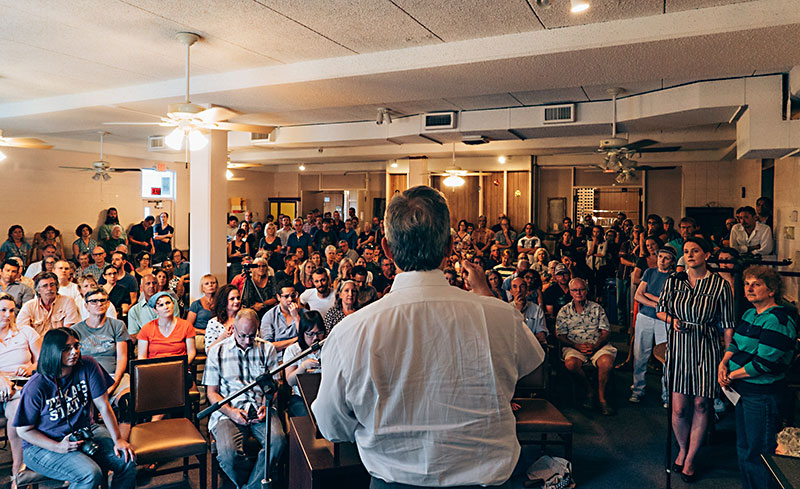 Mayor Steve Adler spoke to the Bouldin Creek Neighborhood Association about CodeNEXT on Tuesday night. "I wish there was a way for us to, in the Downtown core area, without subsidy, without doing something outside the market, preserve for people the $800-900 rent on a small bungalow," he said. "But we can't do that. One of the reasons why we need to do CodeNEXT now is that we could have done that here, had we started 10-15 years ago. And there are parts of the city right now that if we don't do something today, other people are going to be sitting in this room ... wondering why somebody didn't do something 15 years ago when there was still a chance." (Photo by Annalise Pasztor)

Sunset and Sine Die? Seven days and counting until the conclusion of this summer's special legislative session, and while lawmakers in both chambers pick and choose which of Gov. Greg Abbott's 20-item agenda will make it over the finish line, not a single piece of legislation has actually passed.

War On Women continues: Attorney General Ken Paxton is asking the 5th Circuit U.S. Court of Appeals to throw out a federal court's decision that kept Medicaid services available to Planned Par­ent­hood patients in the face of a legal challenge by the state. The state's case – based on discredited anti-choice undercover video – was criticized by U.S. Judge Sam Sparks, who ruled in the reproductive health provider's favor earlier this year.

American baseball hero Don Baylor passed away on Monday at St. David's South Hospital. He was 68. The Austin native grew up in Clarksville and attended Austin High before getting drafted by the Baltimore Orioles in 1967. He won a championship as a member of the Minnesota Twins in 1987, and the MVP award in 1979.

Professional soccer will return to Austin in 2019, after a three-year absence. Check "Public Notice," Aug. 11.