Cross Creek Up To Code? 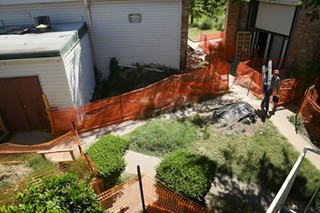 In the continuing saga of the city's code enforcement department vs. substandard-housing owners, the Building and Stan­dards Commission heard an update last Wednesday on the progress of repairs being made at the Cross Creek Apart­ments in North Austin. The undertaking was ordered in April by District Judge Scott Jenkins after more than 200 photographs of violations around the property were submitted by city inspectors to support an injunction. David Ken­nedy, the brother-in-law of deceased former complex owner Royce Mulholland, said at the meeting that the repairs should be wrapping up this week.

NAHC Cross Creek Apartments LLC, the proprietor of 1124 Rutland, has been on the city's repeat offender list since 2014 and has racked up more than $1.5 million in fines to date. Code inspector Hilda Martinez, who visited the property last week, said that progress was being made, and that the owners were showing good faith toward complying with the injunction.

However, on behalf of the Cross Creek Tenants Association, three-year resident Steven Frishmuth said that some of the repairs seemed to be "done on the cheap." He also said that there was a significant amount of maintenance required inside the apartments, although the court order only addressed the exterior.

Kennedy reminded the board that Frish­muth was part of the civil lawsuit and therefore had an incentive to "muddy the waters." Commissioner Wordy Thompson followed up, asking Kennedy if he did not also stand to gain from the outcome of the case. Ken­nedy clarified that he was not receiving any payment, and was managing the project as a favor. Still, Chair Charles Cloutman reminded him to keep a good attitude moving forward. "I'll applaud everything you've done," said Cloutman, "but being defensive about it won't help your place in it. You must understand where we all come from. You're new to the fight. We've been at this awhile. Mr. Mul­hol­land was not forthright, as you know from the past; his comments were not based in reality."

Rumors are spreading among tenants that if the outstanding fines are waived after a successful inspection of repairs, the property will be sold to an interested buyer. Kennedy said at the meeting that a sale was one option of many. The final inspection was scheduled for Aug. 1, although it could be weeks before any findings are disclosed. 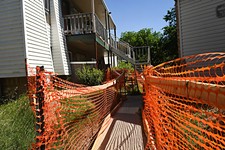