Tracking the fallout from the special session 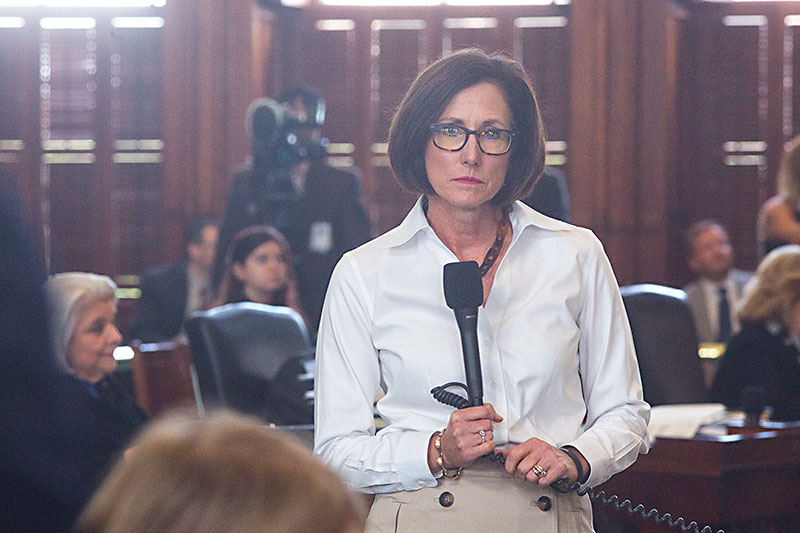 • SB 3, Sen. Lois Kolkhorst's latest version of the bathroom bill, passed out of the Senate on Tuesday night with only four of the 30 proposed amendments, including an unexpected addition from Sen. Joan Huffman, R-Houston, that allows drivers' licenses and gun licenses to serve as proof of gender. – Sarah Marloff (Photo by Jana Birchum)

• As widely predicted, the Senate is speeding through Gov. Greg Abbott's agenda, often with long hours and suspended rules, while the House has been meeting for only a few hours on weekdays, and seems in no hurry to move on anything. With the session time-limited to end on or before Aug. 16, the House may well hold the upper hand. Both the House and Senate have now approved the only must-pass bill of the special session: the sunset legislation keeping the Texas Medical Board and several other health-related agencies open. Rep. Eddie Rodriguez, D-Austin, called for his fellow lawmakers to end the special session now and not continue with Abbott's agenda. "We are now in a position to adjourn sine die and end this charade," he said. – Richard Whittaker

• The Senate has passed two school finance bills, at least one of which looks set to receive short shrift in the House. On July 24, senators voted on party lines to pass SB 2, a school voucher bill, and SB 16, establishing a 13-member school finance commission. The House has repeatedly rejected other voucher schemes, and critics of the commission accuse it of being nothing but a delay tactic for real debate and reform. – R.W.

• SB 17 by Sen. Lois Kolkhorst, R-Brenham, extends the Maternal Mortal­ity and Morbidity Task Force, a group studying the alarmingly high death rate among new moms in the state, by four years. However, a handful of attempts by Democrats to effectively reduce the rate – instead of just study it – by expanding health coverage were slapped down, casting doubt on whether or not Kolkhorst and the Senate GOP are truly concerned with maternal mortality or just paying lip service to balance out anti-choice votes. The full Senate granted SB 17 unanimous approval on Tuesday. – Mary Tuma

• On Wednesday, the Senate granted initial approval to SB 8 by Sen. Brandon Creighton, R-Conroe, a revival of failed regular session legislation that would bar insurance coverage for abortion care, with no exception for rape or incest survivors. Under the potential law, women would be forced to somehow predict the need for abortion and purchase supplemental coverage. As Nan Kirkpatrick of the Texas Equal Access Fund testified, the bill "stigmatizes" abortion by painting it as something other than health care, which appears to be the point for some senators. "I disagree with anyone that says abortion is health care. It's taking the life of a baby," said Sen. Donna Campbell, R-New Braunfels. – M.T.

• The full Senate gave final approval to Campbell's SB 10 on Tuesday, requiring doctors to report abortion complications to the state health department within 72 hours (requirements currently allow for 30 days) and submit information including the patient's race, marital status, and number of previous abortions. Doctors in violation would be slapped with a $500 fine. The Senate also passed the similar SB 73 by Sen. Bryan Hughes, R-Mineola, which increases reporting requirements for minors who undergo abortion to include whether or not they obtained parental consent or a judicial bypass. Pro-choice advocates called the measures an unnecessary barrage of requirements meant to burden clinics. – M.T.

• Early Wednesday morning, the Senate on second reading passed SB 4 by Sen. Charles Schwertner, R-Georgetown, to prohibit transactions between county and city governments and abortion providers and affiliates. With state and federal law already banning taxpayer funds from going toward abortion care, the bill encompasses lease agreements – a direct shot at the city of Austin's nominal lease to Planned Parent­hood on East Seventh. Sen. Kirk Watson, D-Austin, stressed that the Down­town center doesn't offer abortion care, so in effect, SB 4 could shut down a clinic that provides preventive health care, including cancer screenings and birth control. (See "Senate Speeds Through Anti-Choice Bills" for a full rundown of the Senate's war on women's health.) – M.T.

• The Senate voted late on Tuesday to approve Hughes' SB 7, which would shut down the state's collection of membership dues for certain public employees who are members of labor unions. – Chase Hoffberger

• The Senate also approved SB 19, by Sen. Jane Nel­son, R-Flower Mound, which would borrow money from the Health & Human Services Commission to help pay for a $193 million increase to statewide teacher bonuses and a $212 million boost to a health insurance program for retired teachers. – C.H.