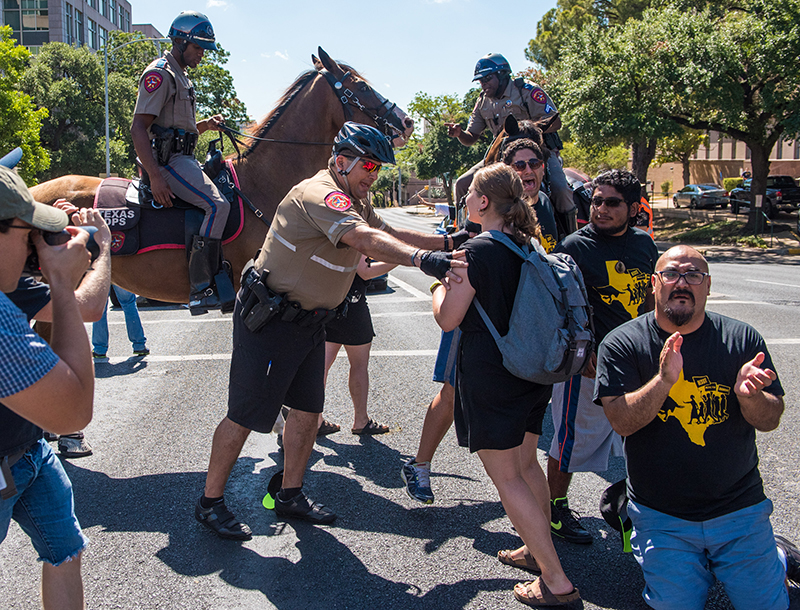 DPS troopers ward off a group of demonstrators Wednesday morning during a protest against threats to the Deferred Action for Childhood Arrivals (DACA) and in support of a new DREAM Act bill in Congress. Fifteen people were arrested during a sit-in at East 15th & Congress, four of whom have DACA and therefore risk deportation or other penalties. (Photo by David Brendan Hall)

No City Council this week, but the circus returns to town next Thursday, with the budget expected to take center stage through August.

Where's Our Invite? Mayors from five major Texas cities, including Austin, have been left out of meetings this week with Gov. Greg Abbott to discuss local issues at the Texas Legislature. It's no surprise, considering Abbott has gone to war with urban cities by propping up legislation that targets local ordinances.

Perry Duped Again: Former Gov. and current Energy Secretary Rick Perry was played for a fool last week when he took a call from two Russian pranksters who purported to be Ukrainian Prime Minister Volodymyr Groysman. The parties reportedly talked for 22 minutes.

U.S. Senate Republicans nabbed the votes needed to greenlight debate on health care legislation to replace the Affordable Care Act on Tuesday. Vice President Mike Pence broke a 50-50 tie with his affirmative vote. All 48 Democrats (and two GOP moderates) voted against the measure.

The Texas Senate paid reverence to Austin resident Bakari Henderson on Monday. Henderson died in Greece after a bar fight on July 7. He previously served as a Senate messenger and intern for House Speaker Rep. Joe Straus, R-San Antonio. Sen. Kirk Watson offered Senate Resolution 24 to honor Henderson and pay respects to his family, seated in the gallery.

The Next Comptroller? Austin attorney and former ACC board trustee Tim Mahoney has filed preliminary paperwork to run for state comptroller in 2018.

Jumpolin is reopening, two years after the Eastside piñata store was unceremoniously demolished without advance warning. The new shop is located at 2605 E. Cesar Chavez, about a mile east of Jumpolin's original location.

The Best Medicine: Police Chief Brian Manley indefinitely suspended APD Sergeant Richard Davis after learning that Davis lied about going on vacation (and a few other things) so that he could work a secondary employment job during South by Southwest.

The special session entered its second week with the Senate speed-reading a batch of conservative measures, such as the bathroom bill and attacks on unions, while the House is still applying the brakes. (See "Lege Lines: Do Not Resuscitate" July 28.)