DPS to Charge for Forensic Work 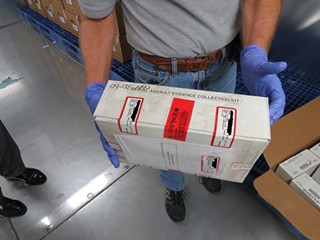 The Lege stays at it. Thanks to Rider 58 from the recently finalized state budget, beginning Sept. 1 the Department of Public Safety will begin charging law enforcement agencies for forensic analysis services. The agency announced on July 20 that the General Appropriation Act directs it to collect "up to $11,540,852 in fees" for alcohol and toxicology analysis ($75 per sample for alcohol, $150 for toxicology), controlled substances ($75-150 per sample), and DNA testing ($550 per case).

DPS Press Secretary Tom Vinger told the Chronicle that the agency was not consulted on the change in funding, but developed a plan "as soon as we were able to determine the necessary course." According to the letter DPS Director Steven McCraw sent to state law enforcement agencies, DPS is finalizing another plan to minimize the cost to law enforcement while "generating enough revenue to fund the continued operation" of lab services. Under this plan, the agency intends to provide a voucher (using state appropriations) to criminal justice agencies across the state to help cover the cost of forensic testing. The voucher value has yet to be determined, but is expected to be made public prior to the fee implementation.

Travis County District Attorney Margaret Moore expressed her disappointment on the nightly news last week, noting that taxpayers will now be responsible for an additional $220,000 to get cases to trial. Locally, the burden of ironing out this added expense will fall on county commissioners. The fee change will not affect the Austin Police Department's contract with DPS to help test APD's evidence backlog due to the closure of their forensic lab last June, but will affect the Travis County Sheriff's Office as well as other smaller and rural agencies who've long relied on DPS for free testing.

About That DPS Cutback
So, when can you get your license these days?