County Commissioners will hold a work session July 27 to discuss the county's pretrial programs and ways to better address racial disparities at the county jail, a direct response to a report issued July 13 by Grassroots Leadership. The local activist organization used the county's 2015 booking data to conclude that black people face disproportionately longer jail stays and are incarcerated at a higher rate than their white counterparts charged with the same crimes. County Judge Sarah Eckhardt told the Chronicle that while she's not surprised by the report's findings, she and County Commissioners are taking it "very seriously."

Over the last several years, the county has put in place numerous arrest diversion tactics, including cite-and-release (which encourages law enforcement to give people conducting "low-level" offenses a court date without arrest) and the mobile crisis program, which requires arresting officers take someone suffering from mental illness to a hospital instead of the jail. Eckhardt said the county is working to have representatives from the Mobile Crisis Outreach Team on premises at central booking as another step to help detainees with mental health issues. Within the next two years, the county will open a Sobriety Center, which will offer intoxicated detainees the option of submitting to addiction treatment instead of cycling through jail.

Despite these diversions, minorities are still experiencing higher rates of incarceration. While accounting for only 8% of Travis County's population, black people in 2015 represented 22% of jail bookings. As for days spent in jail, on average, white detainees were locked up for 16.88 days, while black detainees were held an average of 22.53 days. Eckhardt called the report "helpful" and said the county will continue to analyze it. "Unfortunately, there's no silver bullet for institutionalized racism," she said. "We have to acknowledge that sentencing is different for brown and black people and start having really uncomfortable conversations." Eckhardt said the county must question whether or not the pretrial program is improving lives or further entangling people in the criminal justice system.

"We've been asking this from a race neutral standpoint because we thought race neutral would fix it, but it's not working. We need to ask if this is better or worse for defendants of color."

A version of this article appeared in print on July 21, 2017 with the headline: County Commissioners to Discuss Racial Disparities at County Jail 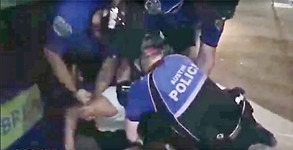