Abbott and His Armed Militia 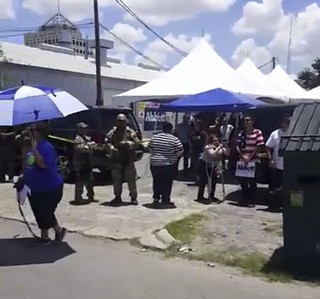 Did Gov. Greg Abbott hire an armed paramilitary group to run security on a recent campaign stop? That's what Rep. Gina Hinojosa, D-Austin, is trying to find out through two open records requests. The stop in question was held on July 15 in McAllen. When he stopped into the border town for lunch, the Rio Grande Guardian reported that the "Texas State Militia and McAllen Police Department were outside of the restaurant observing the protest." Footage taken by the sign-carrying protesters on the day showed several men in combat dress, with no visible official insignia, carrying automatic weapons (www.youtube.com/watch?v=f0drY7k_qX0). Moreover, armed militia members were seen talking with Abbott staffers.

Hinojosa has now sent open records requests to both Abbott and Texas Department of Public Safety Director Steve McCraw, inquiring exactly who invited the militia; if they were paid, and, if so, by whom; and what control the DPS or Abbott's campaign would have over the group. Writing in her role as a member of the House Committee on Homeland Security & Public Safety, she wrote that she had "grave concerns" about an unsanctioned group "asserting authority … in the name of the governor over peaceful attendees [and] the chilling effect that this demonstrated threat may have on First Amendment rights." Stay tuned for updates.

A version of this article appeared in print on July 21, 2017 with the headline: Abbott & the Armed Militia