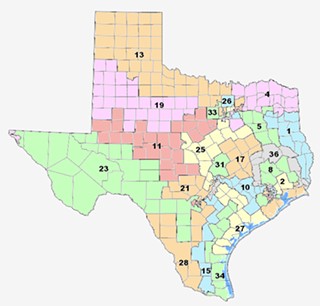 Texas' redistricting case began this week with the bombshell allegation that the state had been withholding vital documents from lawyers challenging current House and Congressional maps. Last week, before the trial began Monday in San Antonio, lawyers for one of the litigating voters' rights groups (known in the proceedings as the Quesada plaintiffs) accused the state's attorneys of violating a court order by withholding the files. The state responded by handing over more than 7,000 pages just before the weekend, but still refused to release another 113, claiming attorney/client privilege. This left representatives for MALDEF, the Mexican American Legal Defense and Educational Fund, with mere hours to skim through documents they say should have been released more than two years ago. As for the remaining 113 pages, the three-judge federal panel had a hearing Wed­nes­day, as the Chronicle went to press, for the state to justify withholding them.

During the actual hearing on Monday, several groups presented the court with potential alternatives to the 2013 interim maps, which were drawn after a prior court case found that the maps drawn by the state in 2011 violated the Voting Rights Act by suppressing minority voting power. The proposed maps would mainly affect urban areas in which the impact of racial gerrymandering is most clearly seen, such as in Dallas and Houston. However, there were some unexpected shifts suggested for what would superficially appear to be rural white conservative safe seats. Case in point: Killeen, which should have at least one majority-minority seat due to the presence of Fort Hood.

The hearing is expected to continue all week, with no date set for a ruling.

A version of this article appeared in print on July 14, 2017 with the headline: Gerrymandered Seats, Missing Documents