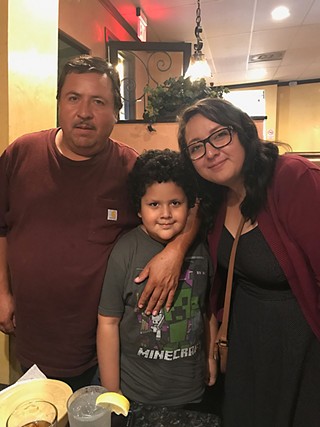 Thursday, June 29, began like any other day for the Guerrero family. Martin Guer­rero Alvarado, the patriarch, left early for work at his construction firm. His daughter Alicia hopped in her car a half-hour later, and went off to her internship at the Grassroots Leadership office in East Austin, 45 minutes outside her family's home in Dripping Springs.

But a mile into her drive, Alicia noticed that a Hays County Sheriff's deputy had pulled someone over. It caught her eye because the vehicle, she told the Chronicle, looked like her father's truck. As she got closer, the 26-year-old graduate student saw her father handcuffed next to his truck.

"It crushed me to see him when they were taking him away," she recollected, her voice cracking when we talked. "He was embarrassed and he was very apologetic. He didn't say it, but I saw it in his face."

The officer told Alicia that Guerrero Alvarado had been pulled over for rolling through a stop sign – a fact the 47-year-old father of five doesn't dispute. It would've been a routine stop, but Guerrero Alvarado was driving with an expired license. Because he had a previous citation for that same oversight, the deputy arrested him on a misdemeanor charge, according to the Hays County Sheriff's Department.

Guerrero Alvarado expected to be released from the Hays County Jail in San Marcos within 48 hours. After all, a Hays County judge had already waived his bail bond, and all he would need to do, he was told, was make a court appearance and be free to go.

"But that didn't happen," he said. Instead, he was placed on a U.S. Immigration and Customs Enforcement (ICE) hold, though he was in the process of obtaining legal residency. Per department policy, the HCSO had notified the federal agency of his undocumented status – information Guer­rero Alvarado offered, noted HCSO spokesperson Lt. Dennis Gutierrez. (Under the Secure Communities program, ICE automatically gets fingerprints of people who've been arrested or booked, then uses that information to determine whether it will take enforcement action.) ICE requested a detainer, which the HCSO honored.

Immigration rights activists say Guerrero Alvarado's situation is indicative of what will happen once Senate Bill 4 – the anti-immigration legislation signed by Gov. Greg Abbott in May – takes effect Sept. 1. SB 4 would require local law enforcement agencies to comply with otherwise optional ICE detainer requests, as well as letting officers question a person's immigration status when they're detained – like, say, during a traffic stop. Opponents say that last provision of the law codifies racial profiling, and will also lead to hundreds of thousands more immigrants being arrested, detained, and deported from the United States, a country they call home.

"This is the kind of case that we expect to see all the time under SB 4," said Bethany Carson, an immigration policy researcher and organizer at Grassroots Leadership. "Immigrant families have a lot to lose."

Guerrero Alvarado's family was desperate to free him. ICE agents had arranged to pick him up early that Sunday. Once in ICE custody, he would face deportation proceedings, and eventually be deported to Mexico, a country he left when he was a teenager. His family had less than 48 hours to get the ICE hold dropped. "I was worried," Guerrero Alvarado recounted. "I'd never been [away] from my family for more than a week. For 30 years, I've lived in this country. All of my life is here."

But to his family, ICE's timing seemed off. According to detainer policy, an immigrant booked or arrested at a local jail is taken into ICE custody within 48 hours after their detainment, not including weekends or holidays. Since Guerrero Alvarado's bond was waived on Friday, and the Fourth of July fell that following Tuesday, ICE agents should have scheduled his pickup for the morning of Wednesday, July 5.

At least that's what Alicia, her family's immigration attorney, and members of Grassroots Leadership deduced from ICE's own policy. "Monday and Wednesday. It would have been those two days," Alicia said. "We just immediately underwent this shock. We didn't know what to do."

A few hours after the protest ended, ICE dropped its hold on Guerrero Alvarado without explanation. Though his release is the "outcome that we hoped for," said Carson, "it still came as a surprise. It's very rare that ICE would release someone after requesting a detainer."

ICE spokesperson Nina Pruneda told the Chronicle that when deciding on a release, ICE agents weigh a variety of factors, including the person's criminal record, immigration history, ties to the community, risk of flight, and if the alien poses a potential threat to public safety."

"Public protest is not one of the items considered," she added.

Guerrero Alvarado said it's a relief to be home with his wife and children. But he's also spent the first week after his release rushing all over Central Texas to make up for the work he missed during his three days of detainment.

Guerrero Alvarado said he wasn't the only undocumented person held in the Hays County jail on an ICE detainer. Like him, some of them were arrested during a traffic stop for what should have been a $160 ticket, he said. Lt. Gutierrez said there are currently 48 inmates on ICE detainers in the Hays County Jail. But unlike him, many didn't have family or friends outside of the jail fighting for their release. So they're left waiting to be sent back to a country they haven't seen in decades. Under SB 4, he added, that will only become more common. "The United States talks a lot about justice," Guerrero Alvarado said, "but I don't see justice anywhere."

A version of this article appeared in print on July 14, 2017 with the headline: “All of My Life Is Here”