Habitat for Humanity Director on Affordability 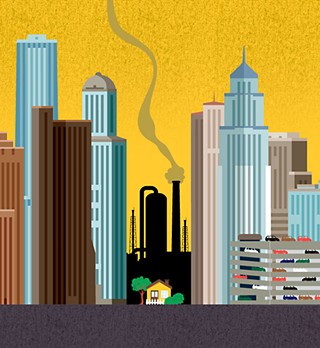 More than 50 people gathered Monday at Scholz Garten's monthly meeting of the Liberal Austin Democrats to hear Greg Anderson, director of operations for Austin's Habitat for Humanity and a member of the Planning Commission, discuss CodeNEXT and how it relates to affordability. Anderson was invited because of his 15 years of experience working with the existing land development code – in his current role, his time spent as policy director for former Mayor Pro Tem Sheryl Cole, and as a project manager with Andrews Urban Development.

Though he admitted that increasing the number of units in the city's housing market won't necessarily make housing "affordable," he stressed that "allowing for more neighbors allows for more opportunities." After the event, Anderson told the Chronicle he believes the current code is "broken" and that it's "truly imperative that we pass a new code" in order to reach the current housing goals. The city's Strategic Housing Blueprint contends that the city needs to build 135,000 units over the next 10 years to keep pace with population growth. Of those, about 60,000 must be "affordable" (for those earning 80% of the city's median family income), with 45,000 units slated for families making less than $32,000 annually. (For more on Austin's affordable housing situation, see "Building the Foundation.")

Anderson stressed simplifying the existing land use code to help streamline the city's cumbersome permitting process, thereby making the building process easier for homeowners and developers alike to produce more housing. Under the existing system, as larger developments get approved slowly on a case-by-case basis, developers maximize the bottom line. But "making the development process easier will allow for development to get online faster and at a lower cost," Ander­son believes. Of course, there's no guarantee that once (or if) the housing demand is met, prices will drop to an affordable rate.

Anderson’s perceived pro-developer perspective sat poorly with some attendees. Remarked one woman: “I worry the humanity part of Habitat for Humanity is being left out of the conversation.” Another guest noted that many cities, including San Francisco, have tried to reducing permitting requirements “and what’s happened is – it hasn’t led to more diversity or lower housing prices. … Why are we so different that this is going to work here?” Anderson responded by saying that density allows for “a lot of opportunities,” and Austin needs “a code that allows us to build more on the land that we have.” He cited “some folks in San Francisco that do run programs that have a lot of homes that are income restricted,” which “allows for a lot of opportunities through density bonuses.”

He continued: “If you want to allow Austin Habitat, allow GNDC [the Guadalupe Neighborhood Development Corporation], to get into these neighborhoods and build then we have to have a code that allows us to build more on the land that we have.”

Dave Sullivan, who sits on the CodeNEXT Advisory Group, was in attendance Monday, and took a stab at answering a couple of questions regarding affordable housing options. For one thing, he explained, the new code will require developers to match the unit sizes of the affordable and market-rate units, meaning there will have to be the same ratio of multi-bedroom units in both. "We do not have that in the existing land development code," he said.

This article has been updated to accurately reflect Anderson’s comments on density in San Francisco. That paragraph was framed in a way that lent itself to being interpreted as though Anderson believed development in San Francisco has solved the city’s affordability issues. In fact, he was speaking about the success certain programs have had on the amount of homes in the city that are income restricted.

Anderson sent us the following statement the day after we published this story.

I write in response to your article commenting on my remarks to the Liberal Austin Democrats regarding the related issues of CodeNEXT, affordability and density.

I believe that your article missed the mark in reporting my position on those three critical issues facing the City of Austin. We have seen where the current City Code and a reluctance to allow density in the urban core of our City have brought us. We find ourselves with an extraordinary lack of affordable housing that pushes people of modest means completely out of our City. I stand for using the opportunity that CodeNEXT presents to increase density in our urban core, and, most importantly, to use all available tools to effect dramatic increases in the affordable housing stock. Mine is not simply a “pro-developer perspective”, as your article incorrectly stated, but it is definitely a “pro-development of income restricted homes perspective” through the use of density bonus programs and other tools.

Your article further suggested that I pointed to San Francisco as a “great example” in discussing affordability. No one familiar with the national housing landscape would ever suggest that San Francisco has solved their affordability problems. However, after my presentation in Q&A, I did cite an example of an affordable program in that area, and I stand by that statement. The best example being the Tenderloin Neighborhood Development Corporation and a recent policy study the city did both of which recently came my way from Housing Works which is why they were on my mind.

One of the primary items that I discussed with the Liberal Austin Democrats was the White House Housing Development Toolkit. I was surprised that there was no mention of that worthy document in your story. It can be found here, and I recommend it to you and your readers.

I strongly believe we will not solve our current affordable housing crisis by using yesterday’s strategies and tools, and I believe that CodeNEXT affords all of us an opportunity to bring new ideas, new energy and new tools to bear on our community problem. Your article failed to focus on that opportunity, instead choosing to brand the messenger as “pro-developer”. I hope that future articles will more deeply address the fundamental housing issue and the strategies to be used to address that issue.

A version of this article appeared in print on July 14, 2017 with the headline: Greg Anderson on Affordability